Derek Delivers the Winning Clubs for the Tour Stars 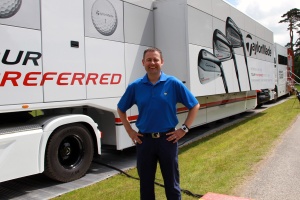 Many golfers are known for an almost unhealthy obsession with equipment.   From drivers to wedges and putters, from shafts to grips, golfers are always interested in the latest developments and technology, anything that will help their game.  While the majority of spectators in Fota this week will have their eyes on the course, a few will spend some time on the range watching the golfers and their equipment.  The tour trucks will be in Fota too, providing technical assistance, replacement equipment and minor or major adjustments for anyone of the 156 professional golfers needing a last minute fix.  With a total of €2m on offer in prize money, the Irish Open remains one of the big money events in Europe.  The golfers will look to cover every angle and equipment is one of the key areas where golfers seek consistency.  Derek Murray from Fore Golf in Killeen Castle has worked on the tour trucks on and off over the past 15 years and he has a unique insight into what goes on behind the scenes at a European Tour event.  Murray is an accomplished club builder, and works with all levels of golfer including several European Tour members.

In Fota; Titleist, Callaway, Cleveland Srixon, Nike, Ping and many others.  Most will be sporting shiny forty foot articulated lorry’s which expand into a mobile workshop, and they have made the long journey overland from the last tournament in Austria.  Derek Murray spent some time working with Cleveland Srixon among others so he’s familiar with the tournament schedule. “The tour trucks normally arrive late on Sunday evening or Monday but there was no European Tour competition last weekend due to US Open so many of the trucks arrived in early over the weekend.  We’d normally work Monday to Wednesday and then it’s time to pull out Wednesday night or Thursday morning to travel onto the next tournament.  This week it’s off to Koln, Germany for the BMW International.  I am now working as an independent advisor so I won’t be working exclusively with Cleveland Srixon during the Irish Open, but I do have a great rapport with the Cleveland boys and I have access to the different trucks.” 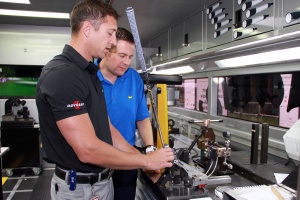 “The volume of work each week is hard to determine, and factors like the course type, layout or wind can be important factors.  Players might be looking for a new configuration to fit conditions as Murray explains: “Perhaps an additional long iron or low lofted hybrid might be built to suit the wind.  There could be 2 clubs or 20 clubs built over the three days, it just depends on the tournament and field.  Myself and the Cleveland team hold the record for 139 wedges, fitted, built and delivered into players bags in one day during the Smurfit European Open at The K Club in 2005.”

Although he acknowledges that he works with some of the top level golfers, Murray won’t be drawn into naming them.  Equipment contracts can be very lucrative for golfers, Rory McIlroy signed a deal with Nike allegedly worth €19m a year.  Hats, balls, gloves and towels are all supplied on a weekly basis by the tour trucks, to ensure the players look their best and promote their contracted brands.  As well as a new ball for every hole, players generally go through 3-4 hats and 6-8 gloves in one tournament.  As well as every head, shaft and grip, the truck will also have a stock of umbrellas, wet suits, shoes, tees and golf bags.  The tour technicians will aim to have every eventuality covered.

In an environment where performance matters, tour golfers must balance their equipment contracts and obligations with their needs on the course and that’s where Murray gets involved.  Murray was named World Clubmaker of the Year in 2010 so he’s known and trusted by his clients on tour; “He [the tour golfer] is looking for my experience and also an independent eye who is wholly focused on the player and not necessarily the brand alone.  I normally work with the players on Monday or Tuesday but never during tournament time.  I might watch a player play during the tournament but it’s just to map out some on course data.”  Many players will also have a coach on hand but there’s no crossover between the disciplines as Derek explains; “I’m not a coach but have good bio-mechanical knowledge and the knowledge to know when its swing and not club.  Any changes we make are to the club and these are instant as opposed to swing as you’re not dealing with the body.”

Derek and his Fore Golf brand has come a long way since the Irish Open was first held in Cork.  Some Cork golfers might remember one of Derek’s first visits to Cork.  It was during the 2001 Irish Open in Fota, and Derek set up shop in the Carrigdhoun Driving Range in Carrigaline.  Armed with a launch monitor and a few bags full of clubs, he set out on his journey to build better clubs for golfers.  It was a different era compared with the technologies and choices that the Naas man uses today.  Although launch monitors and technologies like Flightscope help to analyse swing characteristics, Murray still believes in the basics and trusts his instincts when it comes to watching shots and ball flight.  He’s been doing this for around 17 years and back in 1997 he opened a golf shop in Naas.   In a typical Irish experience, during a chance conversation at a European Tour event he talked himself onboard one of the custom fitting tour trucks.  That gave him an insight into club building and he went on to complete a number of clubmaking courses and after time with Golfsmith UK, and Ping and Callaway in the US he returned to the European Tour as a club builder on the Cleveland Tour Van.  In between his work on the tour he built the business in Naas increasingly focusing on club building.  Derek brought club building to the nation thanks to his very own Fore Golf Tour Truck, a mobile work shop and driving bay all housed on a 40 foot trailer.  The tour truck was a regular visitor to Cork and was in great demand when it visited Cobh golf club at their official opening in 2010.

Now settled in his new base in Killeen Castle, he still has a large customer base from Cork with an average of two or three customers per week visiting the state of the art club room and workshop in Co Meath.   He works with all levels of golfers, from tour professionals and every level in between.  It was a big move for Murray to shift the family business from their base in Naas, but’s it one that has seen the business grow and thrive; “About two years ago I first came to Killeen Castle and fell in love with the place, it looked like the perfect venue for us to move our business to.  It was in the middle of the biggest recession in golf and I had some doubts, but when you see it now and see what we’ve achieved it definitely was the right thing to do.  It allowed us to build a fantastic workshop and allows us the right space and area to build the clubs.  There are not actually too many workshops that build clubs, especially not in Ireland, this is one of the things that differentiates us in terms of what we do.  “Back in 1997 I didn’t have access to the equipment, the heads and the components.  Because of what we’ve achieved here we can now get the equipment from the manufacturers in component form.  This allows us to hand build clubs exactly to suit the players.”

The Kildare native has seen may changes over the past decade; “there’s been quite a few and mostly around the quality of shaft construction and head adjustability.  We also have our special licence to hand build the clubs from components here, we’re one of the only places in the world that are allowed to build clubs outside of the manufacturers factories.  We had a few doubts, we were changing how golf retailing was seen in Ireland, where you don’t see any clubs at all.  We’re different in that we won’t sell it to you unless we build it and we know exactly what’s going to suit you.” 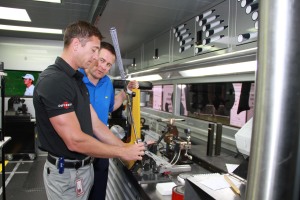 The Fore Golf experience is truly unique.  While custom fitting is widely available in most pro-shops and large retailers, Fore Golf have the ability to match 11 head manufacturers with 10 different shaft manufacturers to build a bespoke club for every client.  Between the 10 different shaft manufacturers, there are over 6,000 options available.  Details like swingweights and grips are given as much importance as any other component as a customised solution is mapped out.   Fore Golf is very much a family business with Derek’s Mum and Dad and sister Jill working with him.    Dave Williams and Aaron Morrison also form part of the Fore Golf family, Dave is a fitter and club builder while Aaron is a club builder.  After 15 years, Murray remains passionate about his profession and the unique service Fore Golf provides; “We always want people to understand why our clubs perform so well.  It’s not because we custom fit them but because we build them.  People expect to see a showroom full of clubs but we’re not a golf shop.  We have the club room where we put together the components to figure out what suits you, using the practice range and looking to your ball flight.  We look at what happens when you hit a bad shot and we build the club around that, making the club do what you can’t.  Then next door we build you a replica of the best performing test club in our workshop.  After 15 years I still love getting the calls from customers to say they’re playing better, that they’ve beaten their friends or that they’ve dropped down to single figures.  That’s the buzz that we get from this and that’s why we’re in business.”