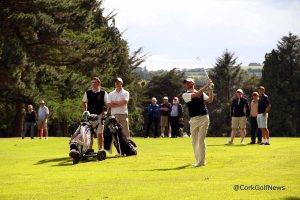 Muskerry Golf Club put their name back in the mix for the Barton Shield when they overcame Castlemartyr in the South Munster in Douglas on Sunday.  Both Castlemartyr and Muskerry stuck with the same pairings from the qualifiers.  In the first match Muskery’s Niall Gorey and Dave O’Donovan were paired against John O’Brien and Davey Barry.  The game Muskerry pair kept to their game plan with both players putting each other in good positions.  By the turn they were three up and they stretched that to four up by the time they had completed the round.  Castlemartyr had the advantage in the second pairing as Kieran McCarthy and Mark Shanahan took a two hole lead over John Waldron and Daniel Hallissey.  Despite needing to make up the four hole deficit, the Castlemartyr pair couldn’t pull away from the determined Muskerry pair.  In the end Muskerry recorded a two hole win and they now advance to play Ballybunion in the Munster semi-final.

There was Junior Cup action last weekend in Monsktown and Blarney.  Monkstown were favourites to advance from their venue and they had wins over Mahon and Fermoy on Saturday.  On Sunday morning they faced neighbours Fernhill and the hosts overcame the Carrigaline club to reach the final.  East Cork are having good year with the Club teams and they were fancied to do well in Monkstown.  The beat Castlemartyr on Saturday morning but suffered a big defeat to Cork Golf Club in the afternoon.  Cork gave youth its chance and team manager Declan O’Flynn was rewarded as David Meaney, Rory Dineen, Thomas Healy, Leon Foley and Robbie Williams saw off the challenge of the fancied East Cork side.   The win for Cork set them on a path and they went on to win well against Fota on Sunday morning.  That set up a Monkstown/Cork final on Sunday afternoon and the Island took an early lead, going ahead in three of the five matches.  Monkstown battled back to keep several games alive but in the end the young guns from Cork advanced on a 3-2 scoreline.  In the other qualifier, Muskerry and Bandon had a hard fought battle on Sunday afternoon.  Muskerry advanced and the area final against Cork takes place in Douglas GC this evening, first match is off at 5pm.

There was no joy for Cork golfers at the Kerry Scratch Cup in Tralee on Saturday.  The 36 hole event was won by Richard Knightly from Royal Dublin with a one over score of 143 on the famous links course.  Gary O’Flaherty was the best placed Cork golfer, he took the prize for the first 18 with a return of -2.  This weekend Cork Golf Club is the venue for the Irish Senior Cup.  Sixteen clubs are in action on Saturday morning and although every club has a chance, the Barton finalists will be among the favourites to make it to Sunday’s final.  Cork, as hosts and reigning Munster champions will be hoping to avenge their loss in the Barton, and both Kinsale and Bandon are likely to be in contention.  For anyone not in inter-club action this weekend