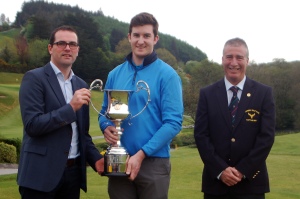 John Hickey won the Muskerry Senior Scratch Cup in Muskerry on Saturday.  The Cork member won in dramatic circumstances after a sudden death play-off which lasted for four holes.  Hickey finished the 36 holes on a score of level par after shooting rounds of 72 and 70.  He tied for the lead with Castletroy’s Andrew McCormack.  The Limerick man won in Douglas last year and rarely leaves Cork empty handed after a number of good finishes.  The play-off was an exciting affair and lasted for four holes before Hickey won with a birdie on the par three 6th.  The first hole was halved in pars, and both golfers birdied the short par four which came next.  McCormack chipped in for birdie, while Hickey two putted from just off the green.  The pair skipped the 3rd and 4th and went to half the fifth holes which was the third play-off holes.  Hickey had a chance on the fifth, he missed a six footer for birdie which McCormack got up and down from a greenside bunker.  The 6th is probably the most recognisable hole in Muskerry and Hickey fired in a six iron which finished 12 feet from the hole.  McCormack missed his long range putt and Hickey slotted his birdie putt to claim is second senior scratch cup win.

Hickey also won in Muskerry in 2015 when he won over the regulation 36 holes.  It was another great event in Muskerry, the competition had a new sponsor with Jason O’Callaghan from Ryan’s Super Valu.  The recent fine weather meant that the course was in great condition for the showpiece event.  Cork’s Gary O’Flaherty saw a return to form, the Lee Valley winner opened with a 72.  He shot a 71 in the afternoon for a 143 total leaving him one shot outside the play-off but on his own in third place.  Muskerry’s Ronan Twomey held the lead after the front round, a two under par round of 69 had him two shots ahead of Castlemartyr’s Hugh O’Leary.  Hickey & McCormack were in a large group who shot 72 in the morning round.  Twomey would sign for a 75 in the afternoon, not enough to claim the top spot but enough for 5th place.  2016 winner James Sugrue had rounds of 74 and 71 to take fifth place and the Alf Keary Trophy for best under 21.  Outside of Hickey and McCormack, Ben Murray was the only other golfer to break par in the afternoon.  The UCC student shot a 69 to take the gross prize for the second round while former Junior Scratch Trophy winner Clem Leonard won the first 18 prize.  The nett prize was won by Lee Valley’s James Murray who shot a nett 141 for the two rounds.  The Kilkenny Scratch Cup also took place over the weekend and Kinsale’s Cathal Butler took second place at the prestigious event.  Butler shot rounds of 74/71 and took the runner up spot on the countback when Michael Ryan and Luke Donnelly also finished on 145.  Mark Shanahan finished tied for ninth place with rounds of 72 and 76.