Midleton CBS Past Pupils GS won the 75th William Dwyer Trophy last week and this is the third time that the society have won the event. Previous winners in 2002 and 2006, the society are long term supporters of the event, and last week they ran away from the field with three great scores. Paul Cashman and Bernard Cashman led out the PPU team and their gross 80 was converted to a nett 71 when their nine shots were counted. Midleton’s third pairing of Derek Coll and Maurice Conway were also in the red after they shot a nett 71, thanks in part to a one over par front nine. Bob Cotter and John Moloney weren’t too far off the pace, set by their team mates, they signed for a level par 72 which beat CBS’s fourth card from Michael John Roche and Cormac Carroll. It was one of the best scoring performances in a William Dwyer final for over a decade and the two under par total saw them win by a margin of six shots.

The format of foursomes meant that the score of 214 (-2) for the best three cards placed Midleton CBS as well deserved winners. Second place went the Blackrock based Mollies and Wilton Shopping Centre took third place just one shot behind Mollies. The other finalists were Blackrock Inn, Corner House Carrigaline, Lada Tour, Senior Circle 1 and Senior Circle 2. He Senior Circle had been hoping to create their own bit of history with a third win in a row but they finished up in the pack. 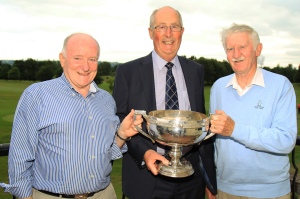 It was fitting that Cork Golf Club was the host club for the 75th staging of the event, with the prizegiving taking place in the clubhouse that was built by William Dwyer. In recent years the final has rotated between Cork, Douglas and Monkstown with the old Cork clubs supporting a long tradition in society golf. Ted Dwyer was on hand to present the famous cup and he told the large crowd a few stories about his grand uncle who gave his name to the trophy. Ted wasn’t slow in pointing out his own name on the famous trophy, as a member of the Insurance Institute team, he added his name almost 50 years ago. “It’s absolutely incredible to think that the names of every winner will be there for all time” said Ted, “My own name is on it from 1969, with the Insurance Institute. We had a packed team that year, Liam Higgins happened to be working with Pat Foley at the time and Jimmy Bowen was working on his own in the insurance industry so we had two full internationals on the team.” Ted went on to give everyone a little bit of background on the man behind the trophy, William Dwyer – or Billy as he was more popularly known. “Billy was my grandfather’s brother and he founded Sunbeam in 1928” recalled Ted. “He married a lady called Agnes Hardy, and Agnes won the Irish Ladies Close here in Cork Golf Club in 1928, the same year that Billy founded Sunbeam. He had left our own family company in Washington Street as he wanted to move into knitwear and the powers that be wouldn’t allow that, so he left and founded Sunbeam. He started in the Butter Market off Shandon Street and moved to Blackpool sometime after that. At one stage the Sunbeam Woolsey company had around 3,500 employees. He did some great work, he was a big employer and at that stage he had a doctor and a dentist employed in Sunbeam and he also had a sport facility for the employees in Tivoli. He was also involved in Cork Golf Club and he did one big thing of note. My father was Captain here in 1945 and the club house was burned down that year. The club had no money and Billy got his employees in Sunbeam to rebuild the clubhouse. 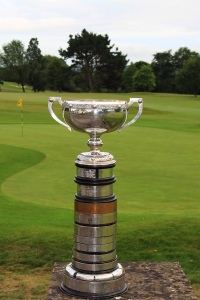 The tournament was again run by Finbarr O’Callaghan and Paddy Brazil, Finbarr has ensured the enduring legacy of the famous competition for over twenty years, and assisted by Paddy Brazil for the best part of a decade. Finbarr took the opportunity to thank everyone for their help in staging another successful competition: I’d like to thank Cork Golf Club for hosting the 75th final and I’d like to thank Mahon Golf Course for providing the venue for the qualifiers. Thanks also to the twenty societies who entered this year and the society secretaries and captains for their help in organising the event this year.” After the a few lean years over the past decade, the inter society competition is now firmly back on track. Reducing the number from five pairs to four pairs has helped to rebuild the number of entrants and it’s hoped that 2018 will see a further increase in the number of societies taking part. It’s one of very few inter-society competitions, and it’s the only one that can trace its provenance all the way back to year in which it was founded. Strokeplay qualifiers take place in Mahon Golf Course every May with the final generally taking place in early July. Golf societies have seen a resurgence in the last year or two, with many societies now electing to play fewer events with a greater variety of courses being used to entice casual golfers to play.