Cian McNamara and James Sugrue have a solid chance of making the Dubai Duty Free Irish Open after the opening round of the Rosapenna qualifier. McNamara shot a three under par round of 69 to lie in 4th place at the halfway stage.  After a bogey on the 5th he came back in four under par, with a final birdie on the 17th to get himself back into contention.  James Sugrue is two shots back on -1, and currently in 10th place.  Sugrue had an interesting round, made up of seven birdies and six bodies.  irrespective of what happens tomorrow both golfers will travel to the UK from Donegal to take part in final qualifying for the British Open.

Jack Howard is tied for 15th on +1, Davey Barry and Padraig Dooley are both tied for 25th place after rounds of 75 (+3).  Given that the best scores today were -5 it’s unlikely that they will advance to Ballyliffin next week.  Peter O’Keeffe retired after the opening round today.  The lead is currently shared between Colm Moriarty and Neil O’Briain on -5, with Simon Thornton one shot back.  David Higgins shares fourth place with McNamara. 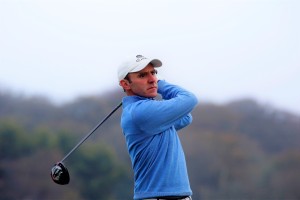 “The course is tricky, there is no doubt about it,” said Colm Moriarty who was delighted with his start.  “It’s breezy and it’s hard to get the ball close to the hole. You have to get it on the fairway first of all but then you have to control your second shots into the greens because they are pretty firm with the spell of weather we’ve been having.”

The morning starters definitely had the best of the going on Saturday and that was reflected in the scoring with eight of the top 10 teeing off before 9am.   The four leading players after the conclusion of play on Sunday will each earn a place in the Dubai Duty Free Irish Open at Ballyliffin with the winner collecting a first prize of €6000.  In the event of a tie for first place there will be a play-off and if required, there will also be a play-off to decide on fourth place.  The leaders will get underway at approximately 1.30pm.