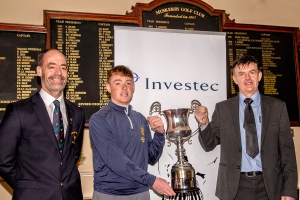 Muskerry Captain Diarmuid Linehan pictured with the holder Fionn Hickey and Michael O’Connor from Investec at the launch of the Muskerry Senior Scratch Cup.

Excitement is building for the first major golf competition for 2019, the Muskerry Senior Scratch Cup on Saturday.  With new sponsors Investec on board, the club put renewed effort into the famous event.  They reaped the rewards with a strong field of entries which includes two Irish internationals and several Munster interprovincial players.  Peter O’Keeffe and James Sugrue lead the field in terms of handicaps, both golfers are past winners, Sugrue won in 2016 while O’Keeffe’s win came ten years earlier in 2006 will be looking to add to his growing haul of titles.  Both golfers have been busy in the off-season.  Sugrue was at the Irish training camp in South Africa which incorporated two top level international events, while O’Keeffe made an appearance at an Alps tour event and has been focused on practice in the recent weeks.

Munster golfers Gary O’Flaherty, Cathal Butler and Andrew McCormack were among the early entries and there is currently a standby list in place as over 80 golfers have entered the event.  The original limit of 66 players has been moved to 69 to accommodate an extra group.  Defending champion Fionn Hickey will be hoping to hold onto the trophy for another while, the teenager became the first home winner for a few years when he climbed the leaderboard in the closing holes to claim the win last year.  “I was overjoyed to win my first senior event particularly with the field of experienced golfers” said Fionn who was capped by Munster at Boys level.  “I knew I was behind with a few holes to go and had to go for everything and lucky for me it worked out.  I was also fortunate to be playing with the leaders from the first round.”  Hickey, who is still only 16 was delighted to win on his home course.  It wasn’t his first win however, he already has a Munster Jimmy Bruen title and a Munster Fred Daly title, as well as being the Munster Under 15 winner in 2017.  “Since joining Muskerry at 11 everyone has been very good to me and have helped me in so many ways.   It was fantastic to get the win so young also and great to see Martin, Fred and Peter Fenlon who have helped me so much so happy for me.  It was great to see so many people at the 18th when I finished.”  The former Munster Boys U15 Champion reckons he has a a fighting chance to retain his title.  “My form isn’t too bad at the moment, I feel my game is in better shape than last year and it will need to be considering the strong field assembling for Saturday.”  There are two more scratch cups on the following weekend.  East Cork will hold their 50th anniversary Senior Scratch Cup on Saturday 6th.  The 18 hole event is sponsored by McGuirks and it’s just €20 to enter with a shotgun start at 2pm.  On Sunday 7th, Fota Island will host their scratch cup on the Championship Deerpark course.  The course in Fota is reported to be at it’s usual excellent standard and entry for the event is €45 per person.  Fota Island are also running weekly open singles every Wednesday.  The entry fee for the spring open singles is €40 per person.  Fota also have a number of offers on lessons and junior membership and more information is available on the website.

Entries are now open for the Ford Junior Scratch Trophy in Muskerry, and the two qualifiers take place on Friday 5th and Saturday 6th April.  The top 64 golfers from the qualifiers will go through to the matchplay stage.  But with well over 200 golfers expected to take part in the qualifiers getting though will be an achievement in itself.  It’s Cork’s most demanding golf event, and unique in that it offers handicap golfers an option to play in a combined Strokeplay/matchplay event.  Once the matchplay starts the 64 golfers will aim to make it through six rounds of golf in three days.  The eventual winner will become the Ford Muskerry Junior Scratch Trophy champion.  Bookings for Friday and Saturday have reached well over 100 already but there are times still available on both days.