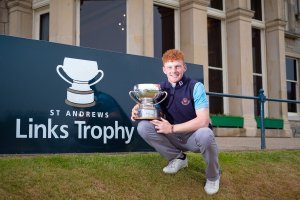 It’s almost twelve months on from where it all kicked off.  The St Andrew’s Links Trophy 2018 was when John Murphy had his first major win, and the Kinsale man has kicked on with a great season with University of Louisville in NCAA Division One college.  Today he kicks on with his first appearance at the Brabazon Trophy, the English Strokeplay championship.  From there it’s onto St Andrew’s to defend his Links trophy, and from there it will be a mixture of Irish, English and European events as the seasons builds towards August.  Murphy has the added benefit of being named in the extended Walker Cup panel, and although he missed out on a few early season events in England, he’s now on the right side of the Atlantic for the selectors to see what he can do.  Twelve months ago it’s was a sudden death play-off that decided the winner of the St Andrews Links.  Given Murphy’s experience in matchplay situations going back to when he was under 15 it was no surprise that he won on the 19th on the Old Course.  A few good performances in the Irish Championships this year will no doubt help his case for the Walker Cup team.

It’s been a season of numbers for John Murphy.  He played in all 38 rounds that UofL were involved with, finishing the regular season with a stroke average of 71.79.  That was three shots better than the previous year, highlighting the improvement in his game.  Murphy finished the 25 under par rounds and racked up four top ten finishes.  He shot 65 twice during the season and his lowest 54 hole score was -15 in Hawaii last October.  Such is the nature of elite amateur calendar, instead of taking a week or two off after a busy college season, Murphy bypassed Cork and went straight from the US to Leeds for the Brabazon Trophy which starts today.  There was no time to get back to Kinsale to see family and friends, but straight into it was onto the first tournament on this side of the Atlantic.  After an impressive year in Kentucky, Murphy is ready to push on again and make an impact at home this summer.  Now inside the top 200 in the world rankings, John is looking forward to three months at home.  Results last summer and a solid college season has meant that John is now happier and more confident going into the summer.  “I honestly can’t really remember the mindset I was in last year” said John.  “From what I remember, I was quite worried and frustrated when I was coming back that wasn’t getting results. I just tried to stay patient last year and it worked.  Golf can be a tough and lonely game after a bad day, so I’m making it a priority to stay patient and keep reminding myself that no matter what happens, the best is yet to come.”

There’s an element of maturity about Murphy’s approach to 2019.  With many milestones achieved last year, he has another set of goals in place for the next 12 weeks.  As a Walker Cup panelist, he won’t have too many breaks so it’s going to be a intense time.  I certainly am going to remain patient this year” added John.  “It’s essential for many reasons, and I don’t want to let how I play this summer determine my mood off the course. This is a mentality that has worked for me in the past.  I also don’t get to see my friends and family a whole lot, so getting to see them and just hanging around Kinsale is already putting me in a positive frame of mind.  Golf is a fickle game and anything can happen, and it’s important that you realise that if you’re to play golf competitively, otherwise it will drive you crazy.  I’m confident that I have put in some really good work while I was in America.  I had a group chat with Ian Stafford and Paul Kiely where we worked on my swing together, and I feel like my swing is where I want it to be, so now I am hoping that the work I put in will pay off sooner rather than later.”

“I had a blast competing the last few months, but it was a bit of a rollercoaster” added John.  “If there’s anything I learned, it’s that golf can bite you when you think you have it sorted.  This semester I can recall many occasions where I was full of confidence and felt like I could never hit a bad shot.  All of a sudden, one bad break or one missed putt and everything changes.  That’s just the nature of the game and it happens everybody.  It’s the people who let it get the best of them that don’t end up playing the game very long, so I just keep reminding myself that the lows are worth the highs.”

Although he was in the US for the past nine months, John was in constant contact with his coaches in Cork, Paul Kiely and Ian Stafford.  Ian, who is based in Kinsale and Lee Valley has kept a close eye on the progress of his high performing student, watching the analytics and data points.  “One of the biggest reasons for John’s improved stroke average is his improved performance on Par fives which is one of the areas we highlighted as an area that he needed to improve” explained Ian who has led John’s coaching team for over ten years.  “John now has a much better knowledge of how to handle different grass types especially Bermuda Greens which they play quite a bit in their conference championships and also got some valuable experience playing the sandbelt courses in Melbourne over the Christmas period.  So as well as having much improved performances John has banked a lot of knowledge for his future years.”  With Murphy playing what is effectively a wrap around season, he’ll have a different challenge over the next three months. 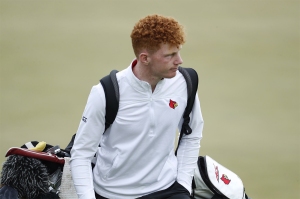 “I know John is really looking forward to getting home and playing the type of golf that is played over here and playing some of the biggest amateur events this side of the Atlantic,” said Stafford who has worked with John for over ten years.  “Being able to play the Amateur Championship in Ireland in the middle of June and defending the St Andrews Trophy are probably the highlights.”  While Stafford has watched Murphy progress over the last five years, he believes that the journey is far from complete  “John is returning to us a much improved player, stronger and fitter, the guy is good, very good but the scary thing about John is that there are definite areas where he can improve to make him even better.  He knows what they are, his coaching team knows what they are, and he is determined to get better every single day.”