Mallow Golf Club have just announced details of their Senior Scratch Cup, the first time the competition will be held since 2012.  The 36 hole event will take place on Sunday 25th August, and uniquely it will feature a redraw at the end of round one to pair the leading players for the second round.  Already many of the top golfers in Cork and Munster have committed to the event which is limited to 72 golfers.  It’s another chance for Cork’s top golfers to claim some silverware as the opportunities to claim a scratch cup win are narrowing.  The season started with the Muskerry Senior Scratch Cup back in April.  That event was won by Peter O’Keeffe in a strong field of entrants, and the signs are that there will be another strong field in place in Mallow.  The organising team of Conor Dowling, Brian Attridge, Neil Gallagher and Sean O’Shea have a great prize fund in place, thanks in part to the sponsorship from Hegarty Building and Civil Engineering.  Fist prize is the maximum €575 with second taking €325 and a generous €250 for third place.  There are also nett categories and prizes for each 18, bringing the prize fund total to well over €2,000.  The trophy is a piece of Cork golf history, holding the names of many of the top golfers from the 80’s and 90’s.  Tom Cleary and Peter Cowley were winners in both decades while Denis O’Sullivan and Pat Lyons won in the 90’s. 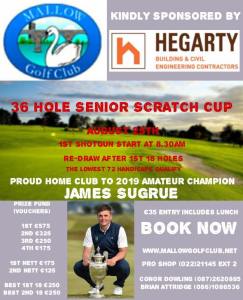 Many refer to that period as the golden age of scratch cups in Cork, and one which was dominated by a group of Cork Golf Club members who travelled the province for top level competitions.  Tim O’Mahony, David Finn and Ian Spillane were among the winners since 2000, with Spillane winning in 2012 when the competition was last held.  Mallow’s own James Sugrue will lead the field, but there will be a strong challenge from many of Cork’s top golfers.

Mallow are also holding a large development classic at the end of this month.  The competition takes place over three days from Thursday 29th to Saturday 31st August and the main sponsor is Pat Shine.  The format is a three person team event and the cost is €120 per team which includes a meal.  There are an amazing line up of prizes.  Tee boxes and greens can also be sponsored of €30 each.  Bookings can be made online or by calling the club on 022 21145.