Young Douglas golfer Jack Murphy might be just 13 years old, but he made a big impression in Ballybunion today when he won the famous Kerry Boys Championship.  And it was a double success for Cork as Daniel O’Sullivan won the Plate Final.

Murphy added his name to a list of high profile winners after a excellent display of golf this afternoon.  He was up against Lee Valley’s Keelan McCarthy in an all-Cork final, and despite being 5 years younger, the Douglas golfer came out on top.  He got off to a flying start this afternoon, he was three up after six holes on the challenging Cashen course.  By the turn he added another to go five up, and he closed out the match on the 14th after winning 5&4.  It was a great week for Murphy, he opened with a 77/82 in the strokeplay qualifier to make the top flight championship draw with a few shots to spare.  In the first round match he beat Bandon’s David Kelly, and yesterday afternoon he beat Paul Costello from Galway to reach the semi-final. 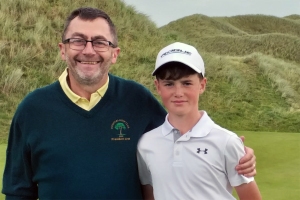 This morning he beat David Marshall from Naas to book a place in the final.  This was the youngsters second Kerry Boys, last year he made the plate draw losing out in the second round.  On the other side of the draw, Keelan McCarthy made similar progress, beating James O’Callaghan, Robbie Walsh and Jamie Butler to make it through to final.  There was a strong Cork presence in Ballybunion this week.  Fionn  Hickey and Mel Deasy also made the matchplay in addition to Kelly and Walsh.