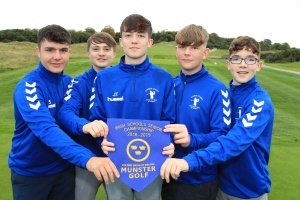 The Bishopstown students were up against St Josephs Ballybunion and this too was a tight match.  Robbie Walsh and Jack Lucey put points on the board for the Cork side but James Walsh, Ben O’Connor and Eoghan Hallihan all lost out in the later stages of their games to see St Joesph’s advance.  Although the final was scheduled to take place in the afternoon the forecasted rain came early with lasted through the morning and early afternoon.  Unfortunately for all of the golfers, the rain persisted and a heavy downpour around lunchtime made the course unplayable.  Colaiste Choilm and St Joesph’s will now have to wait until the rescheduled date for the final is announced by Munster Golf.  The weather also had an impact on the Schools Junior Championship.  In fairness to the younger golfers, they all stayed out on the course and tried to finish their Strokeplay rounds, but the heavy rain resulted in flooded greens meaning that play had to be abandoned.  There were two Cork colleges in action, St Francis College Rochestown and St Colmans College Fermoy, with St Flanans from Ennis and Abbey Community School from Waterford also involved.