David Ryan (Cahir Park) is the leading Cork professional after round one of the Connemara Pro-Am today.  Ryan was one of three Cork golfers to shoot under par, he recorded -2 for his round to lie in second place behind Neil O’Briain (Old Conna) on -5. Monkstown duo Cian McNamara and Graeme Dunlea were one shot behind on -1 and in a tie for 5th place.  Fernhill’s Wayne O’Callaghan shot a level par round for a share of 12th place and he too is in with a shot going into tomorrow’s final round.

Ryan had an uneventful front nine, in fact he carded 10 consecutive pars before he birdied the 11th.  He added birdies on the 14th and the 17th but he END_OF_DOCUMENT_TOKEN_TO_BE_REPLACED 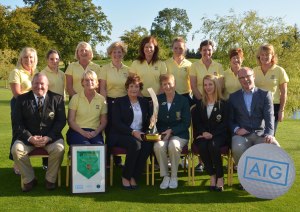 Teenager Rachel Rea set the tone for the champions with a comprehensive 8&7 victory in the back match. Suzanne Hickey was almost as convincing during her 4&3 win against Niamh Strudwick and Rachel Sheehan took the top match 3&2 in what was a superb team performance.

“I can’t say enough to praise them, they were absolutely awesome,” said team captain Frances O’Brien, who was thrilled with her side’s success. “They were a very good opposition. Our girls really had to be at the top of their game to beat them today.”

Champions two years ago, this was a new team for East Cork and 17-year-old Rea had to take time out from her final year of secondary school to be in Knightsbrook this week.  “Rachel’s after taking time out from her Leaving Cert, her mother gave her permission,” O’Brien revealed. “I think for us it seemed as if it went right to the wire because you’re not in until you’re in. it was just magnificent. East Cork keeps producing players and it’s a very competitive club.”  O’Brien and her team headed home to Midleton in high spirits after another memorable success. 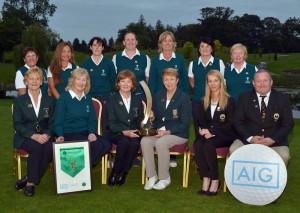 Wearing spikes rather than studs, former Irish rugby international Laura Guest found success all the same as she guided Lee Valley to All-Ireland glory.  Guest retired from international rugby last year after a 14-year career in the Irish jersey but she was celebrating another famous victory on Friday night.  A Grand Slam winner with the Irish ladies in 2013, Guest got her hands on an All-Ireland medal in the AIG Intermediate Cup Final at Knightsbrook when Lee Valley beat Malahide in the final at Knightsbrook.  “It’s a bit different here,” said Guest. “I absolutely love the golf.  I’m just lucky that we were here and lucky that we played well. It’s only really this last year that I’ve spent a bit of time playing, I never really had time before.”  Helen Hodson and Catherine O’Sullivan had won their matches comfortably, leaving Lee Valley just one point from overall victory.  Guest had the title in her hands and when she completed a 3&1 victory on the 17th the cup was going back to Cork.  “I couldn’t look at anybody there the last three holes, I just needed to stay focused,” said Guest, who had played in three World Cups with Ireland during her rugby career. END_OF_DOCUMENT_TOKEN_TO_BE_REPLACED 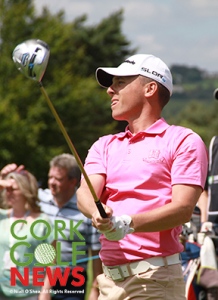 Cian McNamara was the joint winner of today’s Oughterard Pro-Am in Galway.  The Monkstown Head Professional carded a one under par total which included four birdies and three birdies.

McNamara, starting his round at the first, dropped a shot at the second but hit back with back to back birdies at the fifth and sixth before dropping his second shot of the day at the par three ninth.  Out in level par 35, the 28-year-old birdied the 11th and 15th on the back nine but a dropped shot at the 12th saw him home in one under 34.  Donal Gleeson (Old Conna Golf Club) also posted – to tie McNamara for the top spot.  Castlemartyr’s  Alan Gleeson and Monkstown’s Graeme Dunlea were part of a nine way for 11th place.  The Castlemartyr Assistant led his team to the amateur prize with a score of 94 points.

It’s McNamara’s second win on the Irish Region Tour this year and he’ll be hoping for another good round tomorrow as he’s in action in Connemara.  McNamara is the holder having won in 2014 and must be fancied for the 36 hole event. 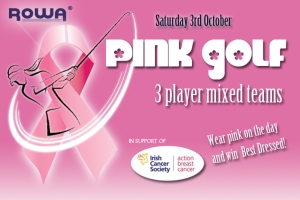 Open to mixed teams of 3 players, either 2 men and 1 lady or 2 ladies and 1 man, the Rowa Pink Golf Charity Classic will encourage all golfers to think pink, all for a great cause. Entry is open to members and their guests or visitors for just €15 per person.

Ger Halligan won the Oakley Open Singles Series final in Lee Valley yesterday and bagged a trip to the Portugal Masters next month. 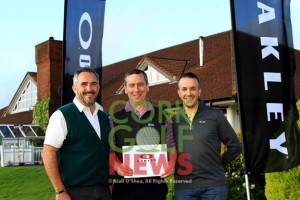 Halligan, playing off 14 in Lee Valley, returned 38 points on a day when golfers were hampered by tough winds and heavy showers despite the course being in great condition.  Ger won flights and accommodation for the Portugal Masters which is taking place in mid October.  As well as passes for the European Tour event, Ger will also have access to the players areas on Wednesday.  Oakley are one of the tournament sponsors for the prestigious tour event.  Ken Buckley (Lee Valley) was second and won a customised Edel putter, the Oakley customised putter is one of just 20 that were hand crafted and modified for Oakley worldwide.  Mahon’s Colin Hussey was third and won a top of the range pair of Oakley sunglasses.  Sean Horgan (Muskerry) was fourth and won an Oakley golf bag.  All finalists received Oakley and END_OF_DOCUMENT_TOKEN_TO_BE_REPLACED

Alan Gleeson (Castlemartyr) and Davey Barry (Douglas) both finished in the top 10 in the Irish PGA Championship qualifier at Dundalk Golf Club today.

Barry finished in the top four with a level par 72, while Gleeson was one shot back in a tie for 10th.  Both travelled to Dundalk today in the hope of taking one of the qualifying spots on offer but both Cork golfers must now be delighted with their performances.

The Irish PGA Championship takes place in Dundalk Golf Club from Thursday 1st October to Sunday 4th Cotober and is the showpiece finale for the Irish Region Calendar.  Several other Cork PGA Professionals have already qualified for the event including David Ryan, Graeme Dunlea and Padraig Dooley. 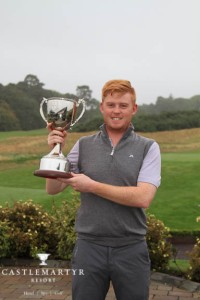 Waterford’s Eanna Griffin shot two under par rounds to win the Castlemartyr Senior Scratch Cup on Sunday.  The Waterford golfer has come close to winning a few times this year, he was runner up at the West of Ireland and led the Munster Strokeplay at the halfway stage, but his first win of 2015 finally came on Sunday.  Griffin was the only golfer to break 70 in the opening round, his 96 had him two shots clear of the Cork GC duo of John Hickey and Paul Tobin.  END_OF_DOCUMENT_TOKEN_TO_BE_REPLACED 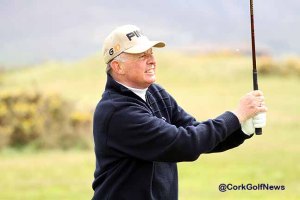 Cork’s Tom Cleary recorded his second win in three days as Ireland beat Wales in the Senior Mens Home Internationals today.  Cleary was a member of Sean O’Leary’s team, and was competing in his second competition in just over two weeks for the Irish Seniors team.

The competition was held in Crowborough Beacon GC in East Sussex.  Ireland lost to England on day one but followed that with impressive wins over Scotland and Wales.  Although Ireland topped the three way tie with the greatest number of match wins, Scotland retain the title as holders..  The rain affected competition saw the foursomes cancelled on the first two days and Ireland’s triumphed today with 7-3 win when all ten matches were played.