Open Week at Fota Island Golf Academy is just around the corner, beginning the 3rd of April and running until the 7th of April at its golf resort in Cork.

Fota Island Golf Academy will open its doors to keen golfers for the week between 10am and 6pm allowing guests to experience the finest and most comprehensive golf training facilities in the country as well as allowing guests the opportunity to hit some balls and play the Barryscourt 9.

Ideal for those who want to improve their game, the Fota Island Golf Academy offers a sophisticated analysis of swing, putt and technique, as well as excellent, comfortable and relaxing surroundings and invaluable advice from professional trainers along with expert tuition. The finest selection END_OF_DOCUMENT_TOKEN_TO_BE_REPLACED

David Ryan and David Higgins came out on top on a glorious day in Monkstown today as the annual Morgan O’Donovan Perpetual Trophy competition took place.  Both players shot an impressive 67 and although the sun was out the combination of  a hard wind blowing and fast greens meant that only a few golfers managed to break par.  The competition is now in it’s fifth year and commemorates Morgan O’Donovan who was Head Professional in Monkstown before his death in 2012. The competition today was sponsored by Ping and the pro-am format saw plenty of Munster PGA Professionals take the opportunity to get out and play with an amateur partner.

It was Higgins third time in a row to win the prestigious tournament.  Higgins had missed out on the opening events, playing his first event in Cork a few weeks ago where he shot a 73.  The former European Tour player shook off the cobwebs as he went out in a very tidy 32 strokes.  Birdies on the 4th & 5th were followed by a birdie on the 9th hole to turn on -3.  Another birdie followed on the 11th but he handed back a shot on the par three 13th.  He birdied the 15th to get back to -4, but there was one more bogey on the 18th where a tricky pin position was causing trouble for a good number of golfers.

David Ryan followed up his current good form with another 67.  He went END_OF_DOCUMENT_TOKEN_TO_BE_REPLACED 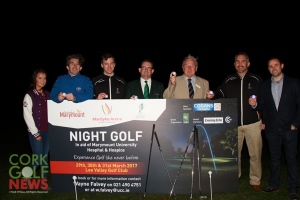 This week will see three evenings of night golf in Lee Valley.  The event will mark the first time that Lee Valley will be lit up for a unique golfing experience.   The ten-hole event will take place in darkness, with coloured lights marking the fairways, greens and hazards, and with a luminous golf ball in play, golfers will have no excuse for not keeping it in play.  The team of four event takes place from Wednesday 29th to Friday 31st March, the shotgun format will see the 20 teams start at 8pm with prizes and refreshments included on each night.

Thursday is fully booked but there is some availability on Wednesday and Friday.  This is first time that Night Golf will be held in Munster and the END_OF_DOCUMENT_TOKEN_TO_BE_REPLACED

The closing date for entries for the Munster Strokeplay Championshipis just a week away so it’s a timely reminder for anyone who wants to compete in Cork’s premier 72 hole tournament.  Cork Golf Club will again host the event, with the winner receiving the historic Cork Scratch Cup, the oldest scratch cup in the country.

Holder Cathal Butler (Kinsale) won the event last year after an exciting play-off win over Cork’s Gary O’Flaherty.  Butler has already entered, as has Kinsale’s John Murphy who won the Munster Student’s Championship in Cork GC this week.  This year the Munster Strokeplay is a counting event for the GUI Order of Merit (Willie Gill Award) and that should be an added incentive for golfers to travel to Cork for the May Bank Holiday weekend.  The event has been a WAGR counting event for several years, and it also counts towards the Munster Senior Order of Merit.  Last year there were over 50 golfers playing off scratch or better, and the indications are that a similar standard will be seen when the event gets underway on Saturday 29th April.  Peter O’Keeffe (+2.9), Ian O’Rourke (+2.6), Mark Power (+2.5) and James Sugrue (+2) head the entrants at present.  A total of 78 golfer will compete in the opening 36 holes, with the top 39 (plus ties) going forward for the second 36 holes on Sunday 30th April.

The golf season is finally getting underway and last week Lee Valley launched their showpiece Senior Scratch Cup which takes place next month.  The 54 hole tournament is the only club event in Cork that attracts WAGR world ranking points and should again attract some of Ireland’s top amateurs.  The competition takes place on the 22/23 April and just a week after the West of Ireland unofficially opens the 2017 season.  Tournament Director Vincent Drinan has been involved since the inaugural 54 hole event in 2009 and he’s already busy taking entries.  “We are really looking forward to another great event this year” said Drinan.  “Entries are now open and anyone interested in playing should contact me directly.  Last year we used a later date in April and this worked very well, and the course should be in excellent condition for the event.  The feedback has always been positive from the entrants, both from local golfers who play here regularly and from those who travel.  We already have a number of END_OF_DOCUMENT_TOKEN_TO_BE_REPLACED

John Murphy claimed the inaugural Munster Students title in Cork Golf Club today, the Kinsale golfer won on the result at 36 holes after play was cancelled on the final day.  Snow and heavy rain rendered the course unplayable and after consulting with course staff, Tournament Director Dave Prendergast had no option but to cancel the final round with the results from 36 holes declared.  Murphy finished on a total of 138 (-6) for the 36 holes, four shots clear of James McVicker (Knock) who took second place.  Third place went to Cathal Butler (Kinsale), and holder Jack McDonnell (Forrest Little) was fourth, both golfers also finished on -2.

It was Murphy’s second Munster title, the Irish Boys international won the Munster Boys title in 2016.  “It feels good, it’s a great start to the year” said Murphy.  “It’s a long season so it’s a confidence boost to get an early win.  Monday was a little disappointing, especially on the back nine.  Yesterday I was happy to be on -4 through 10 as I wasn’t playing my best.  I missed a few chances on the way in yesterday, I hit a poor tee shot on 16th but scrambled a par which kept me on track.”  His 68 in the second round tied for the lowest score on the day, keeping him ahead of the field.  Murphy has a busy few weeks ahead as the season gets into full swing: “I’m playing in St Andrew’s next week for the Bursar’s Tournament and then I’m playing in London in the Berkhamsted Trophy.  After that I’m END_OF_DOCUMENT_TOKEN_TO_BE_REPLACED

John Murphy stormed to the top of the leaderboard on day 2 of the Munster Students Championship, thanks to an excellent 68.  He’s now four shots clear of the field on 6 under par.  68 was a popular number in Cork Golf Club today, with both James McKeever and Cathal Butler posting 68’s.  Butler will disappointed despite tying the low round of the day, he was seven under before carding a triple bogey on the 17th.  The Kinsale man dusted himself off and recovered with a par on the 18th.  Butler recorded six birdies and an eagle, with one bogey and the triple in the impressive round.

Murphy’s 68 was less dramatic four birdies and a bogey on the front nine saw him on -3 at the turn.  He added a birdie on the 10th and shot par golf for the remaining eight holes.  The four hole cushion gives him a big advantage going into the final round, but there are some quality golfers in the chasing pack.  Monkstown’s Sean Desmond is tied for 5th on level par and James Sugrue is just inside the top END_OF_DOCUMENT_TOKEN_TO_BE_REPLACED 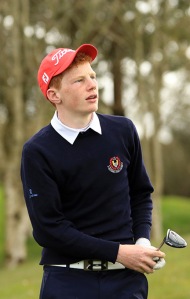 John Murphy (Kinsale/MU) lies just one shot off the lead after day one in the Munster Students Championship at Cork Golf Club.  The Munster Boys champion finished on two under after carding four birdies and two bogies.  The lead is held by Stefan Greenberg (Tandragee) and David Foy (Laytown & Bettystown)on three under, while holder Jack McDonnell (Forrest Little/MU) is just one shot off the lead.

Sean Desmond (Monkstown/UCC) is in the top ten after signing for a one over par 73.  Desmond won a Munster Senior Cup title with Monkstown in Cork last August and the course clearly suits him.  The UCC student was four under through six holes but he dropped two shots before the turn.He had a mixed start to the back nine and a double bogey 15th meant that he signed for a 73.  Kinsale’s Cathal Butler is one shot back and also in the top ten.  He eagled the par five second END_OF_DOCUMENT_TOKEN_TO_BE_REPLACED