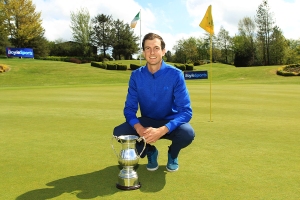 It was a weekend that started with Storm Hannah, but it finished with Storm Tiarnan as the Massereene golfer put manners on both the course and the field at the Boylesports Lee Valley Scratch Cup.  It was a wire to wire win for the Antrim golfer, after an opening 73 which put him in the lead, he set a course record on Saturday afternoon with a six under par 66.  Going into the final round he had a four shot lead, that meant he just needed to keep pace with second placed Ronan Mullarney.  The Irish International went on the attack again though and closed with a three under par 69 to extend his lead and win by a clear margin of seven strokes.  The 16th hole summed up the weekend for McLarnon, after missing the green he chipped in for birdie.  That effectively sealed his win, and after two regulation pars on 17 and 18 he smiled to crowd to acknowledge his first win in Lee Valley.  While Tiarnan led from the front, the chasers didn’t END_OF_DOCUMENT_TOKEN_TO_BE_REPLACED

Pictures from the third round in Lee Valley: END_OF_DOCUMENT_TOKEN_TO_BE_REPLACED

Tiaran McLarnon shot a course record 66 (-6) in Lee Valley this afternoon to take a four stroke lead heading into the final round of the Boylesports sponsored Senior Scratch Cup. The Massereene golfer tied the lead after the opening round when he and Kinsale teenager Robbie Walsh shot a pair of 73’s in difficult conditions.  McLarnon doubled down this afternoon and an eagle on the par four 1st hole helped him to take a firm hand on the 54 hole event, he’s on -5 (139) going into the final round.  McLarnon, who finished as runner up last year, is now six under for his last five rounds in Lee Valley – 66-73-70-74-71!

Kieran McCarthy was a bit cross after the opening round.  After a good drive on the 17th he failed to find his ball END_OF_DOCUMENT_TOKEN_TO_BE_REPLACED

The wind is blowing but with the storm due to pass early tomorrow morning, the stage is now set for a great weekend in Lee Valley.  “It’s all systems go” was the word from Tournament Director Vincent Drinan this afternoon as the final preparations were made for the Boylesports Lee Valley Senior Scratch Cup.  Many of the visiting golfers traveled to Cork today with a large number playing a few holes in preparation for tomorrow.

There were a few changes to the timesheet, but confirmation from both Mark Power and James Sugrue that they were both still coming after being called up to the Walker Cup training squad next week added to the event. 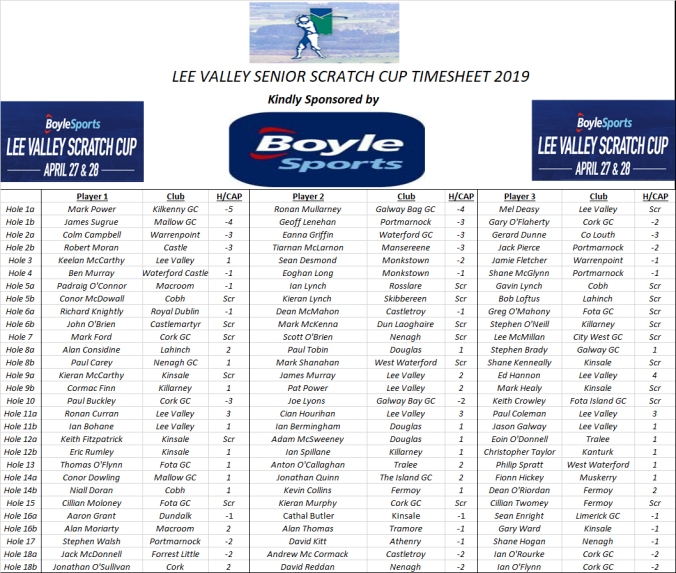 The first round gets END_OF_DOCUMENT_TOKEN_TO_BE_REPLACED

Fionn Hickey finished strongly in Donegal today to claim second place in the Ulster Boys Open Championship.  After opening rounds of 72 & 73 the Muskerry man was -1 and held 4th place overnight.  In tough scoring conditions, Hickey found himself four over after six holes, but two birdies steadied the score.   A final bogey on the 16th would see him sign for a 76, but that ended being the third best score of the day with nobody able to break par.  Dundalk’s Josh Macklin shot a 74 to win while overnight leader Joshua Hill finished fourth.  Robert Walsh(Kinsale) finished tied for 17th while Jack Egan (Muskerry) and Keelan McCarthy (Lee Valley) were further down the field. 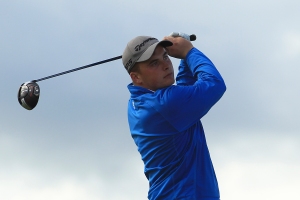 James Sugrue in action in the South of Ireland last year

James Sugrue and John Murphy were today named on a 26 man extended panel for the Walker Cup, and both will be hoping for a good summer of golf to boost their chances of making the ten man team for September.  The Walker Cup takes place in Royal Liverpool (Hoylake) later this year, and both will hope to follow in the footsteps of John McHenry (1987) and Jimmy Bruen (1938/49/51) in making the final team.  Mallow’s Sugrue (22) was disappointed two weeks ago when he had to withdraw from the European Nations Cup due to injury.  Now he’s back at full strength he’ll be looking forward to the squad practice in Hoylake next week prior to playing in the Lytham Trophy the following weekend.  Kinsale’s John Murphy (20) is currently in Kentucky with END_OF_DOCUMENT_TOKEN_TO_BE_REPLACED 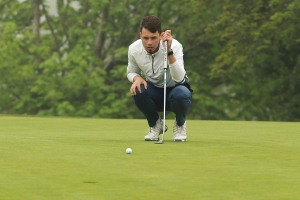 It started with over 300 golfers, but by 5pm this afternoon there was just one left.  David Howard added his name to a famous list of winners at the 50th staging of the famous Ford Junior Scratch Trophy.  And in a funny quirk of the draw, the Fota Island golfer beat his dad John in a tight final to win the six round matchplay event.  It was a strange setting, having the father and son paired against each other, but some high quality golf from both made for a competitive final, with David coming out on top.  The teenager went up a few times in the match only to be pegged back by his Dad.  The back nine was decisive with David winning the 13th and 16th to go two up.  On the testing 17th, David found the green with a drive an nine iron, and when John couldn’t make birdie the match was over with David coming out on top.   Needless to say the 19 year old was delighted with the win. “I’m very happy to win this scratch cup which has such a big name to it, it’s a END_OF_DOCUMENT_TOKEN_TO_BE_REPLACED