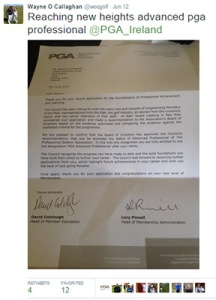 As a PGA professional for over 15 years, Wayne has consistently worked on his own personal development and was recently awarded the PGA Advanced Professional designation by the PGA in UK & Ireland.  The designation which was awarded by the Board of the PGA, is recognition of the additional learning and development that Wayne has engaged in throughout his career.  Additionally he is one of only a few coaches to have achieved Level 3 status for junior golf with the Titleist Performance Institute.  “I applied for advanced status a few months ago as I felt I met the criteria.  A few years ago our PGA representative Peadar McParland urged me to apply but I felt I needed to do more, so I focused on educating myself through PGA CPD courses the TPI (Titleist Performance Institute) courses, and setting up the Irish Junior Masters Golf Tour to try and grow the game. I was delighted that this was recognised by the panel and approved by the board of directors.  I will continue my journey of learning and developing my career but it’s a great boost to get the new designation.”  Wayne has worked hard and invested in his career, his original mentors as a trainee were Dublin’s Roger Yates and Bandon’s Paddy O’Boyle.  After qualifying as a pro, Wayne continued to study and learn to continually develop and improve his teaching and playing skills.  Over the years he has met many great teachers but insists that the Titleist Performance Institute is one of the most important.  Wayne says: “One of the biggest influences on my career was attending the European golf teaching summit and meeting Greg Rose and Dave Phillips (co-founders of the Titleist Performance Institute) as it opened my eyes to new way of teaching including linking body limitations as possible causes to poor swing mechanics. Having a major interest in junior golf, I became one of the first professionals to become a Level 3 TPI junior coach which included visiting San Diego last year to observe Milo Bryant the TPI’s junior golf director.” 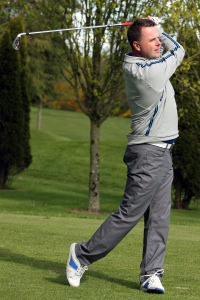 With role models like McIlroy, Harrington and Lowry, many top young amateurs are looking at pro golf as a potential career.  In the past five years there have been a huge increase in the number of amateurs heading off to tour school or on the numerous mini-tours in Europe and further afield.  O’Callaghan has watched this development and is an advocate for the PGA path for any aspiring professionals: “The advice I would have for any aspiring person trying to make it on tour is have a plan B and maybe consider getting a PGA qualification first, but certainly a qualification of some sort because only a few make a good living from the tour.”  As a veteran of the PGA Irish Region, O’Callaghan has witnessed the huge increase in events and prize-money from 2000 to 2010.  But since then the number of sponsors have reduced resulting in much smaller overall purse.  At the same time Wayne’s focus has also changes as his academy grows:  “I still enjoy playing events in the Irish region but the number of events and the prize money has reduced.   I have built up a lot of friendships over the years and in a number of Pro-Ams I have had the same team for years.  I still enjoy some success on the PGA Irish Region tour but I just don’t have the time for hours of practice anymore. My role has switched more to teaching and developing the junior academy, and of course caddying for my son which I really enjoy.”

Part 2: A Chip off the Old Block – Golf success runs in the family for the O’Callaghan’s