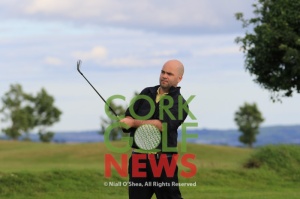 Fermoy’s Brian O’Callaghan topped off a great week yesterday with a win in the Cork Junior Scratch Cup.  On Wednesday evening Brian was involved in a dramatic finish to the AIG Junior Cup area final, he birdied the 19th in Blarney to send his Fermoy team through to the Munster Finals.  The left hander was back in form on Sunday and went around the course in Little Island in a one over par 73.  O’Callaghan finished one shot clear of the field in the Top Golfer Tour event, just ahead of Kinsle’s Mervyn Young.  Cork’s Eddie Cagney took third place with the best of a large number of 75’s.  Monkstown’s Gerry Holland won the nett category with 68, beating Ronan Cullinane by one stroke.  The course in Cork was in great condition for the showpiece event.  It will be a busy few weeks for Cork as they prepare to host the AIG Cups & Shields finals.  The Senior Cup, Junior Cup and Barton Shield will all be held over the weekend of the 13th & 14th August.  O’Callaghan’s win could be an omen, he’ll be part of Fermoy’s Junior Cup panel who take on Tralee in the AIG Junior Cup semi-final.

The next Junior Scratch Cup takes place in Monkstown on Saturday 30th July.  The event has attracted a large number of booking but there are some slots and individual places still available.