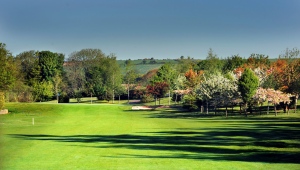 Many golf clubs are starting to wind down their activities now that all the major competitions have been played and weather starts to get a bit cooler.  That’s not yet the case for Kinsale as they have a few more important events on their calendar.  Now celebrating 21 years in Farrangalway, the club still has a busy schedule of events that will run through to the end of next month.  First up is their club classic which takes place on Friday.  Last year they were fundraising for their Purcell and Fred Daly teams who reached Munster finals, and this year the focus is on course improvements as Kinsale Captain Declan O’Flynn explained.  “We had a very successful Club Classic last year as a fundraiser for teams that qualified for Munster Finals of the national competitions” said O’Flynn.  “The format is a three person team event, with an entry fee of €120 per team.  The best score on each hole will count with 3 to count on the 18th.   Some excellent prizes will be up for grabs, sponsored by our long term sponsor of Kinsale, the Gleeson Group.  Other prizes include a fourball from our neighbours at the Old Head, additional fourballs at various Clubs and some vouchers from restaurants in Kinsale.  This year’s focus is on course improvements that are following recommendations from golf course specialists Hawtree.  These course enhancements are designed to provide better definition and improving visual impacts while maintaining a course that is attractive and fair for our “average” club golfer.” 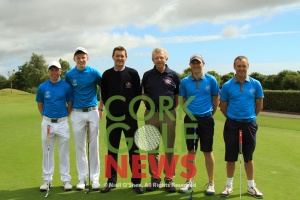 The club classic comes soon after the successful Pro Shop Challenge which took place last week, and the Club Captain was one of the hundred or more fans who came out to watch the event.  “The Pro Shop Challenge was a tremendous success, with terrific golf played.” Said O’Flynn.  “Cathal and John withstood the challenge of Ger and Ian, with 17 birdies amongst the four players.  It was a delight to witness and support this event.  We feel very honoured in Kinsale at this time to have two Munster Champions that have come through our Junior ranks and who took the time to showcase their prowess around Farrangalway in support of a very deserving cause against the very golf teachers that have contributed greatly to their talent development.  Almost €3,000 has been raised to date and you can still support Special Olympics Ireland, with donations accepted at the Pro Shop.”  The novel competition was such a success that the club have planned to make it an annual event.  In fact the novel format generated plenty of discussions and chat at several other clubs in Cork, with several amateurs lining up to take on their pro’s. 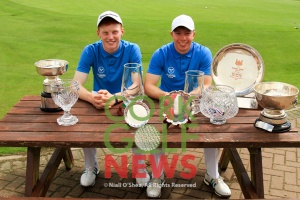 It’s 21 years since the new course in Farrangalway was opened and although Kinsale has the benefit of being in easy reach of great Cork city population base, it also has a huge amount of competition from fifteen other courses, each chasing membership, green fee, society and corporate business.  Like all other clubs across the province and nationally, Kinsale has seen big changes to its membership over the past eight years.  And like many local clubs in 2016, the Captain is reporting a change in that trend now.  “We are in line with national trends in that we have lost around 25% of members (circa.330) since 2007/2008, but I’m glad to say that decline seems to have bottomed out and this year is membership neutral with around 50 leaving and the same number of new members joining.  It’s an amalgam of new members, with some previous members rejoining, some members moving from other local Clubs and some who have moved to live/work in the locality.  Some initiatives are underway, the Ladies Get into Golf programme had over 60 participants and around 30 seeking ongoing membership.”  Kinsale have also developed a very progressive junior golf programme, with an integrated plan designed to support young golfers as they take up the game.  PGA professionals Ger Broderick and Ian Stafford are both central to the programme and the approach from the club and the professionals ensure that all new joiners are supported over the first few months.  The junior programme has served up several top class golfers over a number of years with a large volume of success over the past two years in particular.  Cathal Butler, Gary Ward, Mark Healy and John Murphy all gained provincial selection last year and the Fred Daly team also made it to the Munster final.  Butler and Murphy were hugely successful this year, Butler won three senior scratch cups and Murphy won the Munster Boys and also won the Kerry Boys in Ballybunion for the second successive year.

Declan has witnessed first hand the evolution of the club and can trace his association with Kinsale back to the early 80’s.  “I am a member for 33 years and fondly remember Ringenane prior to the move to Farrangalway in 1995” said O’Flynn.  “The course here has matured and developed over the years and great credit is due over the last few years to Padraig Crowley and his greenkeeping team for the year on year improvements in evidence, and the course is now widely acknowledged as being in great condition year round.  The regular sanding of the fairways, where members contribute €1 per competition entry to a “sand fund” means that the programme can be continued annually.”  O’Flynn has seen lots of change off the course too: “We now take the computerisation of timesheets and handicap adjustments for granted but great credit is due to previous Committees and Club Officers for being early adopters in these enhancements.  Also the demographics have evolved over the years where the Saturday and Sunday afternoons were the prime golfing times but now these are the quietest on the course.  With over 60% of members in the +60 age category the future challenges are self evident.  The investment over the last 6-7 years by the club in Juvenile golf, under the astute leadership of Junior Officer Ger Cullinane, ably assisted by Club Pros Ger and Ian has resulted in an emerging crop of golfers that can challenge for major honours in coming years.  A recent indication of modern trends is where we previously ran a traditional Father/Son competition that lapsed for a few years, this has evolved into a Family event where a combination of Family members took part in a 3 person scramble competition.”  That simple example of a change in format for a competition is another example of the continuing evolution of Kinsale Golf Club, on and off the course.

Like the surrounding area, Kinsale Golf Club has a rich history that goes back over 100 years.  While records show that golf has been played in Kinsale since the 1880’s, the club that exists today was first established in 1912, at a location known as Tissasson on the Bandon river.  Like many clubs of the time Kinsale had a few moves in the early years, and to their credit their final move happened 21 years ago with the opening of Farrangalway.  After a break in golf from 1914-1918, the cub set about rebuilding activities as normal life resumed after the war.  The club moved to Knocknapogaree near Charles Fort in 1922, with its first Clubhouse built in 1926.  Difficulties with landowners saw another move in 1930, this time permanently to Ringenane, overlooking the Belgooly river.  Dedicated club members are reported to have transported the clubhouse, “a one roomed timber and corrugated iron structure, complete with timber veranda” to its new location.  The Club continued in Ringenane for over 50 years, however the large number of members put pressure on the nine-hole course and ambitions for an 18 hole course finally prevailed in the 1990’s.  Unable to acquire adjacent land, a land fund was established in 1983 with a farsighted ambition to purchase new grounds.  In 1993 that opportunity presented itself and was seized.  122 acres of fertile agricultural land at Farrangalway was subsequently transformed to a beautiful 18 hole course in the gentle rolling meadows of Farrangalway in the Bandon river valley.  Two years later on 15th October 1995, the first ball was hit on the new course when Christy O’Connor Snr and local favourite Liam Higgins went head to head as part of the opening celebrations.

The club continued to operate the nine hole Ringenane course for several years, firstly as an additional nine for members, and then as a separate ILGU and GUI affiliated club.  Major changes to the game saw several golf courses and clubs close in Cork over the past ten years and Ringenane closed as a golf course a few years ago.  The work at the new course didn’t stop in 1995, in addition to ongoing maintenance and upgrading, the club purchased additional land to build new holes, practice facilities including a six bay covered driving range were added in over the past few years.  A number of years ago substantial investment took place in the form of planting semi-mature trees in order to build the challenge of playing on the elevated site.  More recently New bunkers have been added to the 7th, 9th and 18th holes.  Further plans for the ongoing evolution of the course are based on recommendations from the renowned Hawtree design firm.

Cork’s top amateurs will have a busy September as there are three senior scratch cups up for grabs.  Kinsale, Macroom and Castlemartyr are running their senior scratch cups in September giving category one golfers plenty of opportunity to grab a big win before the season closes.  Everyone enjoyed a four week swing in April with Muskerry, Lee Valley, Douglas and Cork all holding their scratch cups on four consecutive weekends.    Cathal Butler got his season off to a good start in March when he won the Top Golfer Senior Scratch Cup in Fota Island.  He followed that with a great fsplay-off win in Cork in May, and earlier this month he added the Killarney Scratch Cup to his growing haul.  He’ll be fancied around his home course in Kinsale for their scratch cup on Saturday 17th.  With both Cork and Monkstown competing in Carton House that week, there’s a god chance of a home winner.  Munster Boys winner John Murphy will be a threat as will Gary Ward, Timmy Broderick, Mark Healy and holder Sean Kingston.  Kieran McCarthy is also back playing out of Kinsale and the multiple scratch winner cannot be excluded from the list of potential winners.  Macroom will start the ball rolling on the 10th September and it’s the first time in several years that the competition will be held over two rounds.  Macroom’s Cathal O’Sullivan has been the driving force behind the relaunch of the event.  Nutricia have come on board as sponsors for the event which will be played over 36 holes.  The entry fee is just €30 including lunch and there’s a substantial prize fund in place.  The first round gets underway at 9.30am and the second round is scheduled for 2pm.  Full details are available from Cathal in Macroom.  Castlemartyr have stuck with their regular September date for the final major event of the year, although this year it’s going from a 36 hole event to a single 18 hole shootout.  Another large field of top amateurs from all over Munster is expected.  Castlemartyr’s Director of Golf Brady Sherwood already has a large number of bookings for the competition which takes place on Sunday 18th September.  Bookings and further information for all three competitions are available from each club.  Anyone else looking for competitive golf in the coming week should look at the list of events at the Cobh Open Week.  The series of events start on Thursday 1st and runs right through to Sunday 11th with singles, fourballs and mixed events.  Cobh have had a very busy year and were the first club to launch open nine hole competitions during the year.  The week marks a great opportunity to play the course at Marino.