It’s six years since Stephen Hayes took the reins at Douglas Pro Shop, taking on the challenge of working in one of the oldest clubs in Cork.  The past six years haven’t been great for the golf industry but in that time the PGA Professional developed a large following.  Working from one of the busiest courses in the county, Hayes has built a strong business in what was a tough time for everyone involved in the business.  Being a club pro can be a demanding job, the shop must be open 364 days a year, and for up to 12 hours a day during the summer months.  Add to that the fact that you need to find cover for the shop if coaching or playing, or even taking a day off, and you’ll soon realise that a pro-shop can be a demanding business for a PGA Professional.  Over the past two years the retail landscape has changed, the internet has become a real alternative to the high street or on-course shop.  The high street has changed too with the recent arrival in Cork of two major retailers which has heightened the competitive landscape. 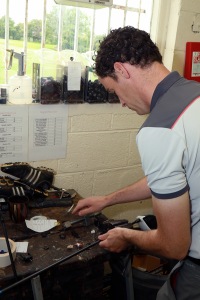 In spite of the demands, it’s a job that sits easily with Stephen.  “I always wanted to be a PGA Professional.  I liked the idea of being around a golf club on a daily basis and I always felt the Pro Shop was the central point of a golf club.” says Hayes who started his PGA training in 2003 with Paddy O’Boyle in Bandon.  In 2005 Stephen moved to Rathsallagh to work under Brendan McDaid.  After completing his studies and gaining his professional designation from the PGA in 2007, Hayes continued to work with McDaid in Rathsallagh and in Carlow Driving Range.  Then the opportunity of lifetime came in 2009 when he got the Club Professional job in Douglas.  Long-time Douglas Pro Gary Nicholson was retiring after 33 years service, and Hayes got the job from a long list of established PGA Professionals.  “It was great to get the opportunity in Douglas.” said Hayes.  “I had always looked at Douglas as a “big big” club and it really was the dream job for me.  I settled into the club straight away, the members were very welcoming and Gary Nicholson was very helpful with me when I took over.  I have a superb working relationship with Manager Conor O Brien.  Over the last five years we have worked very closely with Conor.  Douglas has been going from strength to strength over the past few years and it doesn’t look like slowing with investment being made in all areas of the club.”  Hayes started playing golf when he was 10, joining Lee Valley where his Mum and Dad played.  Stephen’s best score around the testing Ovens course was a 68 and in addition to representing Lee Valley at many Cups and Shields events, he also was capped for Munster at the Boy’s Interprovincials in 2000.

Running an on-course pro-shop is a very time consuming business but it’s a challenge that Stephen has embraced.  “I manage the hours fairly well. The first few years were very hectic getting the business up and running but we have a good routine now and I have had great staff right from the start” said Hayes.  “Brian O Donovan trained with me when I opened in 2010 and Brian stayed with me until 2013 when he qualified and took up a great opportunity to work in Mission Hills in China.  I had known Brian from my time working in Bandon Golf Club.  Brian is a very good professional and he is a superb player.  He recently shot a 59 in a local event in China.  Davey Barry then started his training with us in 2013.  Davey is going into his final year of his training.  Davey is a great guy to work with, he is always in great form and has a brilliant relationship with the members.  He has a bright future in the game. I was delighted to see him win his first Pro Am in Rosslare recently. He has worked very hard on his game over the last few years.  My wife Emer also works in the shop is a great organiser which makes my life a lot easier.”

“Retailing in Cork over the last few years has got tougher with the introduction of new companies to the Cork area.  However, we have great support of our members and we really focus on the quality of our service.  We specialise in many areas; coaching, club repairs, custom fitting and retail.”

Douglas Golf Club has put itself back on the golfing map after a difficult decade where talks of moving and multi-million euro deals dominated the club.  Douglas had long been a target for developers, who had earmarked the 125 acre prime commuter site.  A deal was struck with Castlelands in 2005 which saw the club receive an immediate payment of €6m and the full value of the deal was somewhere between €118m and €171m depending on the source.  Under the deal Douglas Golf Club was set to move to a new site between Donnybrook and Carrigaline.  The 400 acre site was set to two 18 hole courses, a par three course and extensive practice and clubhouse facilities.  The changing economic circumstances meant that the deal didn’t progress but the club still had the initial payment in the bank.  In the intervening eight years much discussion took place, both inside and outside the club about the future and the consensus now seems to be that Douglas Golf Club will remain on Maryborough Hill which has been its home for the past 106 years.  Over the past three years the club has seen an increase in membership.  The club lowered the joining fee and there was plenty of demand for all of the available places.  The new members provided a boost to the operational side of the club finances with each new member paying annual subscriptions in addition to the initial joining fee.  As well as the par 72 championship course on Maryborough Hill, Douglas also has a range which a popular place for all Douglas members, as well as Stephen and Davey.

One drawback from Stephen’s job is the lack of time for playing, especially during the Summer as he explained: “I don’t get to play much these days.  I find it hard to play during the summer months as the shop and course is busiest during this time.  I enjoy playing some golf over the winter months and play the majority of our Winter Series Events.  I enjoy getting out and meeting some of the other Pros and exchanging some ideas.” 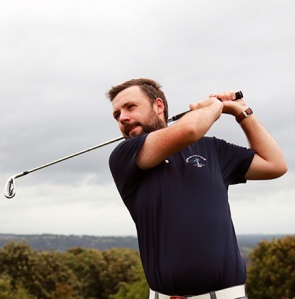 Douglas Assistant Professional Davey Barry continued his recent good form when he finished in the top 10 at the Irish PGA Championship last week.  The 72 hole event is the showpiece tournament on the Irish Region calendar and was held at the Moyvalley Golf Resort in Kildare.  Davey opened with a one under par 70 on Thursday to put himself in contention but signed for a disappointing 74 on Friday.  He had another 71 on Saturday in very testing weather and that saw him jump into the top ten.  Sunday was always going to be a big test for the Douglas based trainee, but he shot a one over par 73 in tough conditions and jumped from 10th place up to tie for 8th place.  The result comes on the back of Barry’s first win in a full field event at Rosslare earlier this month.  Davey has had a busy summer, based in Douglas Pro-Shop and working with Stephen Hayes, Davey has combined playing with his work in the shop and lessons at the busy golf course and range.  He is about to start of his final year in the PGA degree level programme and he’s enjoying the experience so far: “The first two years of the PGA Foundation Degree course have been really interesting” said the trainee.  “We have studied a whole range of subjects from golf coaching to time management.  It’s been a real eye opener for me, I used to think I knew quite a bit about golf, but learning from and talking to some of the best coaches and teachers in the game has shown me I need to keep my head in the books and keep studying.  It’s been great learning from people with such a deep knowledge of the game of golf and added to that they have a passion for the game also.”  The PGA course is not just a professional designation.  It’s a degree level course with a focus on the business of golf as Davey explained: The business side of the degree has been quite challenging for me.  Over the last two years though the course has helped with giving me a good understanding into the business side of our industry and again I have been very lucky working with Stephen as he has always helped here and involved me in the business side of the pro shop.  This has made my assignments and exams a little easier because it is now part of my daily life.  I have always taken huge interest in the mental side of the game and learning the theory behind it has been extremely enjoyable, and now it’s really helpful when planning team development programmes.”

Munster PGA back in Action

As Captain of the Munster PGA, Stephen is currently planning the schedule that will see up to eight events take place between October and March.  The playing schedule reflects the lack of nationals events and a time of year where most Pro’s will have the opportunity to get out and play.   “The Munster PGA is for any PGA Professionals working in or from the Munster Area.” explained Hayes.  “It’s an opportunity for Golf Professionals to meet during the quiet months.  It is very competitive and you need to shoot a low round to win each event.  For some players they use it as way of keeping their games sharp over winter months so they will ready for the playing season, while some professionals use it as a way of exchanging views and ideas.  The Winter Series for 2016/2017 has been kindly sponsored again by Cork based Premium Golf Brands.  We hope to have eight events over the winter months, weather permitting of course.  Four of the events will be professional only events and four events will be pro-ams.”  Around four years ago the Munster PGA committee put a lot of time and effort in to developing the winter series and each year since then the series have gone from strength to strength.  Over the past two years the winter series events have attracted between 30 and 40 golfers for each event.  Last year the schedule was disrupted by weather meaning that the players only got through a shortened schedule.  The season ending Morgan O’Donovan Trophy was played for again in Monkstown and it was won by David Higgins for the second year in a row.  Monkstown’s Cian McNamara won the Premium Golf Brands order of merit, thanks mostly to winning two of the events.  McNamara beat David Higgins who won in 2015.  With Higgins, McNamara, Davey Barry and David Ryan showing some very good form at present the first few events should be hotly contested.  The showpiece event will again be the Bill Rushby Waterville Pro-Am.  The event is going into its third year and there was a great purse on offer in 2015.  The event is hosted by Liam and David Higgins and is always well attended by the Munster professionals.    As well as having trade sponsors for most events, the overall series and Order of Merit is sponsored by Premium Golf Brands.  PGB is the Cork based golf-wear company that started as Eurostyle and now carries several top class brands including Calvin Klein Golf, Cutter & Buck, Green Lamb and Dwyers & Co.  The company can trace its roots in Cork back to almost 200 years and have been manufacturing golf wear for over 100 years.