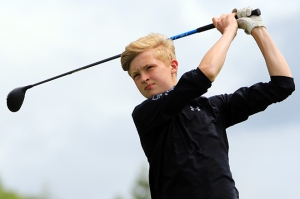 Muskerry’s Jack Egan had a positive start to his representative career as he came away with two wins, a half and a loss from his first two days in Wales.  The annual Quadrangular competition featuring Under 16 teams from Ireland, Wales, England and the Netherlands.  Egan was in action against the hosts yesterday, and while he lost his opening foursomes match with partner Sean Doyle on the 18th, he bounced back in the afternoon with a 2&1 singles win over Wales Tom Peet.  Ireland finished day one with a 9-3 win over Wales.  He was back in action this morning, this time partnering Josh Mackin.  They had a 3&2 win and Egan went on to claim a second win this afternoon in the singles.  Ireland at tied at the top of the table with England and the top two will face each other tomorrow in a winner takes all decider.  Egan will be back in action with Mackin for the morning foursomes.

International duty prevented Egan from playing the Munster Boys Under 16 Championship which took place in Blarney on Monday and Tuesday.