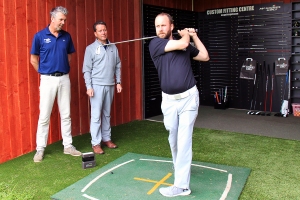 Frankfield Golf Range continues to develop, and owners Coleman and Michael Ryan have succeeded in building a wonderful practice facility on the grounds where Mick Ryan Snr built a golf course over 30 years ago.  A new short game area have been developed and now custom fitting has now arrived in Frankfield. The new fitting centre at the range provides golfers with hundreds of options when it comes to investing in new equipment.  Working with McGuirks, Frankfield’s resident PGA Professionals Michael Ryan and David Whyte can match shafts with heads and grips to provide a truly customised solution for each golfer.  Frankfield has teamed up with McGuirks to provide the new service.  The retail chain has a shop just 800m from the range and now golfers can test the latest equipment options under the watchful eye of a PGA Professional.  A full range of heads are available for drivers, woods and irons from all of the major manufacturers, in addition to a very extensive range of shaft options and grips.

Using their experience as PGA Professionals, and the assistance of launch monitors, Michael and David are very well placed to offer information and advice on the various options that are available to golfers who are looking to purchase or upgrade their clubs.  This adds another important service aspect to Frankfield.  Increased competition in the retail space meant that a stand-alone independent shop would be difficult to maintain in the range, and the strategic link with McGuirks allows David and Michael to provide a valuable service for anyone interested in investing in new equipment.  A fitting session costs €25 for around 30 minutes and the information is shared with McGuirks store in Cork where they can use the specifications to order the clubs for customers.  Anyone who does go on to buy from McGuirks will get the €25 fitting charge taken off the cost of the clubs.  There’s also some added value in have a PGA Professional carry out the assessment as Whyte explained: “We’ll also give a few recommendations on the basics if they’re needed, grip, stance etc., and swing adjustments are included in the fitting as you would need to fit a client for how they should stand to the ball and the path on which they ideally should approach the ball with their swing.” 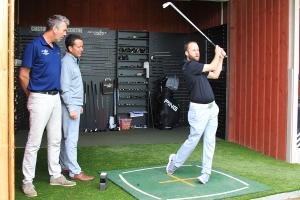 The new fitting bay was designed for year-round access. The covered bay has been fitted with a key new lighting system meaning it can be used at night and all through the winter.  The walls of the bay have been racked with over 100 different shaft types and each of these can be interchanged with iron or driver heads from multiple manufacturers.  The latest gear from all of the major manufacturers are there onsite ready to be tested, giving golfers endless combinations to get the very best from their purchase.  Philip Ring from McGuirks is delighted with the new fitting centre and sees great benefits for golfers.  “It offers the golfer the opportunity to test different brands performance against each other” said Philip.  “Here you can see both the actual flight of the ball as well as a computerised simulation.  The feedback shows flight, carry and roll distance, direction and spin rates. This info is compiled to get you the right club custom fitted with the shaft most suited to your game.  Consistently coming out on top are the TaylorMade M2 and Callaway Epic drivers.  The clubs are expertly fitted by David and Mick. Getting custom fitted makes a high difference to your game and we’ve had several people gaining 30 yards and more from the tee.”  Now firmly established on the Cork golf scene, McGuirks is one of a growing number of off course retailers.  “We believe the customer is enjoying the wide range of apparel and equipment as well as unbeatable prices” added Ring.  “Brands like Under Armour Nike and Adidas are very popular along with hardware brands like TaylorMade and Callaway.  The excellent team of Denis Doyle (PGA), John O’Brien, Lisa and Eileen are headed up by John McSweeney and together they’re a superb team and quick to offer advice.” 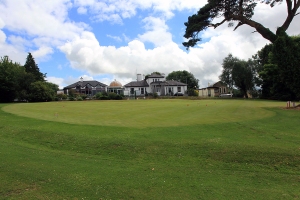 The installation of the custom fitting bay is the latest of several new innovations at Frankfield that has transformed to facility from a simple range to a full academy.  The range itself deserves a mention, it was one of the first floodlit covered ranges in Ireland, and it now boasts 25 covered bays and over 50 grass bays.  A new short game area was developed over the past two years and incorporates two target chipping greens and a large 18 hole putting course.  David Whyte has been attached to Frankfield for over two decades, and along with Michael and Coleman Ryan they have overseen the development of the academy and the services available to golfers from all over Cork.  “Our newly opened putting course and short game facility are a great addition to the range” explained Whyte. “The putting course is great fun and very challenging, the short game facility is unrivalled as it’s in pristine condition, and it’s available to all golfers and only 5/6 minutes from the city.”  In fact it’s now the only place where a golfer can practice their putting and short game since Fota’s Academy moved to a members only model in January.   The short game area was developed over the past 18 months and now features two target greens.  The two chipping greens were part of the original course and now feature a number of well-placed bunkers, uphill and downhill approaches, and the option to chip from the greenside or pitch from up to 70 yards.  The putting course evolved from the original 9th and 18th greens.

A great deal of work went into blending the two greens and the result is one of the biggest greens in Ireland covering almost 1500 square metres.  The fast running green features a cleverly positioned par two putting course which is set to be a tough test even for good golfers.  Access to the short game are is just €5 per session and golfers can use the chipping greens and short game area in addition to the putting facilities.  The range and the short game areas are open to everyone, and there are as many casual golfers accessing the facilities as club members.  The casual golfers will head out to hit a bucket of balls or have a game around the putting course, while the more serious golfer will probably approach the session with a clear practice plan in place.  Michael and David are currently running a summer special for anyone looking to get into the game or improve on their current standard.  A pack of two lessons is available for €45 and golfers can use this to tune up specific parts of their game.  It’s fair to say that David Whyte has seen a lot of change in his time in Frankfield.  The Naas native has been the resident PGA Professional in Frankfield for over 20 years and along with Michael Ryan the two have ensured that Frankfield has become a hub for golf tuition.  Having served the Cork market for over 35 years, the facility can now be truly described as an academy thanks to recent developments including a short game area and putting course.  The golf course may have closed but Frankfield remains a key asset in the Cork golfing landscape and the range and academy continues to be a very busy and popular spot for Cork golfers.