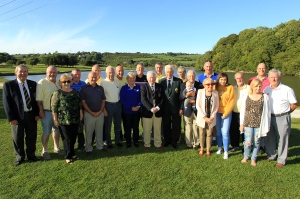 There was lots to talk about in Raffeen Creek recently.  The President of the GUI, John Moloughney paid a courtesy visit to the club and commented about the fact that there were two flags on every green.  The occasion was Trevor McCarthy’s President’s Prize and he came up with a clever plan to have two flags in place on the nine hole course.  Members aimed at the blue flags for their first nine holes, and the yellow flags were the target on the second loop.  It was the first time that someone used that format, and as it was within the rules of golf it was perfect for the major competition.  While some may have been skeptical, the two-flag initiative proved to be a great success as the Trevor explained.  “The two flag competition was played by both the men and the women” said the President.  “It was given a mixed reaction before playing but coming off the course everyone thoroughly enjoyed their game, saying it really helped keep their concentration on the game.  I as President was delighted my idea of the two flags was such a success within the club. I would like to see this come in for all major events.  It was an honour having GUI president visit the club. It meant a lot to have him there on the day of the competition.  The past captains and presidents really enjoyed his visit.”

Seanie Barry won the innovative competition recording 40 points.  Sean O’Connor was second with Tony Burke third with only one point separating the top three.  Ger Farrell won the ladies competition with Imelda Meade in second place in another tight competition.  Trevor was delighted to welcome John Moloughney.  It’s almost 30 years since the club last hosted the GUI President, that took place at the official opening of the club back in 1989.

In 2019 the course will celebrate its 30th anniversary and the Eddie Hackett nine hole design has stood the test of time.  Built at the south-eastern end of the Ringaskiddy inlet, the course has been largely unchanged through that time.  The golfing history of Raffeen dates back to the late 1960’s when Pfizer first located in Ringaskiddy.  Over time the Pfizer Golfing Society became one of the largest and best organised societies in the country.  Notes from local golf historian Tim O’Brien state that members of the society raised the idea of forming a club in the mid 1980’s.  According to O’Brien the members had their eye on a piece of land adjoining the factory and convinced Pfizer to support them.  A £200,000 investment from Pfizer was supported by a substantial contribution from the members, and a new course was born.  The members engaged renowned Irish golf course architect Mr Eddie Hackett to design and oversee the building of the course.  Members commenced play in March 1989 and the Club was officially opened by the President of the Golfing Union of Ireland, Joe Quinlan, in June 1989.  An exhibition match marked the official opening where Irish Amateur internationals Denis O’Sullivan and Tom Cleary took on tour professional Christy O’Connor Snr and Monkstwon club professional Batt Murphy.  The match was made all the more memorable when Batt Murphy aced the 9th – marking the first hole in one on the new course.  For the record it was the amateurs who won on the 18th.  In 2015 the Club entered into a lease agreement with Pfizer n respect of the golf course lands and clubhouse.  This allowed the Club Management Committee full control of the club operations and provides security for the members.  The club remains open for membership and local PGA Professional has a junior academy based at the course.  Following his last visit to the Club in 1996, Eddie Hackett wrote, “I love this course, full of charm, every hole in a different direction and each with its own special charm and unique features.” His philosophy for golf course design was to let what nature had created alone and work with the terrain as he found it.  Having seen the highs and lows of golf in Ireland over the past three decades, Raffeen is well placed for the next three decades.