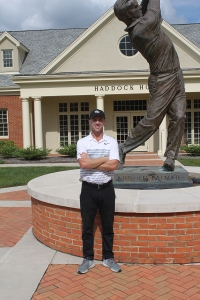 After over a decade in the America, Aaron O’Callaghan Made another big career over the summer, taking up the position of Associate Head Coach at Wake Forest.  After four years with the Cardinals at University of Louisville, the Douglas native headed for North Carolina to coach with Wake Forest.  The Deacons are ranked as a top 25 college in the NCAA Division One golf rankings, playing in the top level of college golf.  Head Coach Jerry Hass, brother of tour star Jay Haas, has led the Deacons golf programme for over two decades.  He joined Wake Forest 20 years ago and rebuilt the golf programme, winning 15 conference titles and 15 individual wins over that period.  The ranking and legacy of success at Wake Forest makes O’Callaghan’s move a great career choice, and with a strong player roster hopes are high that Aaron can add to the results that have repositioned Wake Forest.  “Dan Walters [Associate Coach in Wake Forest] had a business opportunity that was going to take them out of college coaching” explained O’Callaghan, who initially qualified as a PGA Professional after college.  “As a result both he and Head Coach Jerry Haas reached out to me to see if I was interested in the position. I have had a relationship with Coach Haas over the last four years since I’ve been in college golf.  I have always respected and admired him.”  Haas is a former tour pro, and brother of Jay Haas.  Ireland’s Paul Mc Bride recently graduated from Wake Forest and soon after turned pro, he’ll be one of several Irish golfers to tee it up at the European Tour Qualifying School later this month.  Alex Fitzpatrick, brother of tour star Matt Fitzpatrick is currently in his second year with the Deacons.

Aaron hit the ground running when he joined Wake Forest a few week ago, with several scouting trips in addition to several other pre-season duties.  “Yes, I have been very busy since I started on July 1st.  I have been to Baltusrol, Valhalla, and Pebble Beach for recruiting, just to name a few.  At Wake Forest we are recruiting the very best junior players in the world.  My role will include structuring practice, scheduling, operations of the program, playing with and instructing the team, recruiting, and connecting with donors.”  Last week the Deacons played in their first event of the season in Louisville, starting brightly with a record setting opening team score of 268, certainly a positive note for O’Callaghan at his first Deacons event.  While O’Callaghan has been in the US for well over a decade, his move to Louisville was a big jump in his golf career and he certainly benefited from his time in Kentucky.  “I spent four years coaching at the University of Louisville and I learned something new every day” explained O’Callaghan.  “What stood out the most at Louisville was the amount of support that student athletes receive there.  The Athletic department has invested hundreds of millions of dollars for the student athletes so that they can have every possible advantage.  The College sports arena is a major business and it is very clear to see that the university of Louisville is very important to the entire city.”  His time at Louisville was productive from both sides.  In his four seasons at Louisville, O’Callaghan helped the Cardinals to four team victories, three NCAA Regional appearances and a 14th place finish at the 2016 NCAA Championship.  After completing four years in college in the US, Aaron looked at tour golf as a possible career pathway.  “Initially, I considered trying to play for a living but was very uncomfortable trying to raise the money to take on that task.  I also felt that my game wasn’t consistent enough to make it at the top level.  I didn’t want to have any part of a secondary level so I decided to enter the PGA as an assistant pro at Baton Rouge Country club.  This was a perfect opportunity for me to learn the business, continue playing golf, and teach, and I was able to make a nice living.”  From there it was on to Louisville and most recently onto North Carolina.  It’s a three hour flight but a nine hour journey by road so there was a logistical challenge for Aaron and his wife Kristin as the moved East.  “The move to Winston Salem, NC turned out to be pretty seamless.  Kristin is always on top of things and we were able to sell our house in Louisville and buy a new one in a relatively short period of time.  We are still unpacking boxes but extremely happy in our new home, which is located only minutes away from the University.”

Like most full-time employees Aaron’s opportunities to play are now more limited.  His new boss however has opened the conversation about playing more golf, and that has resulted in Aaron playing a bit more and a long term aim.  “I really haven’t played any golf for the past four years. I would occasionally hit balls.  Coach Haas wants me to play with our team on a regular basis and I’ve already started doing so.  I love the game and I’m still competitive, so I know that with some practice I will be able to compete at a high-level.  I would like to compete in the off season in professional events, and one of my goals will be to play in the PGA Championship.”