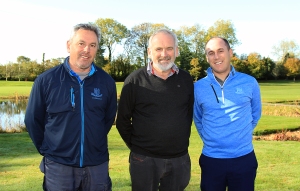 Monkstown’s Hilary Madden will retire this week after 16 years as general manager in the golf club.  It’s been a very eventful time for golf clubs in Ireland, with big changes happening in those two decades.  In 2002, when Hilary took on the role in Monkstown golf in Ireland was very different.  There were waiting lists and large entry fees for anyone wanting to join, that period also marked a big increase in the number of courses.  Like many other courses, Monkstown had impressive development plans at the time which included an impressive new clubhouse, a new maintenance and greenkeeper compound.  Work on the course which drainage and bunker redevelopment, and it fell to the manager to oversee the plans which was set to reposition Monkstown back to the top table.  Luckily for Monkstown the work was completed by time the downturn came, but they still had to finance the projects which was a challenge for the club.  “As common with most clubs in Ireland the economic depression from 2008 to 2014 resulted in a drop in membership income.   The club had to cut back on day to day expenditure and postpone development plans.  I was fortunate that the club realised that it had good staff and they were no forced redundancies.  The economic outlook for Ireland has improved and the country was the fastest growing economy in Europe last year and the club is now looking at a development plan for the next number of years.”

Having taken up the fame over 40 years ago Hilary has seen lots of change in the sport in that time.  “The job has certainly got more demanding with increased regulations.  The expectation of members and visitors for increased course and clubhouse standards” added Hilary.  “When I first started playing golf, the greens were generally cut three times a week.   The machinery consisted of a tractor, two sets of gang mowers and if you were lucky three Ransoms hand green mowers.  But the members still had fun and consequently annual subscriptions were a lot lower.  To many, golf club membership is now seen as like any other service you buy.  Clubs will need to become more family orientated and appeal to younger people, outdated dress codes will need to change.  The length of time necessary to play 18 holes is an issue.  More nine hole and 13/14 hole competitions need to be available.”

Hilary joined Kinsale Golf Club over 40 years ago, and as well as representing the club on the course he has also served on the committee and currently holds the position of treasurer, a role he first held 30 years ago.  “I joined Kinsale Golf club in 1974 which was about 20 miles from where I lived.  The club really encouraged me and the juvenile section of about ten members played in all the Juvenile events in the region. I eventually achieved a handicap of 6 and represented the club on various representative teams. The club has played a big part in my life and I was fortunate to meet my wife Jeanne who was also a member of the club. I became involved in golf administration as Club Treasurer in 1987 and was Captain in 1992.”   Hilary was involved in Kinsale’s move to Ringenane 25 years ago, long before the role in Monkstown would come up. In 1993 the club planned an ambitious move to a new greenfield site in Ringenane and Hilary was part of the subcommittee that was responsible for the new 18 hole course.  A few years later, Hilary would be back involved with golf club affairs, but this time on the other side of the table.  “I always fancied the idea of being a Golf Club Manager and I applied for the position at Monkstown Golf Club which became available 2002.”  Hilary has many memories from his times in Monkstown and while there were challenging times over the past decade, there are also some very enjoyable things that he remembers.  “The part I enjoyed most was the hosting of big golf events.  During my time at Monkstown the club has hosted many big events, the pinnacle being the All Ireland Finals of the Inter Club events in 2008 the centenary year of the club.”