Alex Newenham from Douglas has landed one of the biggest “busman’s holidays” in golf, as he has been selected to work as part of the course team for The Players Championship at Sawgrass in Florida next week.  While many golfers would love the chance to attend a tour event, Alex will get an inside the ropes experience at the event that’s known as the fifth major.  John Deere, the machinery providers in Sawgrass have worked with the greenkeeping bodies in England and Ireland (GCSAI) to give seven greenkeepers an opportunity to work at the showpiece tour event.  Alex, who has worked in Douglas Golf Club for the past 14 years, was selected following an application and interview process completed late last year.  His reward is a 13 day trip to Florida, taking in eight days at the Players.  “This is the sixth year of this partnership and is open to all members of the GCSAI to apply” explained Alex.  “I applied last October and was fortunate enough to be shortlisted along with three others for interview in November.  I was so delighted later on that day to receive word that I had in fact been chosen to represent the GCSAI this year in Sawgrass.”  Alex is one of a large number of professionally qualified greenkeepers in Ireland, he graduated from UCD with an honours degree in 2002 and stated in Douglas in 2005.  He’s back studying again now as he’s taking a course in Golf Course Management in Elmwood College in Scotland.

The Douglas man is only the second Munster man to be selected and he has a busy few days ahead.  “I leave Cork tomorrow and meet the BIGGA greenskeepers in Manchester before we fly out to Orlando” said Alex.  “We arrive into Sawgrass, via Daytona Beach, on Saturday where we are given our work uniform for the next week and we get a briefing on what jobs we’ll be doing and the standards expected while we are there.”  It’ll be an intense week for Alex and the John Deere volunteers.  With tournament conditions expected for the full week, the greenkeeping team will be working double shifts to bring out the best at the famous championship venue.  “The morning shift then starts at 5am and we work till about 10.30-11am.  We then have free time when we can have some kip, or most likely watch some golf or practice on the range.  We are back to work again at 4pm and we work till 10pm before being dropped back to our digs for much needed sleep.  This routine continues throughout the week.  The first few days are a case of getting ourselves familiar with the course, our team and our specific roles.  There will be no big crowds at that stage so hopefully we’ll get an opportunity to meet some of the players as they practice before the tournament.”

The programme, which is run by John Deere, is an international initiative.  There will be a team of 90 greenkeepers from 14 countries at the event next week.  All will be hoping to learn from the first hand experience of a PGA tour event.  A spokesperson for TPC Sawgrass said: “At the end of the day, the volunteers make all the hard work of our tremendous staff really shine. They also get invaluable experience in preparing a course in exacting, television close-up standards, as well as the opportunity to network and learn.”  The team will also have a chance to play the famous 17th hole on Sunday evening after the event finishes.

With one of the highest ranked fields in golf, and the largest TV viewing figures, Sawgrass is noted for it’s Augusta-like appearance.  While cutting greens will probably be managed by the permanent greenkeeping team, Alex and his team will be involved in all other activities.  “Our jobs can vary.  I’m assuming that bunker raking is a given, however handcutting the roughs is also possible along with fairway mowing or tees mowing.  I really don’t mind what I do there because just being there, part of an enthusiastic team will be great and even doing mundane tasks with a group should hopefully make the whole thing exciting.” 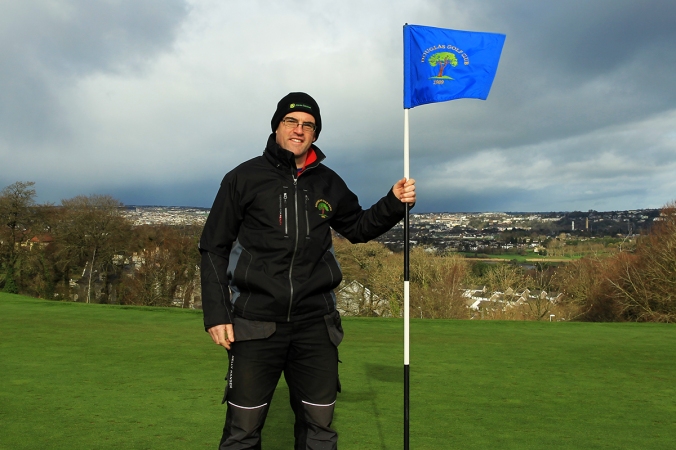 Hockey, running, family life – and of course the day job…

There’s more to Alex Newenham than just his job, as well as an active long distance runner, Alex also plays hockey with Harlequins and was selected on the Irish Over 35’s team last year.  “I’m a keen sportsman and have been fortunate enough to compete to a high level at both personal sports and team sports.”  That focus has helped Alex to develop a career from a stating point in college 17 years ago.  “I graduated from UCD in 2002 with an Honours Degree in Horticultural Science and I eventually found my way to Douglas Golf Club in 2005 and have been part of the team there since.  It’s fair to say that my basic degree was a help to get in the door but it was really what I learned on the job and under the supervision and guidance of Peter Morris and his team that I know what I know now.  As a family man I am so thankful to Douglas Golf Club for the last number of years for the opportunities it has allowed me take and also the secure job it has afforded me, especially when times were tough for many in our industry.  I have also recently started further study to try and formalise what I have learned in my time in Douglas. I am studying Golf Course Management in Elmwood college in Scotland and so far that is going well.  Again I’m thankful to Douglas GC for making that possible.  Douglas is set for an exciting year ahead with the opening of our new practice facilities.  It has been fun to watch that come to fruition. The recent planting of nearly 500 trees is also a major addition to the course and is certainly going to make golfers plot their course more carefully around the course while adding major benefits to the aesthetics and ecology of the place.”