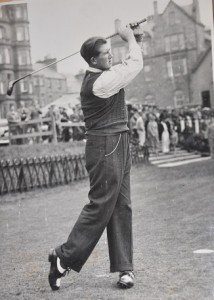 It’s likely that 2020 will produce few enough golf headlines, but 2020 is the 100th anniversary of the birth of the great Jimmy Bruen Jnr.  Born in Belfast, the Bruen family moved to Cork when Bruen was 5, his father took up a job with Dwyer & Co, another family closely associated with golf in Cork.  Bruen is associated with both Cork and Muskerry.  Although he had played in Cork Golf Club as a teenager, Cork’s rule of not allocating handicaps to those under 18 made Bruen look to Muskerry.  He wrote to the club when he was 15, seeking a handicap in line with the Muskerry club rules.  According to golf historian Tim O’Brien, Bruen submitted his three cards but was asked to play a round with the club captain before a handicap was approved.  Bruen must have impressed in that round as his starting handicap was six.  That handicap was god enough to gain entry into the 1935 British Boys in Royal Aberdeen, and with experiences like that, it didn’t take Bruen long to get down to scratch.

Just one year later he won his first major title in Birkdale, claiming the British Boys title at the famous open venue.  After scraping through the first round with a win on the 19th, Bruen had a few easier matches on his way to the final.  The 36-hole was very one-sided. Playing Scotland’s William Innes, Bruen was 7 up after 9 holes and remained 7 up at the end of the morning round. Bruen continued to dominate in the afternoon and eventually won 11&9, to become the first Irish winner of the championship at the age of 16.

He followed the British Boys win with an Irish Close title in 1937 with a famous win over the Lahinch legend John Burke.  In spite of the big wins in 1936 and 1937, Bruen would have an even better 1938.  He pulled off the Irish double of the Irish Open and the Irish Close and ended up on the Walker Cup team.  Bruen won the Irish Amateur Open in Royal County Down, and he retained his Irish Close title in Dublin’s Castle beating Cork’s Redmond Simcox.

1938 was also Bruen’s first appearance at the Walker Cup, and his only win in three appearances.  In fact it was the first time that GB&I won the event, and it would be another 33 years before they would win again.  Bruen was the youngest ever golfer to play, and he was still a student in Presentation Brothers Cork meaning his father needed to seek permission from the school to be released for the competition.  Bruen’s results in the match weren’t spectacular,  he halved his foursomes match and lost his singles match on the 17th, but his ability and confidence, and especially his performance in the practice sessions lifted the whole team and helped GB&I to their first Walker Cup title.

The gap between amateur and professional golf was much narrower 80 years ago, with amateurs regularly entering the event.  Bruen entered the British Open for the first time in 1938, and the Corkman held a share of the lead after the opening round in Royal St George’s.  His opening 70 was followed by a disappointing round of 80, and he missed the cut by one shot.  The 1939 Open Championship was played in St Andrew’s and Bruen shot two opening rounds of 69.  That easily made the cut to finish in 13th place and the leading amateur in the field.  Just as Bruen was building his reputation the calendar was interrupted by the war.  Much of the 1939 calendar was disrupted and championship golf was effectively cancelled from 1940-45.

At the conclusion of the war, normal life resumed in 1945 and the golfing calendar also resumed in 1946.  It’s said in Cork Golf Club that Bruen’s entry into the British Amateur in 1946 was a reluctant one, he married Nell in 1945 and was busy building his insurance business at the time.  The trip to Royal Birkdale was his only major championship entry that year.  The Cork man made the most of it, and while details of his wins in the earlier rounds are limited, the power generated by his swing quickly became the talking point of the tournament as he broke three clubs during the early matches.  He went on to win the final, beating Robert Sweeny 4&3.  Later that year, Bruen was appointed as Captain of Cork for the second time, a huge honour and no doubt a gesture from the membership to recognise his achievement in being the first Irish golfer to in the British Amateur. 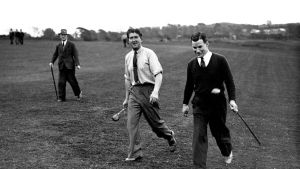 That would prove to be the last great win for Bruen.  A serious wrist injury in 1947 limited his golf.  He withdrew from the Walker Cup team and didn’t play again until 1949.  He played on the 1949 and 1951 Walker Cup teams and in 1950 his last major victory cane when he partnered professional Wally Smithers to win the Daily Telegraph Foursomes in Formby.  A quote from the great Henry Cotton summed up the Bruen’s golfing legacy, “his career at the top was short but it was exciting, very exciting.”  Bruen maintained his links with Cork and was nominated as President in 1960, and again in 1971.  He died in 1972 while in office aged just 52.  Although his amateur career was cut short by the wrist injury, and his early death aged just 52, Bruen is still fondly remembered in Cork and beyond.