As well as clearing vegetation, natural wetlands are also being promoted like this area under the 8th tee at Cork Golf Club.
Picture: Niall O’Shea

The work at Cork Golf Club continues as Simon O’Hara and the course staff continue to peel back the layers to reveal some of the original features of the famous cork course.  Well over 120 years after the club moved to Little Island, and 95 years after Sir Alister MacKenzie laid out the current course, it’s almost a case of back to the future for Cork as the limestone walls and original views are revealed.  The projects are being led by Cork’s Superintendent Simon O’Hara and the team of skilled greenkeepers.  O’Hara moved from Fota Island to Cork two years ago, and soon after he arrived he started to make a few changes.  He reinstated the practice chipping green which is adjacent to the 18th fairway and last spring he oversaw the removal of the large putting green and replacing it with a brand new one. 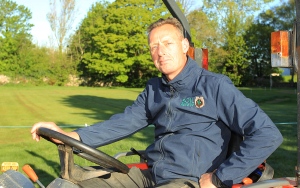 This time last year Simon and the team set about a major project to improve the views of both the water and the quarry.  After months of hard work by the team, the vision became reality.  A large proportion of gorse, trees and shrubs were removed in front of the fifth tee to give clear views of the fairway.  Further clearing around the fourth green also brought the water and some of the quarry into the eyeline.  In addition the bank behind the fifth green was also lowered, not only to make hitting the green a little bit more difficult but also to bring the Loughmahon Estuary into view behind the green.  There were changes as well on the third hole.  Known locally as the Guileen, the area of tidal water is now in clear view as all of the shrubs, gorse and trees have been removed.  While the changes shouldn’t have any impact on the difficulty of the hole, it does add an impressive visual aspect to the short par four.

Further clearing work has continued on the 7th, 8th and 9th to expose more of quarry limestone.  While the team in Cork have cleared quite a bit of vegetation to reveal the tall walls that surround the quarry section of the course.  While some of the work has been to improve the aesthetics of the course, the course team have also had an eye on the ecology of the course.  The traditional wetlands in the quarry section have been retained and two new areas have been created in the 7th and 8th holes.  Many lodgepole pines have been removed over the last few years but the team has planted thousands of immature scotts pine trees which in time will reframe the fairways.  O’Hara is very happy with the progress so far, and appreciates the natural elements he has around the course.  “Opening up the views to the Estuary was common sense” explained Simon.  “This is a hugely valuable piece of land, in terms of views, interaction with nature and the extra physical piece of land on a very tight golf course.  We are planting thousands of immature Scott’s Pine trees on the right of 2 and left of 17 that will in the long run, provide fantastic definition for each of these holes.  I believe that there remain very exciting opportunities to make better use of this land in the future. It would be great to bring the water more into play on holes 3 and 4.”

Now with two years of practical experience on the Little Island links, O’Hara feels at home in Cork Golf Club.  “I feel incredibly fortunate to be working at Cork Golf Club, for a variety of reasons. Cork possesses many unique elements that individually would be a treasure on most courses, but to have the quarry rock faces, the wetlands, the estuary, the MacKenzie design and Cork harbour is remarkable.  Additionally I am blessed with an amazing crew who bring great ideas, passion and commitment to the job. I am equally fortunate to closely work with Matt and Brian, the green’s committee and chairman, and board of management.  They provide great energy, enthusiasm, practicality and support.  Collectively we all share the same ambition, to continually refine the golf course, to improve its ranking, playing condition and aesthetics.”

After five weeks of the most course closure, members will be hoping for benign weather conditions for the coming weeks to allow then to get back on the course.  While the last few weeks have brought plenty of rain, the free flowing soil and limestone bed in Cork will mean that rain shouldn’t stop play for Cork members.