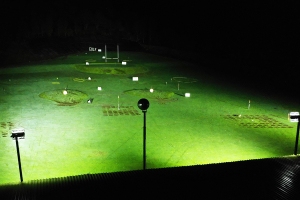 Cork Golf Centre has seen a major upgrade in 2020 with golfers now benefitting from better lighting and a longer hitting area.  The centre just outside Ballincollig used the two lockdowns to implement some planned improvements, and it’s been a busy place since the recent reopening.  When the centre opened in May 2017 it was a much needed addition to the western side of the city.  It was within easy reach of a large number of golfers stretching from the city to Macroom.  David Keating was behind the development and his vision was to provide golfers of all levels with a positive experience.

From the start David and the team have worked hard to improve several aspects of the range and teaching experience at Cork Golf Centre.  The centre opened with top quality mats and balls, and coaching was available from the three resident PGA Professionals, Wayne O’Callaghan, Liam Burns and David Keating.  The next step was a major upgrade to the teaching bay with the addition of a Trackman simulator, and this was further enhanced with the addition of a second dedicated teaching room.  Indoor putting greens were added with added options for putter fitting and putting lessons.

This year, the work continued with the replacement of the lights with new LED models which gave golfers an enhanced view of ball flight and distance.  In November the range was also extended with the clearance of the gorse at the far end of the range.  The clearance work and new netting was the most recent development to take place, and it was needed.  During the clearance work well over 10,000 balls were found.  That highlighted the need for the additional space added by the clearance and the installation of nets. 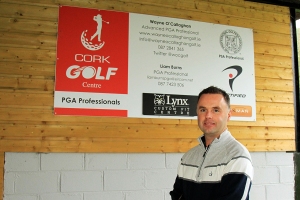 Wayne O’Callaghan has been based at Cork Golf Centre since it opened nearly four years ago.  The centre is now his main teaching base and he’s delighted with the work that has taken place this year.  “The centre underwent a major renovation in the lockdown period with new nets installed” explained O’Callaghan.  “These have extended the carry distance of the range to approximately 280 yards, as the structure is 65 feet higher than our golf sign.  It was a massive job as the structure installed is 120 metres wide and 65 feet high and looks fantastic when lit up at night as you approach the centre from the Ballincollig side.  Towards the end of the summer we installed four high powered led lights and now patrons of the centre will be able to see their full ball flight, also plenty of new targets have been installed so golfers can measure their distances.”

Golf has seen a big surge in both players and club members.  After a decade declining numbers, there are easily over 1,000 extra members in Cork clubs at the end of 2020, and hopes are high that these new members will retain their interest through 2021 and beyond.  There has also been an increase in junior golf and casual golf, and as a result Cork Golf Centre was a busy spot through the summer months.

“The result of Covid has seen a massive boom for golf this year and along with our regulars we have seen many new faces at the centre taking up the game” said Wayne.  “Lessons are available with myself 7 days a week, David Keating is available on Fridays and Saturdays with Liam Burns available Monday evenings.  The centre has two Trackman studios and a state of the art putting studio with Capto and Sam Putt Lab.”  Wayne has been very focused on putting for about three years, and he has invested both time and money in this element of the game.  As well as investing in the latest analysis and training tools, Wayne has also studied under leading tour coach Phil Kenyon to ensure he’s the leading edge of the growing area of putting coaching. 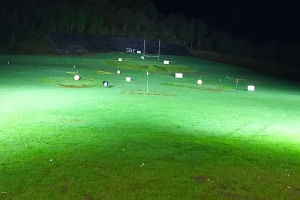 Cork Golf Centre after the completion of a number of projects this year.
Picture: Niall O’Shea

Whether you’re looking for a lesson, club fitting, swing or speed analysis, or if you just want to hit a bucket of balls, Cork Golf Centre has something for everyone.  They even have linked in with performance and fitness coaches.  While the heavy rain from the past two weeks will have closed many courses for several days, the covered bays in the driving range means that Cork Golf Centre remained open despite the weather.  The team are taking a well deserved break tomorrow but they will be back open again on Sunday for anyone looking to get out, or for anyone looking to try out the new clubs that santa brought.