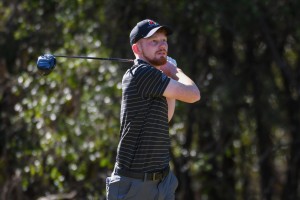 John Murphy was back in college golf action last week for the first time in ten months, but the Kinsale golfer has kept himself busy.  After working hard in Cork for the summer he travelled back to America last August, and he was determined to make to most of his extension as a student in University Louisville.  Murphy was a Senior last year but the cancellation of the second half of the season gave him another opportunity to compete in the 2021 NCAA college golf schedule.  It was a big decision to return in August, when many European based golfers chose to stay at home, but it paid off for Murphy, providing him with the weather and the facilities to improve his game.  “I felt as though the semester was really productive.  As always, I am just trying to learn and grow as much as possible as a player, and being in this environment certainly allowed me to do that.  I was able to compete with the world’s best players, practice on a daily basis and focus on other important aspects of my game such as my mental and physical conditioning.  I’m very happy with how I used my time and now I feel as though I have further grown as a player.  The lack of college and lectures actually suited me great, it meant I could dedicate my mornings to things like gym work and preparation for the day, and then focus on playing golf until it got dark.  Evening times gave me a great opportunity to catch up on college work.

The event in Florida last week didn’t go Murphy’s way.  He had a disappointing 79 in the second round but bounced back in the final round with a six under par 66.  That saw him jump over 20 places on the leaderboard and was a sign that the form is still good.  The team got another boost on Saturday with a late call up to a tournament in California this week.  For Murphy and all college golfers, the key will be rebuilding the tournament feeling after several months without qualifying competitions. 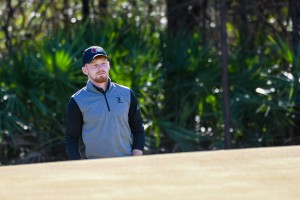 It’s clear that Murphy made the best of the facilities, and the opportunity to effectively practice as a full time golfer, so the decision to return to the US was one that he was very happy with.  In addition to the practice, there were a few playing opportunities.  Murphy made the most of it with a win and two top ten finishes to show for his six starts.  Those results, and the good conditions compared with and Irish Autumn worked to Murphy’s advantage.  “My decision to go back in the fall was one that could have gone either way, but being provided with the world class facilities that we have, it gives me he perfect opportunity to get better, and that’s all I want to do.  Also, getting to compete is a huge part of who I am, and with the lack of restrictions in the US it gave me the perfect opportunity to play competitive golf.

Competitive golf is where Murphy is at his best.  From winning the Munster Boys in 2016 in Dromolond, to his win in the Munster Students in Cork in 2017, he was used to winning.  His biggest win came in 2018 when he won the St Andrew’s Links at the home of golf in St Andrews.

With a decent shift put in from September to December, John returned home for Christmas, but it was slightly different to the Christmas holidays of previous years.  “The Christmas break was obviously a little different. It was great to get to spend so much time with my family.  Not being able to see my friends was a bit frustrating but in the scheme of things, it’s quite irrelevant.  Christmas is normally a time for messing around and having fun, but with the restrictions put in place this year, I saw it as a perfect opportunity to assess my game and put in a lot of hard work.  There were a lot of cold mornings on the range or the course with Ian Stafford, but I am very pleased with the work we got done.  Normally when I’m back home I don’t get much opportunity to really change anything because time is so limited, but I got to see a lot of Ian and Paul Kiely this Christmas and I feel great about where my game is at heading into 2021 as a result.”

As well as two wins on the course, Murphy also claimed another big honour last season.  He was the first University of Louisville to win the Byron Nelson Award.  The award recognises golfing, academic and social successes and it was a nice finish to the shortened college season for Murphy.  Part of the award for John is a place at the Byron Nelson Classic on the PGA Tour.  He’s now looking forward to a trip to Dallas in May for the high profile big money event, although he will be competing as an amateur.  Murphy also broke a Cardinals record, setting a new single season scoring record with a scoring average 69.59 stroke per round.  He is also currently ranked in third place in the career scoring ranking with an average of 71.98.  He was just one four golfers in the Cardinals golf programme history to win two events in one season.

While John’s plans for 2020 were disrupted, it was the same for his parents Carmel and Owen.  They had planned to travel to the US in May to take in John’s graduation as well as the first stages of the NCAA championships.  While the pair hope to get to Kentucky this year travel restrictions and public health advice will determine if they’ll get to see John stateside.  Murphy is very aware of their support and hopes that they’ll be able to travel in April or May.  “My parents have done so much for me and it’s nice to have them with me every step of the way” said John.  “Again, at the moment there is so much uncertainty so who knows when they get to see me play again, but hopefully it won’t be too long.  Sure they have so much time on their hands now they could give golf a go themselves and try join the seniors tour or something.”

Murphy is now firmly focused on the spring season.  This will definitely be his last stint in college golf so he’s determined to make the most of it.  The Cardinals had a busy spring schedule and this week they got a late call up to another tournament in Los Angeles.  Covid is still having an impact on sports across the world and college golf is no different.  But Murphy is focusing on the present, a solid start should guarantee him a place in the NCAA national finals, and he’ll also he hoping that his Louisville team will also make the finals.  “This semester is going to be packed and there is hopefully a lot to look forward to. However, a mistake I have made in the past is looking at the big picture too early and not focusing on what I have to do in the moment to give myself the best possible results. Staying present is something I have worked a lot on and something that I will continue to work on.”

The big question that always seems to come up is if and when John is turning pro.  In normal times it’s likely that he would have turned pro at some stage last year after completing his senior college season.  While the golf tours are still not back to normal, there is an expectation that the summer should see a return of elite amateur and professional events, giving John a few options.  “As we all know, it’s a mad world we live in and anything can change at any given second.  I think I have decided with my family and coaches that I’m very proud of what I have achieved throughout my amateur career, and I feel as though my game is at a stage where I am confident that it will translate to professional golf pretty well.  As I said, a lot can change and I’m still young, but I certainly feel ready to take the next step and turn professional, and I think that time will come at some point this year.  As I mentioned before, all I can focus on is the next shot I am going to hit, and in the end of the day, if the golf is good enough then that will take care of everything.”