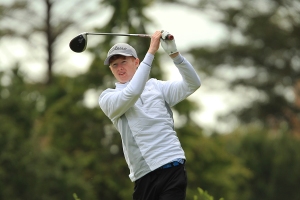 Kinsale’s Robbie Walsh who will head to Tennessee next year. Pic: Niall O’Shea

Kinsale’s Robbie Walsh is the latest Cork golfer to commit to the US college system, he recently signed with the University of Tennessee in Chattanooga and is set to start with the NCAA Division 1 college in 2022.  Walsh was delighted to announce his plans last week, realising a dream to advance his golf with a leading Division One NCAA college.  “I always wanted to go on a scholarship to the US but I started thinking seriously about it 18 months ago” explained Walsh.  “I have family there and I’ve been there on numerous occasions and I love the country.  Originally when it became a strong possibility that I would be going I spoke at length with Aaron O’Callaghan. He gave some great insights regarding programmes, weather, divisions etc. I also spoke with two friends of mine John Murphy and Mark Healy who are over in America.  I play regularly with them at home and they have hugely improved since they went over there.”

O’Callaghan is currently a coach with Wake Forest in North Carolina.  The Douglas native is a product of the US college golf system himself having spent four years at South Eastern Louisiana.  He went on to become a PGA Professional working out of Baton Rouge before starting his college coaching career with Louisville.  He has had a hand in more than of couple of Irish golfers heading to the NCAA with Kilkenny’s Mark Power currently on the Wake Forest roster.  Currently there are five Cork golfers in the US, a testament to the junior golf programmes in many clubs all over the county.  Walsh was one of the second generation of Kinsale golfers to make headlines at provincial and national level.  Following the successes of Cathal Butler, John Murphy and Gary Ward, it was clear to see that the clubs junior porgramme was working.  In 2018 Robbie along with his younger brother James were part of the Kinsale Jimmy Bruen team that won the Munster and All Ireland finals of the Jimmy Bruen Shield.  In 2019 he won the Connacht Boys along with gaining selection for the Irish Boys panel. 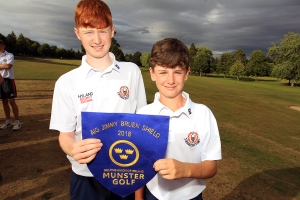 Walsh looks comfortable on the golf course and it’s no wonder considering he’s had a club in his hand for the best part of 13 or 14 years.  “My Dad played a lot of golf when he was younger, he played all the provincial tournaments and was selected on the Munster team.  He got me into the game, we started playing pitch and putt when I was four or five and he didn’t take me to the golf course until I was very tidy around the greens.  I played all sports growing up including soccer for Lakewood and hurling and football for Ballincollig but I eventually decided to focus on golf.  Over the past few years Ian Stafford, Michael Collins and Neil Manchip have all helped with my progression.  I have also been working with Peter O’ Keeffe for my strength and conditioning.”

While Walsh had several options available to him, after a couple of calls with the head coach he settled on Tennessee.  “I spoke with several colleges but UTC stood out for me. There are two other Irish people over there who I spoke with.  Paul Conroy on the mens team and Rachel Thompson who is on the womens team and they both could not speak highly enough about the college.  The weather was also an attraction, having the chance to play and practice in perfect weather conditions all year around is not something that is possible over here. UTC also have excellent facilities on campus (everything that you would ever want).  To have the opportunity to play Division 1 golf and play against the top players in America is massive, most players on the PGA tour have gone through the college system.  I had numerous calls with Coach Mark Guhne and we got on very well.  He seemed very optimistic about the team and has a great knowledge of the game having coached a US Amateur champion and tour players so I am looking forward to playing under him.”

While he has exciting plans for next year, Walsh also had a few plans for this year and the most pressing one at the moment is the leaving cert.  With UTC scheduled for August 2022, Walsh is looking at spending a year in college in Ireland before heading off, and he’s looking at following a business related route before joining the NCAA system.

Following the interruptions of last year, Walsh is looking forward to the 2021 season starting in Ireland  He now finds himself overage for the boys competitions so he’s into senior mens golf for the year ahead.  He can look back on his time in Junior golf with pride, a major provincial title and a national Buren medal are among the big wins and it’s the win in Oughterard that tops the list for Walsh.  “My highlights over the past few years were making the Munster and Irish boys teams and the standout moment for me was winning the Connacht Boys in 2019.  I played in the championships all the way up and always had the target of winning one.   “Once the Leaving Cert is over I plan to play a busy Summer schedule of tournaments (covid permitting) so I am looking forward to competing in all the senior tournaments around the country.  Lately I have been very busy with school but I have a net out in the back garden to work on some technical things in my swing and I have been doing some putting in the house on addition to the strength and conditioning work.”