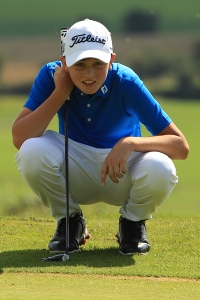 Fionn Hickey carded a second successive 76 to drop back to a tie for third, although the Muskerry golfer is now eight shots off the lead.  Seapoint’s Dylan Keating was dialled in today, shooting a very impressive 65 to take the lead.  With the wind and rain gone, Ballybunion’s Cashen course was a fair test for the field today, and Keating delivered.  He was four under at the halyway stage, thanks to birdies on the first and eight, and an eagle  on the 9th to go out in 33 strokes.  He dropped a shot on the END_OF_DOCUMENT_TOKEN_TO_BE_REPLACED 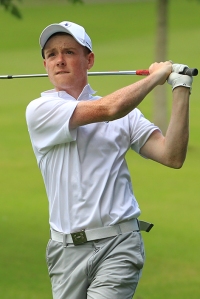 Round two gets underway tomorrow morning at 7.54am on the Cashen course, and with better conditions forecast the race will be on to post a score in top 45.  That’s the cut mark for Friday’s final round.  The cut is currently +18, but th END_OF_DOCUMENT_TOKEN_TO_BE_REPLACED 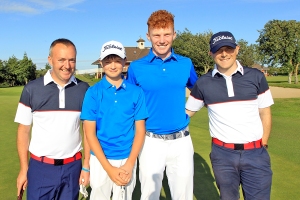 There was great excitement in Kinsale on Thursday for the fourth staging of the annual Pro Shop Challenge. This year’s charity match was titled the “Internationals v Professionals, as Kinsale’s two Irish Internationals John Murphy and Eoghan Cassidy took on Kinsale’s PGA Professionals Ger Broderick and Ian Stafford.  Murphy has been a senior international for two years while Cassidy picked up his first international cap at under 14 level this year.  There was a special guest there on the day, the Mullingar scratch cup was in the pro shop, that was thanks to John Murphy’s win a week before in the famous Leinster tournament.  As play got underway it was the Professionals who took the lead, thanks to a birdie from Stafford on the first.  Cassidy levelled the match on the 5th with a tap in birdie after a perfect approach shot. 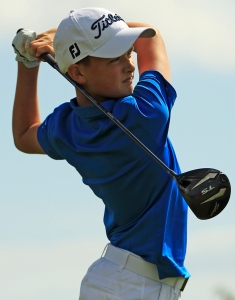 John Murphy was impressed with his new partner, it was the first time they played together in a competition.  “Eoghan was so impressive, he drove the ball like a professional” said the college Senior.  “He’s a class act and has huge things in store for him.  I really enjoyed watching him learn and gain experience in front of a large crowd, it was an opportunity I could only have dreamed of when I was his age.”  There was a hint of green keepers revenge on the course for the event, tight fairways and lightning fast greens challenged all four golfers as they put on a show for the large gallery.  The course in Farrangalway was in excellent condition, the new changes to the 9th, 17th and 18th have bedded in and there was scarcely a blade of grass out of place on the championship course.  The birdies were a little bit scarcer than usual, but the banter between the players entertained everyone, with referee Gerry Waldron keeping END_OF_DOCUMENT_TOKEN_TO_BE_REPLACED 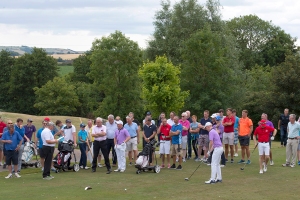 There’s less than a week to go to Kinsale’s Pro Shop Challenge is back, the fourth staging of the annual charity fundraiser.  And there’s a change this year with Kinsale’s two amateur internationals taking on the Pro’s.  The Kinsale Pro team remains the same, Ger Broderick and Ian Stafford are currently in training in the hope of winning back the title they lost last year.  The line up on the other side has changed though, the amateurs are now restyled as the “internationals” with 14 year old Eoghan Cassidy teaming up with senior Irish international John Murphy.  Murphy is currently on the senior Irish team while Cassidy is on both the Irish Under 14 and Under 16 squads.  The event takes place next Thursday, and there should be a great afternoon of golf and fun.  “The event itself is a fourball betterball match between Ger and myself and John Eoghan” explained END_OF_DOCUMENT_TOKEN_TO_BE_REPLACED 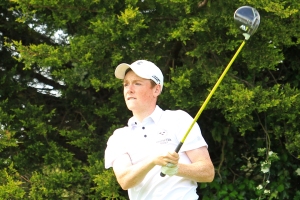 Pictures from the presentation: END_OF_DOCUMENT_TOKEN_TO_BE_REPLACED 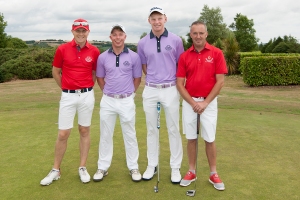 Kinsale’s Pro Shop Challenge is back, and the fourth staging of the charity fundraiser is set for a change with the pro’s taking on the internationals in August.  The Kinsale Pro team remains the same, Ger Broderick and Ian Stafford are currently in training in the hope of winning back the title they lost last year.  The line up on the other side has changed though, the amateurs are now restyled as the “internationals” and it also features a change in the line up.  14 year old Eoghan Cassidy will line up with John Murphy.  Murphy is currently on the senior Irish team while Cassidy is on the Irish Under 14 and Under 16 squads.  The event takes place on Thursday 15th August, and there should be a great afternoon of golf and fun.  Ian Stafford has been the driving force behind the event, from a small start in 2016, the event has raised well over €11,000 for the charity partners.  Keen to keep the event moving, Ian proposed a change to the format this year.  “This year we are celebrating the fact that Kinsale Golf Club has had 2 International Golfers in the past twelve END_OF_DOCUMENT_TOKEN_TO_BE_REPLACED

Pictures from the prize-giving in Lahinch: END_OF_DOCUMENT_TOKEN_TO_BE_REPLACED 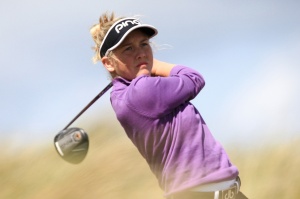 Sara Byrne and Valerie Clancy have made it through to the matchplay stage of the Girls Amateur Open in Ardglass.  Byrne continued her good form on Tuesday with an opening 71 that saw her finish the first round in 6th place.  She finished the second round tied for 12th place, a second round 75 in more testing conditions was more than enough to see her through, although she did describe it as “hanging on”. Valerie Clancy also made it through in the top half of the draw, steady rounds of 73 and 76 saw her finish tied for 19th place from the field of 140 golfers.  Ireland will be well represented in the matchplay with a total of seven golfers qualifying.  The first two rounds take place today.

Fionn Hickey (Muskerry), Jack O’Donoghue (Bandon) and Ross Higgins (Douglas) have all mande it through to the matchplay stage of the Kerry Boys Championship. Hickey finished third in the qualifier after rounds of 73 & 79, and he’ll face Ross Higgins in the first round.  Jack O’Donoghue will face Glasson’s Conor Gleeson who was the top qualifier on -3.  Cork is well represented in the plate with six END_OF_DOCUMENT_TOKEN_TO_BE_REPLACED