Kinsale native Shane Fitzsimons is one of a handful of spectators from Ireland in Seminole this week, and the US based golfer is savouring every bit of the Walker Cup experience.  He followed John Murphy for 35 holes yesterday, watching his neighbour play some unbelievable golf as he won his foursomes match and narrowly lost his singles match.

“John and Mark’s comeback in the foursomes was incredible and John almost pulled it off again in the singles.  Even after having an insurmountable task he was sensational on the back 9.  Hammer was 4 under after 9, I’m not sure there was better golf that that yesterday.  There was some great shots, his tee shot on 13, trading birdies on 15, bunker shot on 16 and his putt had a 90 degree break on it.”

The course is being compared to Augusta, hard fairways, fast greens and tricky slopes are making the golf exciting:  “The course is magnificent, the greens are hard and fast, and you’re not seeing the elevations on the tee.  Pin placement as tough as you would see anywhere, the course was set up for par to be a good score.”

“There’s a small crowd, just 1,500 spectators but the Irish find each other.  Eoghan O’Connell is here, Paul Buckley, Gerry McIlroy a few Irish based in Florida.  John and Mark’s coaches from Louisville and Wake Forest also made the trip.  It’s like being at a match when golf started, no ropes, walking the fairways with the players.  The atmosphere is subdued with a little clapping for a good shot.  It’s unlike any golf event I have been at, and I can’t imagine there will be another one like is as we come out of Covid.”

Shane was back on the course today supporting the Irish pair as they clocked up another win, and he’s sure to be on the first tee again for the singles as John Murphy takes on Ricky Castillo.

John Murphy and Mark Power came from behind to win the first point for GB&I this afternoon in the opening session of the Walker Cup.  Playing at a windy Seminole Golf Club on the Atlantic coast in Florida, the pair only took the lead on the 17th, and a measured two putt on the final green saw the pair claim the point in the morning foursomes.  The two Irish players were paired together, while it was expected both teams were hit by illness earlier in the week and it was unclear who would be fit to play today.

Needless to day Murphy was still on a high when it came to his post round interview with the Golf Channel, and he explained how they dealt with the pressure of being three down on two occasions.  “I said to Mark both times we’re playing great, we’ve got to stick to what we’re doing.  We got a couple of bad breaks early on but lets not try and force anything, this is a golf course for mistakes and we’ll let them make the mistakes.  We stuck to our gameplan very well and stayed patient.”

Power too was delighted with the result and credited Murphy with some solid advice early in the round, “The old head here calmed me down today, he said just hit fairways and hit greens and we’ll wear these guys down.”  Playing a Walker Cup match with a fellow Irishman was a real treat for both Murphy & Power and the Kilkenny man did a great job of describing it.

“It’s amazing.  We were talking about it this week, we played Home Internationals together, played together when we were 15 and 16.  On the first tee we said we were just going to just going to enjoy today and embrace it.”

It was a day of comebacks for GB&I.  At one stage they were 4-0 down on the course but when the last match finished it was 2-2 on the scoreboard.

Both Irish golfers are back in action this evening in the opening singles.  Power is out second against Davis Thompson while Murphy has the anchor spot on the team and will face world No 18 Cole Hammer.  They tee off at 8.47pm (Irish time) with coverage continuing on Sky Sports and the Golf Channel.

Excitement is building in Kinsale as the golf club and the community look forward to watching John Murphy compete in the Walker Cup this weekend.  Murphy will become just the fifth Cork golfer to take part in the Walker Cup after the Kentucky based golfer was selected on the team last month.  Although many would have liked to travel to Seminole in Florida, not even his family or his coach were able to travel.  That didn’t stop the Officers of Kinsale Golf Club from celebrating closer to home.  The club unveiled a Walker Cup flag last Sunday, a nice gesture to connect the members with their star player in Florida.  Watch by John’s parents Owen and Carmel, his sister Faye raised the flag in front of the clubhouse, and next week the Walker Cup pin flags will feature on END_OF_DOCUMENT_TOKEN_TO_BE_REPLACED 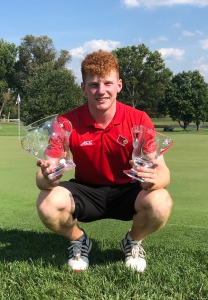 There were lots of celebrations in Kinsale last week when news emerged that John Murphy had been selected for the Walker Cup next month.  Murphy becomes just the fifth Cork golfer to make it to the Walker Cup.  Friends and family bombarded the 22 year old with messages of congratulations, he was one of just two Irish golfers to make the GB&I team which plays the US team in Florida next month.

Among those who were delighted with the news was Ian Stafford who has coached John since he started the game.  “I’m absolutely delighted for John, the run of form John has been on lately in a pressurised situation has shown how he has matured as a golfer and there is a great feeling of redemption in getting selected for the team in Seminole” said Stafford who has coached John for close to a decade.  “Although this is not the first time John will have represented GB&I it is the final and biggest box ticked in terms of amateur achievements and a testament to the hard and smart work John has put in.  The emotions we are feeling now are a million miles from what we felt two years ago driving away from Portmarnock after END_OF_DOCUMENT_TOKEN_TO_BE_REPLACED

Portrush, Augusta, and New York will all be on James Sugrue’s agenda over the next 12 months.  That’s part of his reward for winning the famous Amateur Championship in Portmarnock.  The 22 year old Mallow man created a piece history, becoming only the second Cork golfer to win the most famous prize in amateur golf.  As the winner he’ll play in the Open Championship in Portrush next month, he’ll play in the US Open in Winged Foot New Jersey next year, and the established tradition is that the Amateur Championship winner always receives an invitation to the Masters.  Watched by his parents Margaret and Mick, and sister Michelle and brother Edward, and hundreds of supporters and friends from Mallow, James calmly rolled END_OF_DOCUMENT_TOKEN_TO_BE_REPLACED

The R&A and the USGA announced the introduction of a new Local Rule that eliminates the penalty when a ball is accidentally moved on the putting green.  The Local Rule will be available for any committee in charge of a competition to use starting 1 January 2017. It will be adopted by The R&A and the USGA in all of their championships, qualifying competitions and international matches.

David Rickman, Executive Director – Governance at The R&A, said, “For the past several years, as part of The R&A and USGA’s Rules Modernisation initiative, we have considered the penalty for a ball END_OF_DOCUMENT_TOKEN_TO_BE_REPLACED

R&A, GUI and ILGU announce Level 2 Rules School to be held in October 2014
The Golfing Union of Ireland (GUI), the Irish Ladies’ Golf Union (ILGU) and The R&A are delighted to announce that for the first time, a joint GUI/ILGU/R&A Level 2 Rules School will be run in Ireland on Friday 10th, Saturday 11th and Sunday 12th October 2014.  The School will be facilitated by experienced and qualified instructors from The R&A, GUI, and ILGU. END_OF_DOCUMENT_TOKEN_TO_BE_REPLACED

Golf Rules Always to the Fore

Rory McIlroy hit the headlines over the weekend over his reaction to an incident regarding the rules of golf.  He suffered a two shot penalty for an incorrect drop, a penalty that ultimately had a big bearing on his second place finish.  McIlroy was penalised for standing on the boundary of an obstruction, in this case a spectator crossing point on the fairway.  Local PGA professional Padraig Dooley however had a different take and defended the rules of the game, many of which have endured over time.

Padraig from Drive Golf Performance has taken the PGA Advanced Rules and Refereeing course is well placed to give an opinion on the rules of golf.  He explained: “The requirement to take full relief from an immovable obstruction or abnormal ground conditions is far from stupid.  Both Rules 24 & 25 allow for relief from the conditions if it interferes with not only the ball but the stance and area of intended swing as well.  If there wasn’t a requirement to take full relief, the player by not taking full relief could drop and if not liking the lie could re-drop as many times as required to get a good lie as the player would always be entitled to relief.  This isn’t really a stupid rule.”  McIlroy had commented that “There are a lot of stupid rules in golf and this is one of them”.  While Dooley spends most of his time teaching, his is acutely aware of the importance of the rules and the influence they have in every game “all the rules of golf are well thought out and have a lot of history and cases behind them, none can be called stupid”.

While many golfers think that the Rules of Golf are complex, the Glanimre based teaching professional doesn’t agree; “A very good working knowledge of the rules doesn’t take too long to grasp.  There are 34 rules, it might take 15 minutes to get reacquainted with each of them.  An hour each evening in the winter months will mean it just takes over a week to get a great deal of the knowledge that will help every player.”  It should also be noted that the Rules of Golf booklet can be downloaded for free from the R&A website.

Working from their own extensive facility in Riverstown, Padraig and his brother John have built a large customer base in under two years.  In addition to lessons, also offer junior lessons, custom fitting and golf fitness programmes.  Padraig is a qualified junior golf and golf fitness coach, both qualifications coming from the renouned Titleist Performance Institute.  Padraig’s final bit of advice is “Why not grab a rule book while watching the TV and during the ad breaks, read a rule, you never know when it might save you a stroke or two.”