Almost 150 amateur golfers got a chance to tee it up with tour professionals yesterday as the Irish Open Pro-Am took place in Fota.  Play got underway at 7.50am and even at that stage the sun was out and temperatures were hitting 20 degrees.  The attendance at the pro-am was an estimated 7,000 spectators which ranks highly on the European Tour schedule.  The majority of places in the pro-am are reserved for the event sponsors but there were a few golfers that secured their place thanks to qualifying competitions. 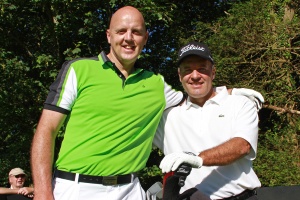 Shane O’Halloran was one of the lucky winners in the Fota pro-am open qualifier and he thoroughly enjoyed the day.  Playing alongside Leo Hassett and Gary Howard they were joined by six time European Tour winner Thomas Levet.  O’Halloran, a 5 handicapper is no stranger to the course as he’s a member in Fota but playing in European Tour conditions was a new high as he explained; “The condition of the course was outstanding, the fairways and greens are excellent but the rough is extremely tough.  The real highlight was playing with Thomas Levet though, he really made the day for us.  He was very chatty and helpful when it came to our golf.  He was also great with the spectators especially the kids.”  Levet was in great form and brought Leo Hassett’s two kids onto the fairway for the final hole, he even allowed seven year old Oisin to putt on the iconic 18th green.  As for the tournament scoring, O’Halloran thinks there could be a few low scores over the weekend; “If guys can stay on the fairways and keep out of the rough then there’s a good score out there.” 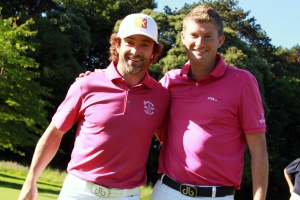 Danny Brassil from the Old Head was delighted with the experience; “It was a super day, from start to finish it was a great experience.  The course is in spectacular condition and the greens are just superb.  We played with Simon Khan and he was great company.  He chatted all the way around and made us feel very comfortable.”  Brassil is also a soccer fan was also delighted to play with Republic of Ireland player Stephen Hunt.  Footballer Hunt made the most of the day too, the 12 handicapper helped his side with back to back birdies on the 13th and 14th.  He too was quick to praise the event; “It was my first time playing a top class course that was ready to go for a tour event.  The place was in great nick and Simon Kahn was great company so I’d like to see him do well over the weekend.”  Danny’s team went on to win the morning competition making it a day to remember for the amateurs. 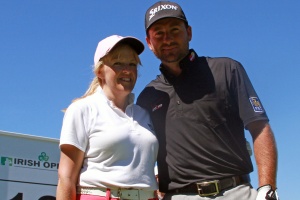 There were a number of high profile amateurs in the field too, Rory McIlroy played with Dermot Desmond, Cork hurler Anthony Nash played with Waterford’s Kevin Phelan and the Ladies and Gents Captain’s and Presidents from Fota were out too.  It was a special day for Tom and Caroline Hennessy, Tom is the President and Caroline is the Lady Captain.  Tom plyed with Paul Casey in the afternoon while Caroline was out with Graeme McDowell in the morning.  Caroline admitted to have some nerves before the off; “I was very nervous but once you’re out there and hit the first ball it’s grand.  Playing with Graeme McDowell was great, he put us at ease and gave us a few tips as we went around.”

Fota’s Head of Marketing Seamus Leahy played in the afternoon slot and he was delighted to get out from the office and soak up some of the atmosphere; “We’ve been working hard over the past six months on bringing the Irish Open to Fota so it’s great that it’s finally here.  It’s a real treat to get out on the course and see the course first hand from the player’s viewpoint.  We played with the defending champion Paul Casey and he was in great form.  The feedback from the pro’s is that the course is in great shape and that’s great to hear.” Casey too seemed to enjoy his round and even though he was out last in the afternoon took plenty of time to speak with the volunteers and the spectators.