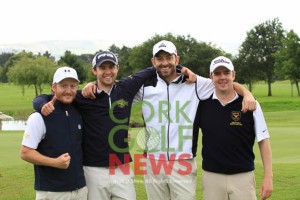 Muskerry’s Barton Shield team completed phase two of their plan to match last year’s heroics, after winning the competitive South Munster qualifiers, they went on and secured a second successive Munster title last Saturday in Dungarvan.  Now they face a trip back to Carton House next month for the finals of the AIG Cups and Shields, and they have a great chance of retaining the national title.  The experienced side have one change from last year, Shane Whooley has filled the spot held by John Waldron and has slotted into the seamlessly going on his recent performances.  On Saturday morning they faced Youghal in an all Cork clash.  Youghal had come through the East Munster qualifier, and despite Conor Coyne leading the team they couldn’t keep pace with Muskerry and lost by five holes.  Shannon came through on the other side of the draw with an impressive eight hole win over Tralee.  The final was set to be a battle and it was the first of three Munster finals to be decided on Dungarvan’s 18th green.  The match started as a very evenly

As it happened Muskerry were to produce another clutch performance as they went on to win the three remaining holes.  Niall Gorey and David O’Donovan dove-tailed well on the 18th.  O’Donovan had a great drive and Gorey made the par five green with an excellent long range iron over the water.  O’Donovan narrowly missed the 9 foot putt but Gorey made no mistake with the putt back for birdie.  Shannon could only manage a par and the Muskerry win made final result all square.  At the same time Shane Whooley and Dan Hallissey went one up on the 17th with a great long range birdie.  Now one up in their match, and one up overall, their strategy on the 18th was different to the first pair.  Whooley put a great ball out the middle and after Shannon put their second shot out of bounds, Hallissey laid up.  Whooley calmly chipped to three feet, leaving with his partner with the easiest of finishes.  There were great celebrations on the 18th green from the players, management and a large number of supporters who had travelled to watch their team.  Accepting the Munster Pennant, Muskerry team manager Greg O’Sullivan thanked every associated with the win the players, caddies, supporters, and especially the Club Officers for all their support during the year.  Muskerry now take the familiar path to Carton House for a national semi-final match in the second week of September.

The Senior Cup finals also took place on Saturday and Monkstown came very close to winning a Munster title.  They came through a tough semi-final against a talented Tramore team, but only after the match went to two additional tie holes.  Monkstown’s Sean Desmond needed a huge birdie on the 19th to stay in the match, and he had an even bigger birdie putt on the 20th to win the game and put Monkstown through to the final against Limerick.  Monkstown were easily the best supported Cork club in Dungarvan and a huge roar went up  The final was equally dramatic, and was only settled on the 18th green with the Cork side losing the odd match in five.  Limerick’s win bridged a ten year gap and they will be hoping to claim national honours next month.