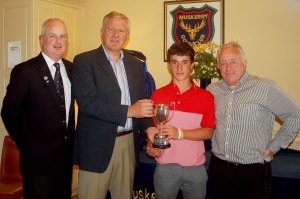 Monkstown’s Sean Desmond won the Bruen Youths in Muskerry on Monday, rounding off an impressive year for the scratch golfer.  Desmond was a key part of Monkstown Senior Cup team this season and the impressive young golfer has had a share of disappointments in the last few weeks.  He was part of two Monkstown teams that narrowly lost out in Munster finals in the AIG Senior Cup and in the Junior Foursomes.  He also had a good run in the Kerry Boys in Ballybunion before going out at the semi-final stage.  On Monday he led a field of fifty golfers to win the prestigious youths title which has taken place for each of the past 30 years.   In the morning he led the first round with a level par 71, tied with Muskerry’s James O’Connor.  Birdies on the 1st, 7th and 9th helped Desmond build his score.  Three more birdies followed in the second round, all on the front nine again.  A double bogey on the 13th in the afternoon was the only real blemish on a very solid 36 holes.  His two round total of 144 was one shot better than Daniel O’Sullivan from Douglas.  O’Sullivan was the only player to break par, he shot a 70 in the afternoon round.  Blarney’s Alan O’Riordan and James O’Connor from the home club were also tied on 145, with John Boylan (Douglas) taking 5th place.

The Bruen Youths competition started in 1986 to commemorate the 50th Anniversary of Jimmy Bruen winning the British Boys Championships at the age of 16.  The winner’s trophy is the actual cup which Jimmy Bruen won in winning the Captains Prize in Muskerry in 1946.  It was fitting that Jimmy’s son David presented the prizes to the winners.  Muskerry’s link with Jimmy Bruen is still very strong and David Bruen recently presented back to the club the watch which the club presented to Jimmy to mark his winning of the British Boys in 1936.

Mallow were very unlucky not to advance to the Fred Daly national final on Tuesday.  They were beaten by beaten finalists Tandragee in their semi-final.  Although the Armagh club took out an early lead, the Mallow boys battled all the way.  One match was on the 20th before Tandragee won the fourth point to advance to the final.  A large crowd supported the Mallow boys and all had hopes of a dramatic win, like the one in Gold Coast when they beat Kinsale.  Unfortunately for the players and supporters it wasn’t to be and the faced into a long journey home from Moyola Park.

Mark Shanahan will be looking to capture his fourth title, the Castlemartyr member has won the event four times in five years and last year he overpowered a quality field with rounds of 67 and 70 to finish on -7.  With new sponsors Amarenco on board the event is again sure to attract a top class field with a sizeable prize und in place.  The Castlemartyr Senior Scratch Cup has traditionally been the last major event of the year, and it has consistently attracted a top class field from all over the country.  The field will be limited to the top 66 golfers and bookings can be made through Brady in the Pro Shop at Castlemartyr.