2015 started with the sad news of the closure of Frankfield Golf Course.  The nine hole track existed on an elevates site on the southside of the city for over 30 years since Mick Ryan Snr laid out the course.  It must have been an emotive decision for the Ryan family, especially given that they live and work onsite.  The Ryan’s retained the very busy driving range and announced plans to extend and develop the practice facilities.  While there were many disappointed members, they all had several options to continue their golf with every other Cork club offering membership options.  PGA Professionals David Whyte and Michael Ryan are both based at the city venue and it proved to be a busy place throughout 2015.

On the course, the Munster PGA were one of the few groups to be playing competitive golf.  David Ryan used local knowledge to win the Wilson sponsored competition in Cork Golf Club.  He shot a three under par round to finish ahead of popular Bandon veteran Paddy O’Boyle.  PGA Captain Liam Burns took the over 45’s prize.

February saw the start of the battle for member as many clubs saw an improvement in the demand for membership.  After five tough years clubs were ready for the upturn, with clubs like Fernhill, Cobh and Lisselan offering great value in terms of joining offers.  Skibbereen launched a “pay as you go” membership option.  For €175 you could join the club and have access to the three rounds necessary to secure or retain a handicap.  After the initial three rounds, members could play for just €10 per round.  Skibbereen also ran a successful ladies “Get into Golf programme”.  This was a CGI initiative and again was a positive development for the West Cork club.

David Ryan notched up his second win in the Munster PGA winter series, but the plaudits went to veteran Liam Higgins who shot a one under par 71 in Youghal.  The popular professional beat his age by one stroke and finished in second place just one shot behind Ryan.  The popular Waterville patriarch is still very active, playing golf in his home course and in neighbouring Dooks several times a week.

The golfing season finally got underway in earnest as most clubs commenced their qualifying competitions.  The first big one of the year was the Fota Island Senior Scratch Cup, and the winner was Muskerry’s Ronan Twomey.  Scoring was tough on the championship course at Fota, the blue tees were in use and several tricky pin positions challenged to top class field of over 120 golfers.  Twomey along with Mallow’s Paul McCarthy led the field with scores one over 72 at the Irish Open host venue, with the Muskerry man winning on the countback.  For McCarthy it was the first step in a great start to the season for the Mallow golfer. 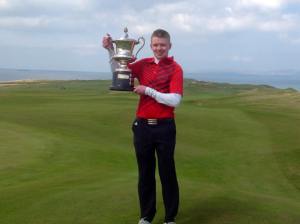 The Munster PGA moved onto Waterville for their PGB Winter Series pro-am.  A large number of entries were received and while the weather was poor, everyone enjoyed the classic Kerry links, it was Frankfield’s David Whyte who came out on top.  Whyte was tied on 73 by Killarney’s Danny Sugrue, as the Kerry man jumped to the top of the order of merit.  Home professional David Higgins was partnered by his nephew Liam who contributed seven birdies on their way to a winning score of 63.