Gary O’Flaherty pictured during the Munster Strokeplay at Cork Golf Club in May. Picture: Niall O’Shea

It’s been 20 years since Gary O’Flaherty made his debut on the Munster Inter-provincial team and the Cork Golf Club member is really looking forward to the 2016 event in Fota Island next week.  O’Flaherty won on that original outing in Mount Juliet and has been on five winning teams.  In that time the Munster and Irish golfer has won numerous individual and team titles but he is still very fond of the interpro’s and has some great memories.  “There are so many good ones” said O’Flaherty. “being 4 down after 9 holes in foursomes against Rory McIlroy & Johnny Caldwell in Ballyliffin in 2006 is probably the best.  Myself and Pat Murray managed to reel off five birdies to go one up, only to be pegged back on 16 where McIlroy holed from 40ft for an eagle.  We halved the match in the end.”  Golf has moved on a lot, even in the ten years since Ballyliffin, and many top amateurs are now effectively full time with easy access to all the Irish and International championships.  The senior interpro’s remain an important part of the Irish golfing calendar and Gary still sees the competition as one of the most important in the year: “I believe it’s very important.  It gives guys a goal at the start of the season.  Not everyone can make Irish teams and compete in championships every week, so it’s great to be able to compete against the best for a few days.  It also gives selectors a chance to see how guys are in a team environment, as well as playing foursomes together.”  Gary is also a big fan of Munster Captain Phil Cooney who has helped deliver two titles for Munster in the past four years.  He’s also a fan of the team spirit that Phil promotes: “I think so, it’s very important to have a good team atmosphere. Any year we have won, the crack and team spirit has been fantastic!  Phil’s man management is second to none.  He lets you do what you need to do, and is there to help when needed.”

Gary has had a great run of form in the past three months.  After narrowly losing out in a play-off at the Munster Strokeplay, he went on to win the Castletroy Scratch Cup and the Irish Mid-Am title, breaking the course record at Limerick with a 64.  As well as playing at an elite level, Gary also works full time in the industry, and recently moved jobs to become the Sales Manager Ireland for Cobra Puma Golf.  Gary is excited about the new challenge of working with one of golf’s newest worldwide club and apparel companies: “Cobra are number four in metal wood market share, and puma golf footwear is up 30%.  The brand is looking to grow business in Ireland as well as capturing young talent in the world of golf, like signing Bryson de Chambeau recently.”  Although he’s only with Cobra and Puma for a short time, O’Flaherty brings over a decade of experience of working in the industry.  And already he’s up to speed on the key reasons why the brands are among the fastest growing in the Irish market.  “Puma’s growth is no surprise really, being such a huge brand” said the Sales Manager with responsibility for all of Ireland.  “They are just using the knowledge they have from making leisure and sports shoes for so many years.  Using state of the art materials such as IGNITE foam, Puma have created a super lightweight shoe with strength, durability and increased flexibility.  The new styles are appealing to all ages and affordable too. Having tour players like Ricky Fowler wearing the shoe and doing so well every year, really helps promote the brand.  Cobra is among the fastest growing golf club brands in the industry, experiencing significant market share increase within its metal woods and irons category.  Cobra’s mission is to make the game more enjoyable for golfers by offering quality performance and innovative technology-based products at a fair price.  Cobra products are designed for the ‘average, avid’ golfer, with performance goals of distance, greater accuracy and forgiveness.” 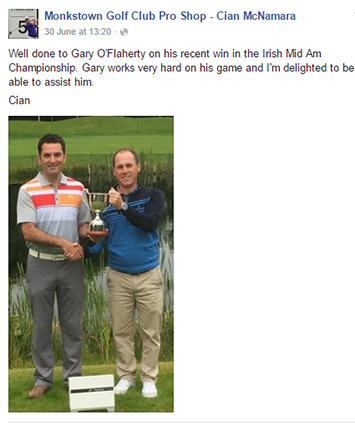 As well as changing jobs, Gary changed coach recently and has been working with Cian McNamara.  The Monkstown head professional was on the winning 2007 team with Gary and the new partnership has already yielded two big wins including a national title.  “Cian has been great” said Gary, “he has helped me understand my swing better, and identified areas that need improvement.  I’m not working harder, just focusing more on what needs to be corrected.  It’s more quality practice now, rather than quantity, hitting hundreds of balls just bores me.  He has really improved my putting, which is such a major part of golf.  I tend to neglect my putting fundamentals, and Cian has really identified what I need to remember to do, in order to set myself up to put well.”

2007 was a bit of a breakthrough for Munster under Captain John Carroll.  Munster had been without a win for 10 years, and that was the third of Gary O’Flaherty’s five wins.  Limerick’s Pat Murray was also on that team, as was a young Peter O’Keeffe.  The team also featured current US Tour player Seamus Power and Monkstown PGA Professional Cian McNamara.  Munster came very close to retaining the title in 2008 in Athlone, but were beaten by a top class Leinster side.  It took another five years to win the title back but Munster have been very strong for the past four years.  Munster Captain Phil Cooney has had a great record in his four years at the helm, never finishing outside the top two.

Phil will be hoping that his four year results pattern continues.  He won in Royal County Down in his first year as Captain, and Munster were second a year later when the competition was held in Lee Valley.  Another win followed in the Island Golf Club in 2014, and Munster were again runners-up in Rosapenna last year.  Prior to the 2012 win, Munster had only one win in the previous 14 years.  Given the relative depth of both Ulster and Leinster over the past decade, Munster have performed very well – on paper at least starting each year as underdogs.  With a strong team and home course advantage, hopes will be high this year that Munster will add to their 12 titles.