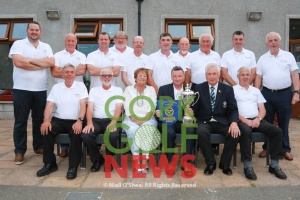 East Cork continued it’s long tradition of hosting Munster Golf events on Saturday but this time it was more special as the competition was in memory of former East Cork Member and Munster Golf Chairman Michael Cashman.  The All Ireland Club Fourball is a new competition and the Munster competition was named the Michael Cashman Munster Club Fourball.  The final took place in East Cork on Saturday with two Tipperary teams contesting the final.  Slievenamon, who were appearing in their first ever Munster final, had a great with over Nenagh who have had several successes already this year.  Slievenamon won the first game on the 11th green when Anthony Daly and Noel Casey won their match and Colin Allen and Trevor Gough added a second point soon after with a 7&6 win.  Trevor Melbourne and William Phelan won the third and decisive point for Slievenamon in the second match, giving the Tipperary their first Munster title.

In addition to a large turnout from East Cork Golf Club, the Cashman family were present including Michael’s wife Margaret.  Munster Golf Chairman John Moloughney was delighted to get the opportunity to remember his friend of over 30 years.  “We’re here for a very special reason, the first playing of the Michael Cashman trophy, which was kindly donated by East Cork Golf Club.  It’s only fitting that the presentation takes place here in East Cork, and it’s a fitting memory to one of my great colleagues in golf.  It didn’t take much persuasion for the Branch to name the new competition in honour of Michael, we’re very happy that the Cashman are here with us.  I’m involved with Munster Golf for 30 years and Micheal was there before I even started.  One of the great things I remember about Michael was his great aptitude to listen to everyone, everybody seemed to ring Michael if they had a problem, whether it was 8 in the morning or 8 at night, or maybe even 12 at night.  Michael always managed to listed and to be helpful and I suppose that’s what we try to do as Officers of the Golfing Union and as members who represent the Union on behalf of golf.  It’s seldom a day goes by for one reason or another that I don’t remember Michael’s work that he did on by half of the union and the sport.” 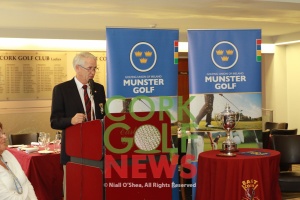 East Cork Captain John Morrison was also proud to speak of the great legacy left by Michael Cashman: “When Liam Harkin who was a great friend of Mick’s, suggested that the Munster part of the competition be played in Michael’s honour East Cork were proud and honoured to donate the cup to the Munster Branch.  Michael was a proud member of East Cork and a longstanding member of the Munster Branch.  I think everyone agrees that it’s a magnificent trophy.  When speaking to anyone about Michael the consensus is that he was straight talking, fair and honest in his dealings with you, and if something had to be said or done, he said it or did it.  More importantly if he could help you in any way he would and I think that is a great legacy to leave behind.  It was fitting too that as Michael was Tipp man, two Tipperary teams reached the final.”  John also thanked Claire Moloney for making the course available and everyone associated with East Cork for a great day.

Slievenamon now go on to contest the national finals of the All-Ireland Club Fourball.