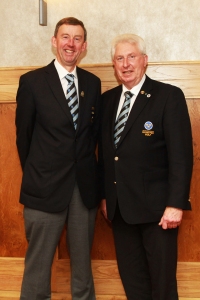 Jim Long from Monkstown is the new Chairman of Munster Golf following his election at the Munster Branch Annual Delegates Meeting on Tuesday night.  The Hibernian Hotel in Mallow was again the venue and over 300 delegates from all 85 Munster golf clubs packed in for the meeting, where the key event was the election of a new Chairman.  For the first time in over 20 years there was a three-way election with Muskerry’s Liam Harkin and Castleisland’s Michael Lawlor also on the ballot.  Although both Long and Harkin were outgoing Officers of the branch, it was the Monkstown man who won.  Jim Long was the Honorary Secretary of the Munster Branch and also held the position of Junior Convenor at national level.  After his election Long was clearly delighted with the result: “I’d like to thank all the delegates and I’m delighted with the honour to have been elected Chairman.  I hope to do my best to work for Munster club and to emulate the achievements of the previous Chairmen of the Branch.”  Barry Lynch from Raffeen Creek was elected as Honorary Secretary of the Branch while Cork’s Dave Prendergast was elected as the Honorary Match & Handicapping Secretary.  Macroom’s Jim Nolan was elected onto the seventeen-man provincial council, he joins Phil Cooney, John Carroll, Gordon Adair, Tom Donnelly, Jim Lyne and Sean O’Leary who were all re-elected.  The meeting also validated John Moloughney’s proposal as President Elect of the Golfing Union of Ireland, John will be formally nominated at the Union’s AGM in February.  Moloughney has served as Munster Chairman for the past four years and prior to holding the role of Chairman he had spent a total of 24 years on the Munster Council.  All of the Officers reports were accepted including the Treasurers report which indicated a welcome increase in the number of adult golfers.  Although the increase was just over 1%, it marks a welcome return to growth in the sport which as seen a reduction in numbers for each of the past seven years.

Treasurer Peter English did report on a deficit for the year totalling €25,000 which was in line with expectations.  The year ahead should more positive given the increase in the provincial levy which was voted in last year.  In his final report as Match & Handicapping Secretary Liam Harkin raised the thorny issue of handicaps.  He reported that the handicap oriented Cups and Shields events once again highlighted the way some clubs use the system to produce teams who play to a standard far better than the figures.  He reported that the handicap committee have electronically monitored a number of clubs and have also carried out audits.  Advisory visits took place with positive action by some of the clubs and he reported that the process is ongoing and results will be made available when completed. 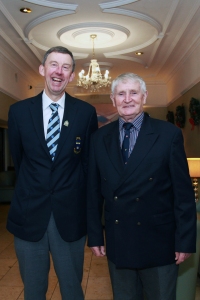 Jim Long with John O’Reilly, the only other Monkstown member to be Chairman of Munster Golf

Gordon Campbell, Club Support Officer representing the Confederation of Golf in Ireland gave a comprehensive update on the first phase of the Confederation’s Development Plan and outlined proposals for phase two of the Plan.  Gordon has carried out several club visits over the past 14 months and has also facilitated the golf networking seminars in Douglas and Charleville.  Another seminar is planned for Cork Golf Club in mid-December and this is already sold out.  Videos were played from the Golfing Union of Ireland highlighting the developments that took place in 2016 and also looking at the One Governing Body project.  As usual the issue of handicaps was raised through a notice of motion, although the meeting firmly rejected Donabate’s motion to increase the handicap increase limit from one shot to two shots.  A similar motion from Co Armagh was also defeated.  Killarney’s motion to compel clubs to enter the Fred Daly Plate competition was carried by a large majority.  The motion was put before the meeting to rule out ambiguity in the current rules where clubs could enter the plate competition only.  The amendment means that all clubs will now have at least two inter-club matches each year at under 18 level.  A number of the branch bye laws were amended, some technical changes were made and some practical changes included meeting notifications.