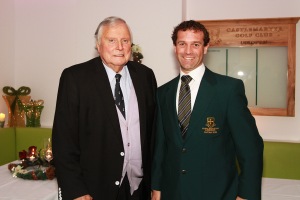 Golf Legend Peter Alliss fulfilled a long-standing obligation last week when he visited Castlemartyr Golf Club.  Late last year the famous BBC anchor was named honorary President of Castlemartyr, a title he also holds in Old Thorns Golf Club, Castlemartyr’s UK parent hotel.  Alliss had hoped to travel for the President’s Prize earlier this year but was unable to do so. And instead sent a video message to members.  On Friday evening he went one better, attending a member’s Q&A session which was moderated by RTE’s Greg Allen.  Greg who is an accomplished golfer himself was delighted to get the opportunity to join in the unique event.  At the start of the evening, the MC reminded everyone that in addition to an impressive career as a commentator, Peter started as a very successful tour pro, winning over 20 times at events in the UK and across Europe.  Now 85 years old, Alliss was in great form on the night, and almost 100 packed into the Pod for the members only event.  Peter gave full and frank answers to the questions which had been submitted by members.  In addition to giving everyone an idea of how professional golf was in the 50’s Alliss also gave everyone an insight into his own experiences and opinions.  Never afraid to express his real feelings, Peter was quick to let everyone know his thoughts on the pace of play and wasn’t slow in criticising the current tour professionals for the over-analysis of every shot.  Although he only managed a quick look of the inland links course, Peter seem to give it his seal of approval, commenting that “he’s designed something special here” referring to course designer Ron Kirby.  Aware of his audience, Peter referenced playing in Cork Golf Club, his memories of Jimmy Bruen and a small property investment in Glengarriff. 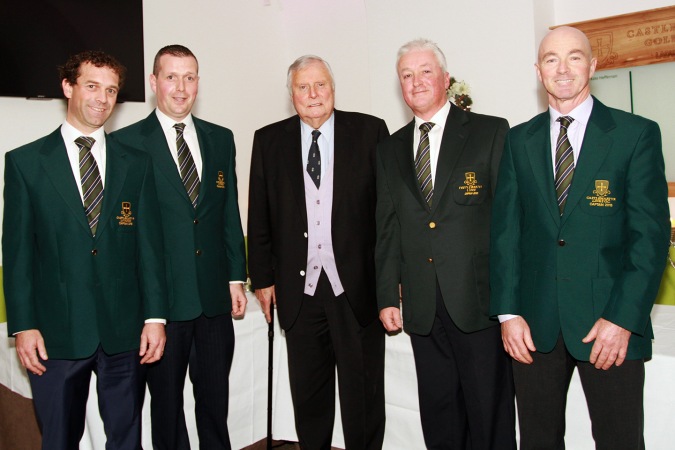 Castlemartyr Vice-President JP Twomey was taken by the way that Alliss held the room for well over an hour.  “The variety of stories and knowledge shared by Peter meant it was very special for our members” said Twomey who was Captain in 2014.  “I sat in awe looking at Peter in full flow in what seemed like I was at home in my own sitting room.  I never thought I would be so up close and personal in an environment with a golfing legend.  At one stage I looked around the packed room and could see everyone deeply engrossed in the World Golf Hall of Famer, eyes and mouths were wide open taking in all the information Peter had to offer.  From speaking to members afterwards this night with be remembered for a long, long time to come.” 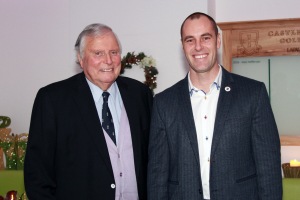 Castlemartyr’s PGA Professional Brady Sherwood has been at the resort from day one, and he was thrilled to be involved in the evening.  “It was a night that each member of Castlemartyr who were privileged enough to attend will remember forever” said the popular Australian who has worked in Ireland since 2007.  “To be able to interact with two amazing figures in golf and sport is something remarkable.  Mr Alliss was extremely impressed with the golf course, mainly in what a splendid job Ron Kirby had created saying ‘he really has designed something special here’.  The course has matured beautifully coming into our 10th season in 2017, the club is heading in a very positive direction and I am very fortunate to be a part of this unique story since the beginning.”  Sherwood has been the driving force behind the launch of the Castlemartyr Ladies club and the recent successful membership drive for the mens club.