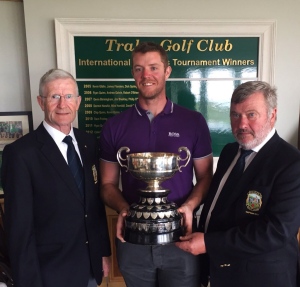 Peter O’Keeffe overcame a one shot deficit in the final nine holes in Tralee today to claim the prestigious Kerry Scratch Cup.  O’Keeffe was joint leader going into the final round but Tralee’s Fergal O’Sullivan led by one shot after 45 holes.  It was a tough day for the players in Tralee, O’Sullivan was +3 at the turn and O’Keeffe was +4 as high winds and squally rain did its best to wear down the competitors.

O’Keeffe had a tough start, he lost a ball out of bounds on the third, and frustratingly he could see the ball was less than a foot on the wrong side of the markers.  A triple bogey there was a setback but O’Keeffe parred the next nine holes to get back into contention.  He parred the difficult 12th hole to get back to a share of the lead and his only birdie of the day came on the 14th when he took the lead on his own.  It was a nervy finish for O’Keeffe over the final few holes on the Arnold Palmer designed links.  He needed to get up and down for par on the 15th to save par and a bogey on the 16th saw him tied again with O’Sullivan.

Another up and down for par was needed on the 17th, this time from 50 yards.  After 53 holes of testing golf, O’Keeffe and O’Sullivan were still tied for the lead.  O’Sullivan found the heavy rough on the 18th but found the ball and wedged out. He was left with a 30 foot putt for bogey on the green and the Tralee man nailed it.  O’Keeffe may have been forgiven if he thought he might have two attempts from six feet to win, but the unlikely long range putt from O’Sullivan meant he had to sink his six foot par putt.  The Douglas man made the par and won the competition by one shot.

12 months ago O’Keeffe finished fourth and today was another indication of the shift the Irish Amateur Open champion has made in his game.  “This was one I’ve been thinking about since last year said O’Keeffe, “I was the only one to break 80 in the final round last year and I knew I could do better this year.  It’s definitely one of the best events on the calendar, we’re very well looked after by the club and by the sponsors and I’m delighted now that I’ve won it.”  With three wins so far this season he’s had a great first half of the year.  It’s back to work this week for O’Keeffe, but next week he’s travelling to the British Amateur at Royal St George’s.  After that it will be on the the Interprovincials and the North of Ireland is third event in a packed calendar for the 35 year old.

John Murphy was the third player in the final group and although he was going well for most of the round, a couple of three putts on the closing hole frustrated the Kinsale man.  Despite the finish he did enough to claim 3rd place and he now heads for Newlands for the Leinster Students Championship.  Murphy will be keen to convert his current good form into a win as he looks to add the the Munster Students title he won earlier this year.  Cathal Butler shot the low round of the day, his 73 saw him finish in 6th place and he also won the gross prize for the third round.

The Kerry Scratch Cup was again sponsored by the Kerry Group and their continued support for the event has allowed the club to build the event into a top class experience for all of the participants.  The WAGR counting event is one of only two scratch cups in Munster to be played over three rounds.