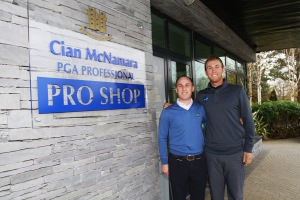 Monkstown’s Cian McNamara was tied second in today’s Irish PGA Championship Pro-Am in Moyvalley.  McNamara has been improving steadily in the early part of the season, last week he carded a final round 69 in the PGA Professional Championship to claim 6th place.  The event was held in Lutrellstown Castle which featured 150 PGA professionals from all over the UK and Ireland.

Today he followed up with another solid round in Moyvalley in the pro-am on the eve of the the 72 hole Irish PGA Championship.  The Limerick native was second, two shots off the lead set by David Higgins.

The form player on the Irish Region is David Higgins who already had six wins to his name, including a win in today’s pro-am.   Damien McGrane, who leads the 2017 Order of Merit, dominated the Irish region in 2016 and the Kells man returns to defend his title at Moyvalley. He is one of a handful of former winners who will be in action this week at the event, amongst them is Simon Thornton (2011), who was edged out by McGrane last year and Michael McGeady (2013).

Higgins finished in sixth place last year but is hoping that conditions will be on his side this year.  “A few of the lads have been down for a practice round and they are saying the course is in great condition and a lot drier than is was last year,” said David.

“It was wet when we played last year and I wouldn’t be a fan of that, I like to see the ball running out on the fairway.  I’m delighed to hear the course is running a little bit firmer which means the fairways are tighter and there is more emphasis on accuracy and precision shots.  I am looking forward to it.  Based on last year, you have to think that 10 or 12 under par will win it again so that is the target that you have to set yourself.”

“It is a hard golf course, it’s a big event and a strong field and you will have to give it everything and play well.”   Higgins has one PGA title to his name, he won in 2012 in Mount Julliet.