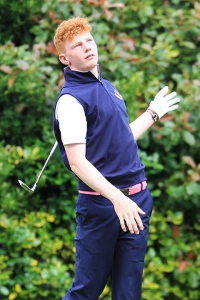 John Murphy had two matchplay wins today to advance to the third round of the North of Ireland Open in Royal Portrush.  They were two contrasting rounds, he needed a huge putt on the last this morning to get past Kiet Van Der Weele but made short work of Andrew Mulholland this afternoon.  Murphy always seemed to have a narrow edge over his opponent from Holland this morning but it took a 25 foot putt on the last to go one up and advance to the last 32.  This afternoon he faced Castlerock’s Mulholland and solid golf – and a good few birdies – saw him go five up at one stage near the end of the front nine.  In the end he closed put the match on the 15th with a 4&3 win.  He now goes on to play Derek Downie from Kirkistown Castle.  It’ll be another early start for Murphy with a 7.45am tee time.  He’ll be hoping for another long day tomorrow with two rounds scheduled to bring the competition down to the final four golfers.

Cathal Butler lost out on the 18th green this evening, he was beaten by Tandragee’s Ross Dutton on the 18th.  Butler had gone two down earlier in the match but had levelled it by the time they reached the 14th.  The home player persevered however and took the win on the final green.  Butler had overcome Andrew Clegg in the first round, he closed out the match with a 2 hole win on the 17th but had been leading for much of the match.  There was real disappointment for James Sugrue, an error led to him arriving on the tee one minute late and the match was awarded to his opponent Marc Norton from Belvior Park.

Rounds three and four take place in Portrush tomorrow with the final four golfers qualifying for the semi-finals on Friday morning.