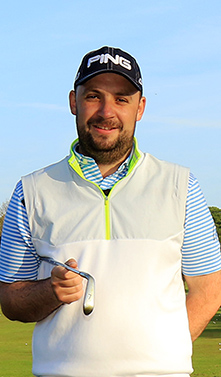 Davey Barry was in the top ten at the 36 hole Waled City of Derry pro-am over the weekend.  Davey shot a two under par 69 to finish on three under in a tie for 7th place.It’s Davey’s first top ten since May although the busy Douglas professional has been playing on a reduced schedule.  Davey has been a busy man this year, he completed his PGA studies earlier this year and he’s been busy coaching and teaching in Douglas over the past three months.  He’s made the cut in all 14 events that he has play in, and has earned prize money in nine events.

It has been a quiet year for Cork golfers, Michael Collins and Wayne O’Callaghan cut back their schedule in 2016 and this year both Cian McNamara and David Ryan have also reduced their number of events.  Davey will be back in action next week in the St Margaret’s and then it’s on to Rosslare where he’ll defend the title he won last year.  After that the PGA season will start to wind down, the last pro-ams on the schedule are Lutrellstown, Tulfarris and Galway Bay with the season closing with the €20,000 Connemara pro-am in late September.

Damien McGrane continues to lead the PGA Irish Region Order of Merit, the Wexford based professional has a sizeable lead over David Higgins and looks likely to win the Order of Merit at this stage.  Simon Thornton is in third place and David Ryan is the best placed Cork golfer in 15th place.