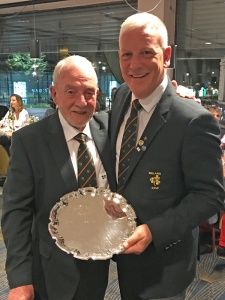 Douglas’ Karl Bornemann celebrated his Ireland selection by being part of the winning team at the European Senior Team Championships.  Karl was one of two new caps selected by Irish Captain Sean O’Leary, and both justified their selection winning matches at crucial points.  Bornemann had a great start to the competition in the strokeplay rounds.  On the opening day he shot a two under par 70, helped by an eagle on the par four 5th.  He calmly holed an uphill wedge from 100 yards to give himself a boost in his first round in an Irish shirt.  Karl was heading for an under par finish on day two also, but a bogey on the last meant that he signed for a level par 72, and he finished in a tie for 6th place after 36 holes.

Ireland finished in the joint top position on the team rankings alongside Scotland, and qualified for the top flight matchplay phase.  The format for matchlplay stage was one foursomes match and four singles.  In the quarter final they faced hosts Sweden and came away with a 3-2 win.  Ireland faced England in the semi final and they had a surprisingly easy win, taking three matches very early to secure the win.  Karl had the luxury of being called in on Saturday, but in Sunday’s final he led the charge.  Ireland were up against outsiders Denmark, they had a surprise win over Scotland in the semi-final.  Bornemann was first to finish in the final as he recorded a 5&4 win to put a point on the board for Ireland.  Eamon Haugh and John Mitchell continued their 100% foursomes record and it looked like another early win was in store for Ireland.  Jim Carvill and Adrian Morrow were both all square and looking strong and a win in either match would be enough to win even though Garth McGimpsey was losing.  McGimpsey’s match finished on the 17th and Carvill lost his match on the 19th bringing the score to 2-2.  It was now all down to Adrian Morrow, and his match was all square after 18 holes.  It would take another three holes to decide the match, and Morrow claimed the win on the 21st, and won the title for Ireland.

Karl pictured with family members after the win in Sweden

Karl was a long time waiting for his Irish call up, he was named as a non-travelling reserve on a home internationals team a few years back.  Having turned 50 two years ago he became eligible for the European’s.  He work on his game and his fitness and the hard work paid off when he got the call from Sean O’Leary.  Having played at the highest for his club and province, Bornemann wasn’t phased when he put on the green jumper.  “I was more nervous during the practice round than during the tournament but once the stroke play started it was just business as usual” said Karl.  “After the conservative approach during the qualifying round it took me a little time to find my rhythm in the matchplay.  I certainly felt that I had contributed to my loss against the Swedes with a couple of loose shots even through Per did play well.   I was solid against Steven East but had found top gear for the final and really enjoyed the challenge of a good opponent, a good course and what can only be described as horrendous conditions.  I was a couple under when the match ended and didn’t miss a shot all day.”

It’s been a busy year for Karl, as well as managing his own game, he’s also the Captain in Douglas.  He was delighted to have family members with him in Sweden to share the great experience.  And it was a hands on experience for the family members as they all ended up caddying.  “It was great to have my Dad, wife Judy and sons Bobby and Charlie there from Thursday on” explained Karl.  “Charlie pulled the bag on the first two days.  With the attritional conditions for the final day, Charlie switched to Garths bag, while Bobby did mine and Judy pulled the bag for Jim.  It was crucial in keeping clubs dry.”

And Karl saved the final comment for his team mate Adrian Morrow who “During extra holes while the rest of us were on tender hooks, Ado was the calmest man out there, a real class act.  And the birdie on the 21st was a fitting way to end a fantastic week.”