Douglas Golf Club was named today as the host for the European Seniors Open Championship next year.  The news was confirmed by the European Golf Association at the conclusion of the 2022 Championships, which took place last weekend in Estonia.

Douglas Golf Club’s General Manager John McHenry said the announcement is a proud day for the club.  “We would like to thank END_OF_DOCUMENT_TOKEN_TO_BE_REPLACED

Having made the decision to compete on the professional circuit in 2021, Sugrue will have lots to look back on in his amateur career.  He was a solid performer in team golf, representing Mallow, Munster and Ireland from 2012 when END_OF_DOCUMENT_TOKEN_TO_BE_REPLACED 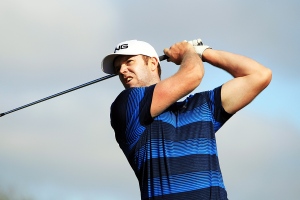 Peter O’Keeffe and James Sugrue are safely through to the matchplay stage of the North of Ireland, comfortably finishing in the top 64 from the mammoth field of 300 golfers.  O’Keeffe carded rounds of 68 and 70 over both courses in Royal Portrush   to finish on -5 and in a tie for 4th place.  The Douglas man fired in eight birdies and an eagle over the two rounds and if he can continue in that form he should extend his time in Portrush.  He’s currently in action against Haryey Byers from Walton Heath in the first matchplay round.

James Sugrue continued his good form with a top 13 finish in the strokeplay qualifier.  He shot rounds of 68 and 72 to book his place in the matchplay where he faces Marc Norton from Belvoir Park this morning.  There was disappointment for Cathal Butler as he finished just one shot outside qualification on +3, and there was no joy for END_OF_DOCUMENT_TOKEN_TO_BE_REPLACED

Douglas’ Karl Bornemann celebrated his Ireland selection by being part of the winning team at the European Senior Team Championships.  Karl was one of two new caps selected by Irish Captain Sean O’Leary, and both justified their selection winning matches at crucial points.  Bornemann had a great start to the competition in the strokeplay rounds.  On the opening day he shot a two under par 70, helped by an eagle on the par four 5th.  He calmly holed an uphill wedge from 100 yards to give himself a boost in his first round in an Irish shirt.  Karl was heading for an under par finish on day two also, but a bogey on the last meant that he signed for a level par 72, and he finished in a tie for 6th place after 36 holes.

Ireland finished in the joint top position on the team rankings alongside Scotland, and qualified for the top flight matchplay phase.  The format for matchlplay stage was one foursomes match and four singles.  In the quarter final they faced hosts Sweden and came away with a 3-2 win.  Ireland faced England in the semi final and they had a surprisingly easy win, taking three matches very early to secure the win.  Karl had the luxury of being called in on Saturday, but in Sunday’s final he led the charge.  Ireland were up against outsiders Denmark, they had a surprise win over Scotland in the semi-final.  Bornemann was first to finish in the final as he recorded a 5&4 win to END_OF_DOCUMENT_TOKEN_TO_BE_REPLACED

Karl Bornemann had a very good final round in the European Seniors in Spain today and claimed a spot in the top ten at the Golfclub Schloss Schönborn in Austria.  The tree-lined parkland course proved a tough challenge for the elite amateurs, there were just five sub par rounds over the three days.  Windy conditions also added to the challenge on the par 73 course.  The Douglas man opened with a 77 on Thursday and finished in the top 30.  He followed with two round of 75 which saw him over into the top ten after 54 holes.  Bornemann took third place in the event last year and was happy with his performance considering that he admitted that he didn’t have his A game.  “It demanded precision and afforded few opportunities” said Karl.  “There was lots of slope and grain on the greens so made it tough to convert the opportunities that did come.  If you pushed too hard, disaster awaited.”  Karl has had a busy year, he’s Captain in Douglas this year which has limited the amount of competitive golf that he can play so a top ten finish is a very positive reminder that he can challenge at the top level.  It’s also a timely boost as the AIG Senior Cup and Barton Shield qualifiers approach.  Mallow host the Senior Cup while Macroom is the venue for the Barton Shield in three weeks time.

John Murphy eagled his second last hole of the day today to jump into the lead after two rounds of strokeplay qualifying at the European Boys Team Championships in Czech Republic.  After opening with a bogey, John added two birdies to turn on -1.   He played steady par golf all the way back until a great eagle on the par five 17th saw him move to -3 and jump into the lead.  It was another good day for Ireland as they took four of the first five spots, and finished 23 shots ahead of second placed.

Murphy’s second round 69 followed a level par opening round and his two rounds will put him in good stead for tomorrow’s opening matchplay phase.  Ireland face Switzerland in the morning with second place Iceland facing Slovakia in the other semi-final.

The winner and runner-up teams of Divison 2 will be promoted to the European Boys’ Team Championship, which will be played at La Manga Club, Spain, in 2017.  Murphy will partner Kilkenny’s Mark Power  in the first of the two foursomes pairs, and the afternoon will see five singles matches being played to decide who goes trough to the semi-final.

In Flight B, Estonia END_OF_DOCUMENT_TOKEN_TO_BE_REPLACED

Cork’s Tom Cleary partnered John Mitchell (Tramore) in the quarter final of the European Senior Mens Team Championship an the pair racked up a 4&3 in their match against Switzerland.  Maurice Kelly and Adrian Morrow clocked up two singles wins as Ireland advanced into the semi-final.  Ireland finished the 36 hole qualifying phase 24 shots clear of the nearest challenger, taking the top seed spot by a considerable margin.

Sean O’Leary’s team now advance to a semi-final against France this morning.  Live scoring from the course is available through Golfbox

Tom Cleary (Cork Golf Club) shot a second round 69 to jump up to second place in the European Seniors Team Championship in Bulgaria.  Cleary was one of three Irish players in the 60’s as they claimed 1st, 2nd & 3rd places on

Cleary had five birdies and three bogies in his three under par round, and is second in a field of over 120 European golfers.  Arthur Pierce matched Cleary’s score to lead the qualifying part of the competition on -6.  Bangor’s Gareth McGimpsey is also on -4 after shooting a 71 and Adrian Morrow shot the low round of the day (68) in a 12 shot swing from the first round.

No details for tomorrow’s draw is available yet.

A one under par round of saw Cork’s Tom Cleary finish in fifth place after the first round of the European Senior Men’s Team Championships.  The competition is being held in Bulgaria at the Pravets Golf Club

Cleary got off to a great start with birdies on the 1st, 5th & 7th, although he did drop a shot on the 6th which saw him go out in -2.  He added another birdie on the 13th but two late bogies pegged him back to -1 and he’s in a seven way tie for fifth place.  Ireland performed very well overall, Arthur Pierce and Gareth McGimpsey both shot 69 to tie for second place and Maurice Kelly is one shot behind Cleary in 12th place.  John Mitchell and Adrian Morrow both had poor rounds today but have every chance of recovering tomorrow in the second round.

Cork has dual interest in the action in Bulgaria as Mahon’s Sean O’Leary is the Irish Team Captain.  After tomorrow’s round, all 20 teams will enter the matchplay phase which takes place over three days.