Progress is being made on the new five hole academy in Douglas, while work has also started on the redesign of the two practice greens in the distance.  Picture: Niall O’Shea

2018 promises to be a milestone year for Douglas, the southside club will open a brand new five hole short game facility and work should also conclude on a new practice facility and range.  The five hole short game area is currently under construction, all of the earthmoving and shaping has been completed and the greens and tee boxes have been laid out.  The team from DAR Construction have finished the first and second stages of work, a substantial amount of ground works took place in stage one including the installation of services, and after that several tonnes of sand were laid on the new greens and approaches to provide top quality playing conditions.  The seeding should take place early in the new year and it’s hoped the area will be opened for play in the middle of this year.  The new facility will be a unique feature for members, offering both practice and game options.

Each of the holes will have a number of features including bunkers, changes in elevation and a range of different distances.  The other works will see a redevelopment of existing chipping and pitching greens as well as a substantial upgrade to the large driving range.  The range upgrade will include a new USGA specification teeing area, and the profile of the range will change with the addition of several new target greens at varying distances.  The design work was carried out by renowned international course architect Jeff Howes, who was also responsible for the 1995 and 2006 development works at Fota Island.  Work has also commenced on the reconstruction of the chipping and pitching greens.  Designer Howes has completely redesigned the two greens and once the shaping work has been completed in the coming weeks the seeding and growing in will follow.

The development works have had a very positive impact on membership numbers in the club.  Douglas opened for new members in September and the applications outnumbered the available open membership places.  The club also won the Golf Club of the Year award at the recent Cork Business Awards.   Work on the clubhouse is also continuing although this remains at the planning stage.  In 2016 the club voted to remodel the existing structure, adding a new pro-shop and teaching area in an innovative design.  Although work has not proceeded as quickly as planned, it is expected that work will get underway this year.  2018 Douglas Captain Jim Kingston, Lady Captain Ann Rose and President Kate McCann will be looking forward to the fruition of several years of work by the club.  The new range of facilities should help Douglas to compete in team competitions, in 2015 the club win the Munster Junior Cup title and given the current and emerging talent, it safe to say that the new practice areas will be busy once the teams begin practicing.  Douglas PGA Professionals Stephen Hayes and Davey Barry are also looking forward to the opening of the new facilities.  “The new short game areas will be a huge benefit to members” said Hayes.  “It firstly gives members the opportunity to practice any part of their short game in a safe environment. The short game area will also replicate the playing conditions of the course so will be kept at very high standard.  It also acts as another facility within the club where members can meet and spend a few hours if they don’t have time to play 18 holes.  As there will be ample space it means we can work with students whilst other members of the club are free to use the facility at the same time.  The five-hole course will also be a great addition and a fun way to develop members short game skills whilst giving the opportunity to hold par 3 competitions.” 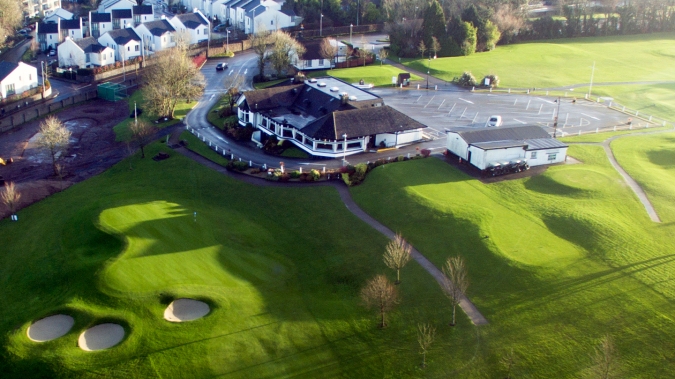 There are some clouds on the horizon however.  Douglas will face a few challenges in 2018, the planned M28 will have an impact on the course if the current proposed route goes ahead.  In formal   submissions last year the club highlighted that the new route would result in fourth and fifth holes having to be relocated.  In addition to that the club also stands to lose 3.5 acres on the southern boundary, that land was purchased by the club two years ago and part of it is set to form a new slip road for the proposed motorway.  A large lobby group of residents had led the local interests and over 100 submissions were heard at a recent Bord Pleanala hearing in November, an update from the appeal is due soon. 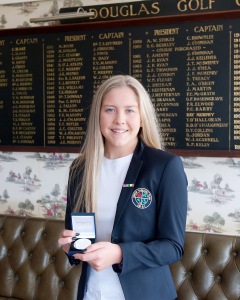 Byrne and Peter O’Keeffe both have early starts to their 2018 seasons as the Douglas golfers are travelling overseas for competitive golf this month.  Sara is currently playing in the Harder Hall Women’s Invitational in Florida and that follows the Orlando International Amateur Championship last week.  While it is an early start for Sara, she has learned from last year where she had an incredibly busy schedule that saw her travel to Italy, England and Scotland as well as playing a full schedule of Irish events.  “I have learned in 2017 that I played too many tournaments and got burnt out towards the end of the season, so in 2018 I need to play in less events to ensure I am energised and perform well in events on the ILGU and R&A circuit. I hope to progress in 2018 as much as I did in 2017.”  Such is Sara’s vision and planning, she’s already identified the 17 key events she plans to play in this year.

Peter O’Keeffe is also a busy man, he’s working hard on his game as his off season continues.  The Irish Amateur Open Champion is putting in the hours at the range and in the gym as he gets up to full speed for an upcoming trip to South Africa.  Peter was selected on the eight man Irish team to head to South Africa in early February.  The South African Stroke Play Championship at Pecanwood Golf Club from 6th to 9th February and the African Amateur Championship at Glendower Golf Club from 13th to 16th February.  O’Keeffe will also have a busy season ahead, the early domestic competitions will include the West of Ireland and the Lee Valley Senior Scratch Cup.  In May he’ll be hoping to go one better at the Munster Strokeplay in Cork Golf Club where he finished as runner up last year.  After that it will be a return to Royal County Down where Peter will aim to retain the title he won at the historic venue last year.  That was the win that saw O’Keeffe re-enter the elite amateur ranks.