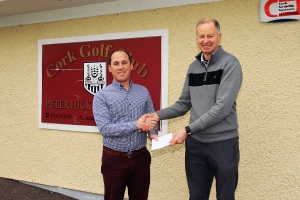 Despite the cold weather, the Munster PGA got the second half of their winter series off to a great start on Monday in Cork Golf Club.  Twenty Pro’s braved the cold winds but the course in Cork was in great condition, and benefitted from the recent week of dry weather.  Munster PGA Captain Cian McNamara was the winner on the day, the Monkstown Professional shot a one under par 71 to record his second win of the winter series.  He turned on two under par thanks to birdies on the second, third and eighth, and he dropped a shot on the index one fourth hole.  A bogey also followed on the 10th but he parred the remaining eight holes to remain in the red and sign for a one under par 71.  After a break of a few months, David Higgins made his seasonal debut.  The Waterville man had a beak towards the end of 2017 and was in Barbados for a pro-am in January.  Although he carded an impressive 72 for second place, the form was mixed.  He had an uncharacteristic six bogies but that was countered with four birdies and an eagle.  David was joined on his team by brother Brian and dad Liam.  They returned an impressive nine under par total which was enough to win the team prize.

While David admitted to some rustiness he was delighted to claim the team prize alongside Brian and Liam.  Third prize went to Dungarvan’s David Hayes and fourth place was shared by David Ryan and Diarmuid Fraser.  Munster PGA Captain (and event winner) Cian McNamara thanked both Peter Hickey and Matt Sands for making Cork available for the event and he also thanked Superintendent Anthony Gillis and his team for presenting the course so well this early in the year.  The Cork event as sponsored by Gary O’Flaherty from Cobra/Puma.  Next week’s event in Castletroy is weather dependent and after that it will be on to Dooks with the possibility of an additional event being played in Lahinch in March.  This year the final of event in the PGB Winter Series will again be held in Monkstown where the professionals will play for the Morgan O’Donovan Perpetual Trophy.  This year the committee have decided to run the event as a pro-am and a large turn out is expected for the competition.