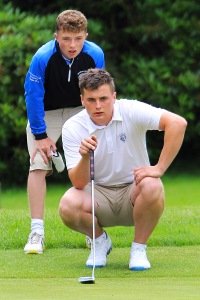 James Sugrue got his season off to the perfect start when he won the Fota Island Senior Scratch Cup last weekend.  Having missed the West due to a family bereavement this was his first competitive start.  After an impressive 2017, he was included on the Irish senior mens panel for 2018 and last weekend he set down an early marker.  He needed a strong finish as he was two over par after 16, but a birdie on the par three 17th and the par five 18th got him back to level par and that was enough to secure the win.  The birdie on 17 was unlikely, facing a very strong wind, Sugrue hit a three wood which went over the back of the green.  He chipped in with the second shot to give him some momentum on the final hole where he found another birdie.  Conditions were tough in Fota, the 7,000 yard Deerpark course played to all of its length in the unseasonal weather.  Second place went to Kinsale’s Cathal Butler just one shot back.  Jack Leacy from Dungarvan also finished on +1 and took third place with Daniel Rather (Dungarvan) finishing in fourth place.  Mitchelstown’s Sean Leonard won the best nett prize with a 73.

While attention turns to Lee Valley this weekend, there are plenty more competitive events on the horizon.  Muskerry hold their senior scratch cup over 36 holes on Saturday 28th April and the following weekend Cork will host the Munster Strokeplay.  The Kerry Scratch Cup in Tralee and the Douglas Senior Scratch Cup are both scheduled to take place in May.