The Lee Valley Mixed team made their own bit of history yesterday when they won the club’s first Cups and Shields Pennant.  The team were in Limerick Golf Club for the Munster finals of the Irish Mixed Foursomes, and hopes were high after coming through the tough South Munster qualifiers.

Lee Valley faced Doneraile in the semi-final and the tight match went to the wire.  The match was finely balanced on 2-2 and Lee Valley had an advantage with Ian Bohane and Rosemary O’Driscoll  holding a two hole lead after 15 holes.  The pair were unlucky not to win on the 16th, but after a great drive and approach on the long 17th hole, their par was enough to secure the win. 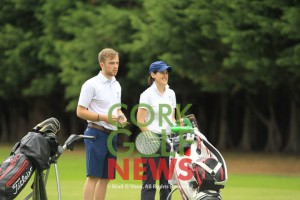 The final proved to be a tight match, and despite a good start from Lee Valley, Tipperary never let them out of sight.  Jack Boyd and Catherine O’Sullivan had trouble early on in the final.  Despite recording a crucial 3&2 win in the semi-final the pair lost in the afternoon giving Tipperary the first point.  Jason Galway and Colette O’Callaghan balanced the scorecard for Lee Valley, winning their match on the 17th.  As the match found it’s way onto the final four holes there was a huge Cork crowd out to watch the final three matches.  With almost parallel fairways it made for a great stadium finish.  Ian Bohane and Rosemary O’Driscoll won a second match for Lee Valley on the 16th but at almost the same time they lost the second match when Barry Egan and Helen Hodson lost on the 18th green.  That left John O’Neill and Jane O’Neill to decide the title.  The pair were having a goo round, and were two up after 14.  Tipperary managed to win the next two holes to level the match, piling the pressure onto the Lee Valley pair.  With momentum against them Johnno hit a great drive down the centre of the 17th fairway.  With Tipperary in the bunker the advantage shifted to Lee Valley.  Jane O’Neill played a great shot to the back of the green and when John played it down to three feet the Cork pair went one up.  After the tee shots on the 18th it looked like it would be a Lee Valley procession but a great approach from Tipperary meant the match was far from over.  The 18th green in Limerick is raised, with severe run offs on all sides.  Jane O’Neill chipped from the back of the green, making sure the ball stayed on the putting surface.  Johnno stood up for his putt, and the ball just shaved the hole, finishing a inch behind the hole for a five.  Tipperary were left with an unlikely 20 foot putt for par to half the match, but they missed and Lee Valley took the match and the title.

There were great celebrations on the green, and they continued in the clubhouse Club Captain Brian O’Donovan accepted the pennant.  There was a large crowd back in Clashnure when the team and supporters returned to Lee Valley later last night.  It’s Lee Valley’s first Cups and Shields pennant, and it comes in the year that they are celebrating their 25th anniversary.  While the Ladies have had provincial and national success recently, the Men’s club has contested several Munster finals over the past two decades but this was the first one where they emerged the winners.