It may have taken Kinsale over 100 years to win their first Munster pennant, but it was a much shorter wait for their second.  Just four weeks after winning the Jimmy Bruen Shield, Kinsale doubled their haul when they won the Munster Final of the AIG Barton Shield in Thurles last Sunday.  On paper Kinsale were up against it, in the semi-final they faced Dungarvan who had won the AIG Senior Cup title the day before.  In the semi-final they were up against it when Dungarvan stretched their lead the three holes early in the back nine.  The four Kinsale golfers battled back, and two birdies on the 17th turned the match to send Kinsale into the final.  After a quick break it was back to the first tee in Thurles to face off against a fancied Castletroy side.

In the morning semi-final Gary Ward and Keith Fitzpatrick were a few down in their match while Cathal Butler and Eric Rumley were a few up.  The roles were reversed in the afternoon, and Ward and Fitzpatrick took a commanding five hole lead at the turn.  Having won in the morning by two holes,  the back pair were always going to be up against it, the Castletroy pair of Andrew McCormack and Eamon Haugh, Munster and Irish players respectively were playing well and had won byseven holes in the morning.  The Castletroy pair fired in seven birdies on the front nine to lead by three at the turn, but the fact that Kinsale were ahead by five in the front match boosted Butler and Rumley.  They went on to win the 10th, and although they lost the 11th they won a great hole on the 13th with a suberb chip by Rumley that shaved the hole for eagle.  Although the front pair had lost one Kinsale retained their two hole lead.  Ward had a narrow miss for birdie on 18, that would have won the contest so it was down to the last match.  After a great par save on 17 Kinsale had a one hole lead to protect, and when Butler’s superb green-side chip finished four inches behind the hole on the final green, that sealed the win for Kinsale.

There was delight for Gary Ward after himself and Fitzpatrick closed out a good win to set the tone.  They dominated their game from the start and never looked like losing, and with the aggregate scoring it was crucial that they maintained their lead.  “Yeah we got off to a great start, we were 2 under through three and neither of us had touched the putter yet” explained Ward.  “We had four birdies in the first eight holes and just kept the good golf going.  Both myself and Keith got into rhythm and we became tough to beat so pressure wasn’t on our minds.”  Although they were going well, Castletroy came back at them and after losing the 16th, Kinsale were in trouble on the 17th, about 30 yards left of the green in a tricky spot.  A par looked unlikely but the Kinsale duo had other ideas and Ward played a great shot to five feet.  ““A lot of things were going through my mind on 17 but I thought about the amount of tricky up and downs we had made all day and that gave me hope.  Keith’s putting was top class so it made my chip easier knowing I just had to put it inside 15ft and we were making par, thankfully I pulled it off and Keith rolled in a clutch five footer for a half.”

Having come close to a Munster pennant a Fred Daly level, the Kinsale team of young guns finally made their breakthrough at senior level this year to reach the Munster finals.  To go and win it against two top teams even more impressive.  “I can’t describe what it feels like to win it” said Ward.  “We have an amazing group of lads and such great managers and supporters behind us, playing as big a part as the players.  One of the best things about it was winning it the year my mum is Lady Captain.  When she chose to take on the job I wanted to make it worth it for her, and if this isn’t enough we’ll have a chance to win an All Ireland.”

Relief and joy for Butler 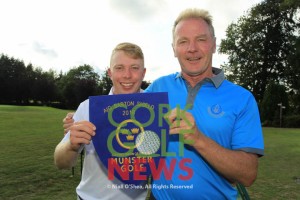 Kinsale’s Cathal Butler has won plenty as an individual, but a big team win had eluded the 21 year old for several years.  Kinsale had an agonising sudden death loss to Mallow in the Fred Daly three years ago, so it’s fair to think that tensions were high as Sunday’s final hit the final few holes.  There was an emotional reaction from the golfers and the supporters after Butler hit the chip that secured the win.  “I couldn’t think after it to be honest, the first emotion was probably relief” said Butler reflecting on the scenes on the 18th green.  “That turned into joy pretty quickly though when you get to celebrate with the lads and all the supporters from Kinsale.  To be honest, I never really felt like we wouldn’t get over the line because we haven’t been close enough.   We haven’t even got out of Cork the last few years so expectations were moderate even though we knew we had a strong team.”  Kinsale made the most if their chances, it was their first time to qualify for the Munster finals and they now have the coveted pennant that will serve to remind them of the win for many years to come.  “Nothing compares to winning as a team, it hit me when I had to hit a pitch on 16.  I knew it was close and there was a big support around the green and I thought to myself, everyone came up from Kinsale to support us, every eye is on me hitting this pitch – better not duff it!  Thankfully we got over the line and we all agree that if you can handle the pressure of trying to win from your club, the rest is a piece of cake.”

Kinsale now have the advantage of returning to Thurles for the All-Ireland finals in early October, having won twice on that course should help the young guns as they aim to add a green pennant to the blue Munster pennant.