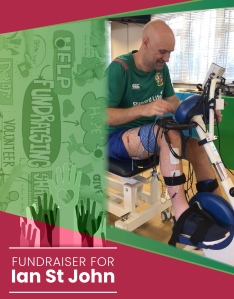 A large number of PGA Professionals in Cork have embarked on an ambitions fundraising drive to help Tramore native Ian St John as he battles to recover from a devastating illness.  Led by Cian McNamara, eight Cork based professionals have committed to raising €4,000 as part of a €40,000 nationwide fundraising campaign.  The project is aiming to collect €20 each from golfers, pro’s and supporters with the aim of collecting €4,000 in each of the ten selected regions.  The funds are being raised to purchase a piece of specialised equipment to help Ian’s recovery.

While all Munster PGA’s are involed in the campaign, the eight Cork Pro’s designated are Liam Burns, Peter Hickey, Ger Broderick, Paddy O’Boyle, Stephen Hayes, Alan Gleeson, David O’Sullivan, and Cian McNamara.  Each of the eight have sponsorship cards, and all Cork (and Munster) based PGA professionals have more details on the campaign.  The campaign will run for another three weeks.

More details on the fundraising campaign are included below.

PGA Professional Ian St John’s life changed forever on August 26th, 2016. In the space of nine hours, he became paralysed. An MRI revealed a massive tumor on his spine. His wife, Orla was eight months pregnant at the time and gave birth to a baby girl a month later while Ian was having his first round of chemotherapy. Spinal surgery and a brutal chemotherapy & radiation program was undertaken for the following 8 months as an inpatient at Beaumont Hospital.

Thankfully The cancer is in remission but Ian remains paralysed. He sadly resigned his position as Head PGA Professional at Rush, and moved his family back to Tramore to be close to family for support.  In July of this year Ian had regained enough strength to fly to England to visit Prime Physio (specialists in spinal cord injury physiotherapy) in Cambridge. The week long treatment was considerably intense using a FES (Functional Electrical Stimulation) devise, a stander “glider” and a motomed machine.  Ian returned home and two weeks afterwards he noticed a little stimulus in his left leg.  Ian is now pursuing this specialist neurological care and while treatment, physiotherapy, equipment and travel are proving expensive, they are also proving worthwhile.  The aim is to purchase the motomed, stander glider and FES machine (for use at home) and travel to Prime Physio every two months.